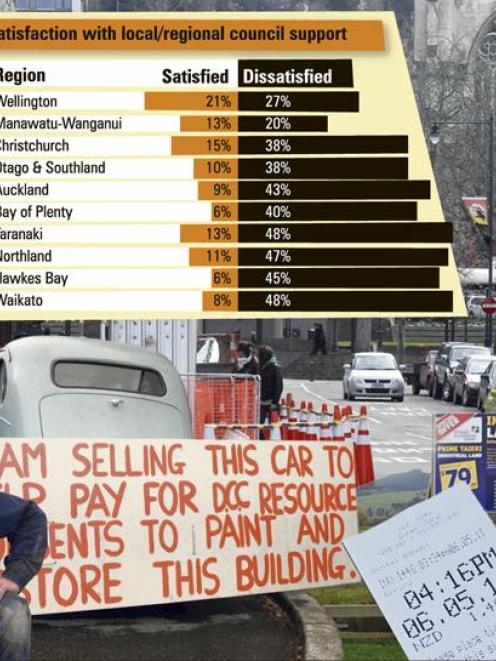 Local government in Otago and Southland is being urged to concentrate on getting the small things right in the wake of survey results released yesterday which show local authorities are not doing enough for business.

In Otago and Southland, 10% were satisfied and 38% were dissatisfied.

Otago Chamber of Commerce president Peter McIntyre said it was the small things that mattered to businesses.

He cited the parking dispute in South Dunedin, where business owners claimed they were being unduly targeted by parking wardens for parking across yellow lines outside their own businesses.

"The council needs to set up the infrastructure and incentives under which businesses can operate and businesses will do the rest," he said.

He was more likely to hear negative comments than positive because the positive experiences in dealing with councils were what his members expected.

"While policy can be changed for the right reasons, it can have a major negative effect on business."

The Dunedin City Council's parking strategy was a prime example, he said. Businesses were not properly canvassed and the introduction of the policy meant disruption to businesses.

The current dispute between businesses and the city council was around the developers' contribution.

The chamber wanted to work with councils to identify the problem areas and find ways to improve them, Mr Christie said.

The Clutha District Council seemed to be the most business-friendly in the region, showing it was responsive to the needs of businesses in its catchment.

"You are always going to get friction, because it is the councils' responsibility to set the rules and regulations, and entrepreneurs will always push those boundaries.

"But by far the most negative comments come from the general attitude of councils."

Asked if that meant councils or their staff members, Mr Christie said it was the individuals people dealt with at the various councils.

"That's a pity, because changing attitudes is the best way to bring improvement."

Often, council staff were not skilled at dealing with their customers, the ratepayers, he said.

One of the most frustrating areas was dealing with planning staff and the delays and financial costs in dealing with what often turned out to be minor problems.

Mr Christie was recently contacted by a member complaining about the delays in receiving a consent. A letter had been sent out pointing out a minor mistake in the application.

"Surely, all it would have taken was a phone call rather than having to wait for a letter. This person had a crew sitting around, at a cost, while the minor detail was ironed out."

Councils had to make rules for the greater public good and they had been landed with extra duties through central government devolving many functions to local government.

However, there was a need for better communication between businesses and councils, he said.

MYOB general manager Julian Smith said local councils seemed to be out of touch with the needs of business in New Zealand.

"With nearly half of the country's business owners expressing dissatisfaction with their local authority, and frustration growing over the last 12 months, it's clear that there is a major disconnect between what councils are achieving and what businesses expect of them."

Local councils seemed to be losing sight of the fact that to be successful cities, towns and regions, they must also be good places to do business, to sustain local economies, attract employment and encourage private sector investment in events, attractions and entertainment, he said.

From the feedback received by MYOB, council delays, regulation and compliance costs were a frequent source of frustration with the performance targets councils set themselves not meeting the standards of business.

The Government's decision to step in to manage Auckland's party central had highlighted some of the issues New Zealand's largest local authority had in meeting the expectations not just of the public but also the wide-ranging commercial interests engaged in the Rugby World Cup.

"With dissatisfaction growing with councils around the country, perhaps it is time to take a good look at the role of our local authorities and see what can be done to get them working better for business," Mr Smith said.