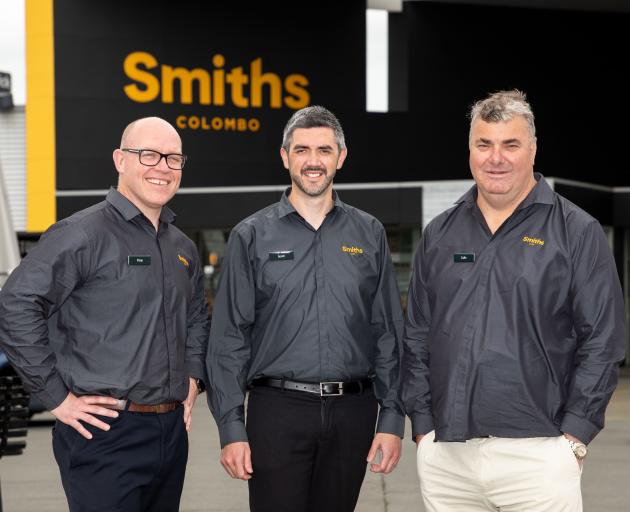 Smiths chief executive Tony Allison (left) and chief operating officer Scott Dawson and Polar Capital’s Colin Neal outside the new Colombo store. PHOTO: SUPPLIED
You can take Smiths out of the city and now you can also take the city out of Smiths.

The furniture and electronics retailer is trying to revitalise itself following the opening of its new flagship Christchurch store later today.

The company had already opened its first shopping mall store in Dunedin’s Meridian Mall in September, but it was waiting for its store to open in The Colombo, in Sydenham, before it revealed its big rebranding.

"We needed to renew ourselves and revitalise," chief executive Tony Allison said of the company that went through its second receivership earlier this year after Covid-19 struck, before being bought by new owner, Polar Capital.

Mr Allison said the company’s rebranding cut across three strategies — its new-look stores and name, its culture and its sales strategy.

The brand had a "cheeky grin" that came through the logo, Mr Allison said, adding the company wanted "heartland" New Zealanders to know what they were getting at Smiths.

"We are just making sure ... that heartland Kiwis understand that this is who we are, we’re 100% [New Zealand] owned, we buy Kiwi products, we sell top of the line brands."

Singing from the same songsheet, Polar Capital director and Smiths new owner Colin Neal explained why the company decided to drop the word city, which had been in the name since its beginning in 1918 as Henry Cooper Smith’s the City Market.

"We are de-emphasising the ‘city’ from the brand in recognition of everything we are not.

"We are not big ‘city’. Our most successful stores are not big city, they are regional, heartland New Zealand."

Mr Neal established the transport business Big Chill Distributors, which he sold to Freightways earlier this year and then acquired Smiths City on May 22.

He had also bought stakes in NZX-listed companies Moa and Mercer.

The option of buying the Smiths City company came across his desk as an opportunity, Mr Neal said.

"I like the large-scale retailing. I felt they had really good staff. It just needed a ... big tidy up, close some of the loss-making stores so we can make profitability from day one."

As the deal to purchase Smiths City was being negotiated, Mr Neal decided to push on with it despite Covid-19 being at its most disruptive point back in April.

"It did scare me a little bit."

There were no further plans to reduce any of its stores in the Otago region, Mr Neal said.

"Otago is very, very important to us, it’s a big part of our business."

In its new strategy, Smiths did not want to "bamboozle customers with buzzwords and specs" when it came to sales, Mr Allison said.

"We don’t need to shout. We don’t want to be shouting. We just want to be selling customers the good products they need."

They would be a "knowledgeable and straight-talking bunch of Kiwi, good buggers", Mr Neal said.

Mr Allison said it was vital they were able to open their major store with the rebranding leading into crucial sales days in the last quarter of the year.