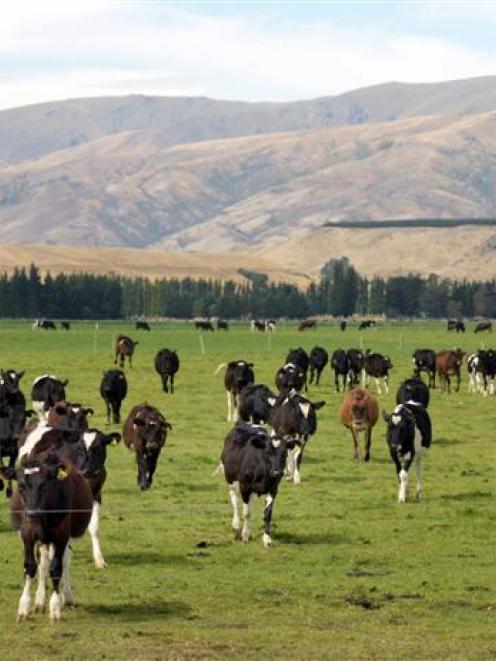 Sale of Fonterra wet shares will aid the economy. Photo by Stephen Jaquiery.
Nearly $500 million will be released into the economy as Fonterra farmer shareholders elect to sell some of their wet shares into this month's supply offer.

Craigs Investment Partners broker Greg Easton said the money would provide a welcome boost to the economy and it was confirmation that the Trading Among Farmers (TAF) system was beginning to work as planned.

A special trade of Fonterra shareholder units went through the market yesterday soon after Fonterra Co-operative Group, the world's largest dairy exporter, announced it had scaled back its offer to farmer shareholders to sell the economic rights of their shares into the shareholders' fund.

Wet shares are production-backed shares held by farmer shareholders, required to be held in accordance with the share standard for a season.

Mr Easton said the take-up of the original offer last year was very low but, given shareholders now had the ''clarity'' of a $7.92 share price, it made it much easier for them to decide. The Fonterra units were issued at $5.50.

''This is $500 million that's going to hit the New Zealand economy in one form or another. I guess it shows the flexibility TAF is offering Fonterra shareholders that they didn't have in the past and it's also something of a vote of confidence for the system.''

Given that there was scaling, there might be more liquidity in the market as those that really needed the cash - drought-stricken farmers - sold whatever shares that they had available, Mr Easton said.

Fonterra chairman John Wilson said about 20% of Fonterra farmers took advantage of the opportunity to sell some of their shares but the high level of demand meant scaling back. Fonterra would buy just below 80% of the economic rights farmers offered to sell.

''A significant number of farmer shareholders have thought through the potential benefits of using the additional flexibility provided by the changes made to our capital structure last year.''

Some had indicated they would use the offer proceeds to fund further growth of their farming businesses, while others said they would relieve some of the cash-flow pressure after this year's drought, he said.

Mr Easton said the supply would not increase the size of the shareholders' fund. Fonterra was buying the units that resulted from the supply offer and would redeem them for Fonterra shares.

The first supply offer saw farmers exercise some understandable caution but, with growing confidence in the new system, farmers were now ready to use TAF as it was intended, he said.

''The solid level of demand from shareholders to release some of the economic value of their shares shows they are using TAF to their benefit. Farmers are taking advantage of the greater flexibility it offers them in making decisions that impact the day-to-day running of their business.''

It also strengthened the co-operative as Fonterra was now able to make better use of its capital rather than, as the recent drought would have compelled it to, distribute it as farmers redeemed their shares, Mr Brown said.