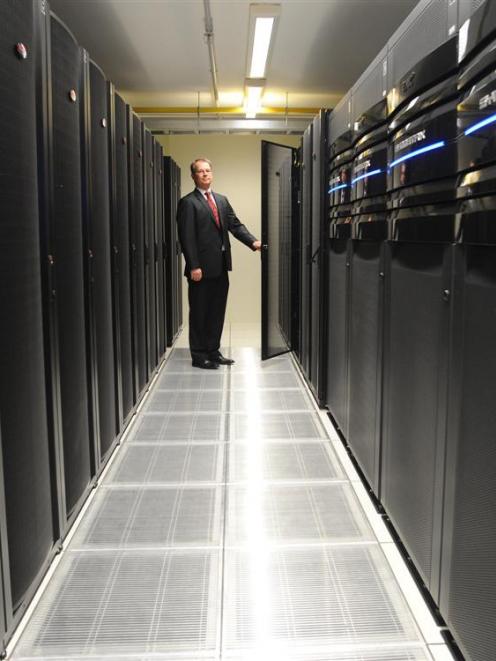 Behind the doors of row upon row of smart, sleek, wardrobe-sized black cabinets standing in a medium-sized room is almost $5 million worth of the latest computer hardware.

The high-capacity data storage system and 32 computer servers installed over the past month will handle all student and corporate staff requirements, including the university website, student administration and student desktop services, as well as providing some storage space for research information.

The upgrade project also includes the creation of a second electronic nerve centre to provide back-up for the existing data room, and improvements to the network to significantly increase the speed of data transfer between servers and the data storage centres.

Over the next few months, some of the new storage units and servers will be transferred to the old data centre and the elderly hardware there retired.

It is the first major upgrade for seven years.

Mr Harte said yesterday he expected another upgrade would not be required for another five to seven years.

"This is very smart technology."

The 32 servers will do the work of the university's existing 300 servers, saving both space and energy, he said.

The upgrade, a year in the planning, was needed to cater for increased demand, Mr Harte said.

The university now ran the third largest IT operation in New Zealand behind the University of Auckland and Fonterra.

The physical size, capability, storage capacity and comparatively low cost of the new equipment is a major advance on the university's first computer, installed in May 1966.

Emeritus Prof Brian Cox, who was director of the university's computer centre in 1966 and oversaw the installation of the machine, said yesterday it took up about 56sq m - about half the size of a small house - and cost hundreds of thousands of dollars.

It had 16KB of storage space.

"We thought that was a lot, but it is only about 1000th of the space in an ordinary laptop today."

The computer was the third installed in Dunedin, Prof Cox said.

Cadbury's had the first and the Dunedin City Council the second.