Value of LPC stake up for Port Otago 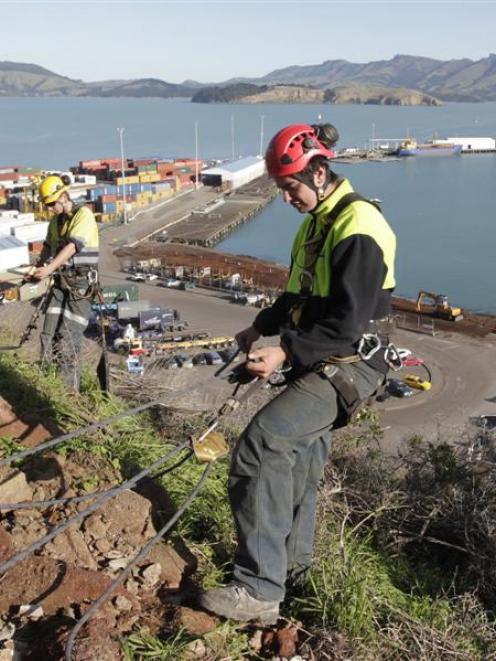 Geotech workers Jayde van Dissel (left) and Jack Wilkinson prepare to abseil down a cliff above Lyttelton Port of Christchurch to dislodge rocks above the port, in June 2011, following the February earthquake. Photo by The New Zealand Herald.
Port Otago's 15.5% stake in Lyttelton Port of Christchurch (LPC) has grown in value by $5.6 million in recent weeks, in the wake of an almost 30% share spike since early April.

However, frustrations remain for Port Otago over the lack of information from LPC on its insurance claims, which will be vital to the port's rebuilding, and ultimately, shareholder value.

Port Otago took its 15.5% stake in LPC, which it bought for $2.30 per share by March 2007 for $37 million, essentially as a takeover blocking stake to stymie a proposed Lyttelton sale at the time.

When contacted, Port Otago chairman Dave Faulkner said he was ''very pleased'' that Port Otago's $37 million investment was up 15%, or $5.6 million, to $42.6 million yesterday.

He reiterated, when asked, that Port Otago would continue to hold the LPC stake as a long-term investment, in spite of the lack of any dividends.

Port Otago ''continued to be frustrated'' by the lack of information from LPC on the insurance component of the rebuilding costs, he said.

''We're no better off knowing the costs of the reinvestment; the [amount of] insurance,'' Mr Faulkner said. Craigs Investment Partners broker Peter McIntyre highlighted that bidding had increased the share price but on ''very, very light'' trading volumes. The buyers were looking at holding shares long term in an infrastructure company ''which will always be there''.

''I'd be very surprised if there were any dividends in the next 12 months. That [cash] would be reinvested back into the rebuild,'' he said.

LPC in still in negotiations with insurers and in rebuilding mode, following major infrastructure damage caused in the Canterbury earthquakes, and is not paying dividends. Its major 80% shareholder is the Christchurch City Council. In late February, LPC issued after-tax profit guidance that the full year to June was expected to be in a range of $13 million to $15 million, but in early May upgraded and narrowed that guidance to a range of $15 million to $16 million.

The upgrade was prompted by LPC having handled record container numbers, including a March record of 34,877 TEU (20-foot equivalents), growth in other trades and having attracted two new bulk break cargo services.