A Dunedin contractor says a video showing one of its workers urging his colleague to run down a cyclist is ''extremely embarrassing'', and it has launched an investigation.

The expletive-laden video showed two employees of Clearwater Civil sitting in the cab of their truck as they travelled behind a cyclist in Portobello Rd on the Otago Peninsula.

It was filmed by the employee sitting on the passenger side of the truck, who urges the driver to run over the cyclist, before unleashing a torrent of abuse at the unwitting rider.

The video was posted on a Dunedin social media page by a Clearwater Civil employee, before it was downloaded by another cyclist and supplied to the Otago Daily Times. 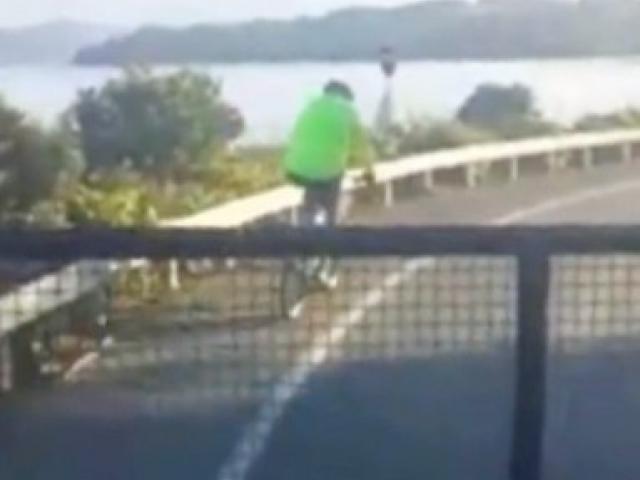 A still from a video showing two Clearwater Civil contractors threatening to run down a cyclist in Portobello Rd, Dunedin. Photo: Supplied

A Clearwater Civil spokesman said the video was ''completely contrary to the culture we try to build in our team,'' and it had launched an investigation.

''The video is extremely embarrassing.

''The allegation is viewed very seriously and there is an employment investigation under way.''

The spokesman said he was pleased it appeared the driver had shown proper consideration, slowing to accommodate the cyclist on the narrow road.

The man who supplied the video said he had spoken to the owner of the excavating contractor and his concerns were taken ''professionally and seriously'' by the company.

A regular rider on the road, the man said recent comments on a Dunedin social media page about cyclists were disturbing, and the video showed the depth of anti-cyclist sentiment among some motorists.

"Most of the comments were along the lines of a lynch mob mentality.

"As a regular road cyclist this makes me even more nervous on the road with these type of drivers out there."

Yes there are jerks among motorists and truckers. Taxi drivers are frequently abused too. Sometimes passengers can be confused or indecisive and the safest thing for taxi drivers is to slow down or pull over to resolve communication problems. Some passengers do not even know their left and right hand. But there are also idiots in cycles. Not uncommon to see them pull onto footpath and cross against the lights. They sometimes abuse motorists too.

I noticed through the video that the cyclist is moving across the width of the bike path instead of staying roughly centred. Near the end of the video the cyclist is pretty much touching the white line. Such actions are dangerous for cyclists and if undertaken by a motor vehicle would have all manner of the public screaming to stay centred in your lane. I also wonder why the cyclist is not using the separated cycle lane instead of the shoulder lane. Isn't that why the separated cycle lane & footpath were constructed?

That said, the behaviour of the truck passenger is absolutely disgusting and needs to be slapped down hard by the employer and the friends/family of that passenger. It is clear that the passenger has no consideration for the lives of others. The driver would never be able to squeeze that truck past the cyclist while the cyclist is riding in the shoulder cycle lane. The driver is doing the right thing by waiting for a clear location to pass the cyclist, as frustrating as that can be at times.

Yes, cyclists are entitled to use the road, and I don't suggest that injuring them is a valid way of venting frustration. The problem is that I'm left scratching my head as to why the cyclist didn't use the combined cycleway and footpath a metre or so to his left.

I'm sure a lot of heavy vehicle drivers, who are very aware that someone is paying a good deal of money for their time and the use of some very expensive plant, get pretty frustrated when they come across situations like this. Frustration often turns to anger and sometimes, like here, to yelling at the windscreen. Ironically, it's quite likely that the original frustration came from a concern for the safety of the cyclist. HV drivers have a stressful time trying to keep other road users safe.

I've seen plenty of commentary on this where cyclists claim that they are going too fast to use the shared path. Doesn't convince me. They have brakes and a good deal more situational awareness than most car drivers, visibility is very good for most of the route and foot traffic is almost non existant.

Given the option of using the road or a couple of million dollars worth of cyclelane I know which I'd choose.

This firm has been terrorising cyclists and joggers on the peninsula for years.