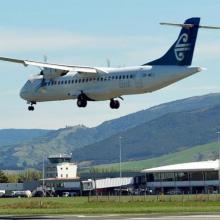 Photo: ODT
A man left stranded in Queenstown had to fork out for a night in a hotel and risked missing a flight home to China after a raft of flights were cancelled last night.

In a statement, Airways New Zealand said it did not have sufficient staff to safely operate the Queenstown air traffic control tower from 7.30pm, which was nearly two hours earlier than it would usually stop operations.

"Airways has worked through all options to provide cover as normal, and has worked with airlines to investigate whether service could be retained.

"However, we have not been able to find a suitable and safe solution for the travelling public."

Emmett Zhang, who was one of the passengers affected, described the situation as "terrible".

"There are so many things we need to change. It's very expensive."

He was due to depart for Auckland on a Jetstar flight last night after a three-day holiday in Queenstown, but instead had to pay for a hotel room and could not fly out until this afternoon.

By the time his flight arrived in Auckland, he would be rushing to catch his next flight to China.

He said it took "a long time" before he was able to speak to someone from Jetstar on the phone about the situation, and it was a bad end to an otherwise good New Zealand trip.

In a statement, Queenstown Airport said the terminal would remain open until 10pm "to ensure all affected passengers were looked after and had made alternative arrangements".

The control tower was expected to reopen today at 6.10am as scheduled.

Flights in and out of Queenstown Airport were also affected on Thursday, with several disrupted due to bad weather and strong winds.

It is due to go live in 2020 and will be operated at first by controllers based at the airfield, before later moving to a centralised hub providing services to a number of regional locations.