Thousands of parents, pupils and teachers have marched across the South and teacher unions have vowed it will all happen again if the Government doesn't give them better pay and conditions.

The Octagon was packed with more than 2000 teachers and suppporters  just after midday and chants of "fund our future" could be heard as marchers made their way into the Octagon as part of strike action which affects an estimated 773,000 children.

The crowd marched through the central city to the tune of jazz band playing When The Saints Go Marching In.

A long line of regional union delegates gave speeches, calling for the Government to address the issues that the teaching profession faces.

"What we want is for our students to have the educational opportunities that they need and deserve, with great well-trained and well-supported teachers to provide these opportunities,'' PPTA Otago region chairwoman Pauline McNeill said.

"For 2019 to truly deliver, we need our fair claims to be addressed and all of our collective agreements settled.

"Together, we can bring out the best.''

​There was a heavy police presence in the Octagon ahead of the march, with roughly a dozen officers present.

Teacher unions have vowed to strike again if the Government doesn’t give them better pay and conditions after today’s mega-strike.

NZ Educational Institute president Lynda Stuart told about 8000 teachers and supporters who packed into Auckland’s Aotea Square that "we have come too far not to go further".

"We have done too much not to do more," she declared.

"The situation we are in is so serious that I’m prepared to keep on going until we get the outcome that we need for teaching, leading and learning.

"That means more strike action if the Government doesn’t take urgent action to fix this now.

"Of course none of us wants to strike and I hope that the Government will hear us and that they will act." 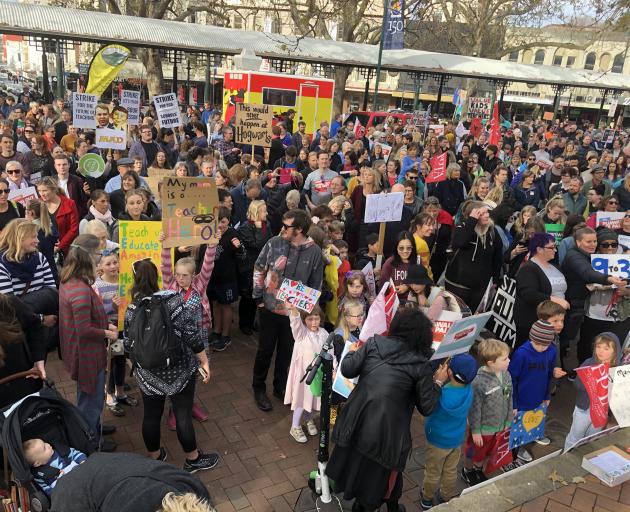 ON THE MARCH IN THE SOUTH

Meanwhile, many more teachers and supporters are taking part in marches and protests across the rest of the South.

Earlier, Hawea Flat Primary School principal Sue Heath told marchers in Wanaka that  "none of us want to be out here striking'' but they had "no choice".

''These issues facing the education sector have to be addressed now.''

Another marcher in Queenstown said: "We're angry, fired up, and ready to fight."

​The Ministry of Education said 1229 schools, or 51% of the 2409 state and integrated schools with union members, had notified it so far that they would close.

The actual number closing is expected to be much higher because many schools have not told the ministry what they plan to do.

The strike is the first by secondary teachers since 2010-11, when industrial action was cut short by the Christchurch earthquake, and the first national joint action ever by unions representing primary, intermediate, secondary and area schools.

The Ministry of Education has offered pay rises of 3% a year for three years, and an extra step at the top of the salary scales, to both the PPTA and the primary teachers' union, the NZ Educational Institute (NZEI). It says the offer would cost taxpayers $1.2 billion over four years.

But members of both unions have rejected the offer because the ministry hasn't offered anything to relieve teachers' workloads by providing more classroom release time.

In Invercargill up to 600 teachers, children and supporters gathered outside the Civic Theatre this morning to protest the Government's offer for better conditions and pay.

The crowd held signs and banners as they marched around the block towards the war memorial, up Dee St, turning on to Esk St and back. 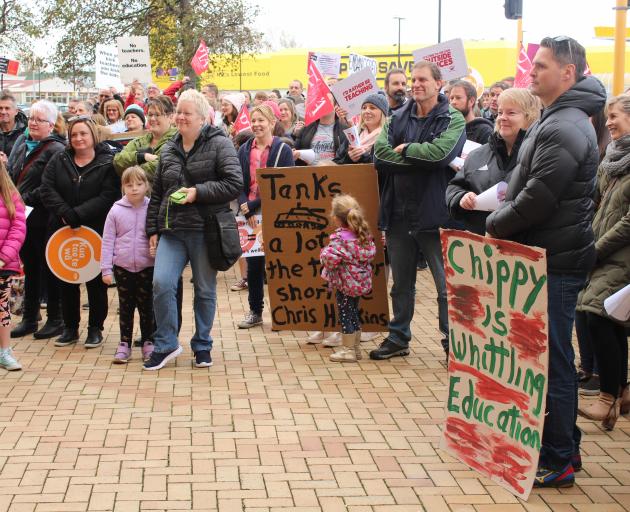 The marchers cheered as passing vehicles tooted horns in support.

"You spend a day in my job and see if you want more pay."

Motorists honked their horns in support as teachers held banners encouraging residents to "Toot for Teachers". 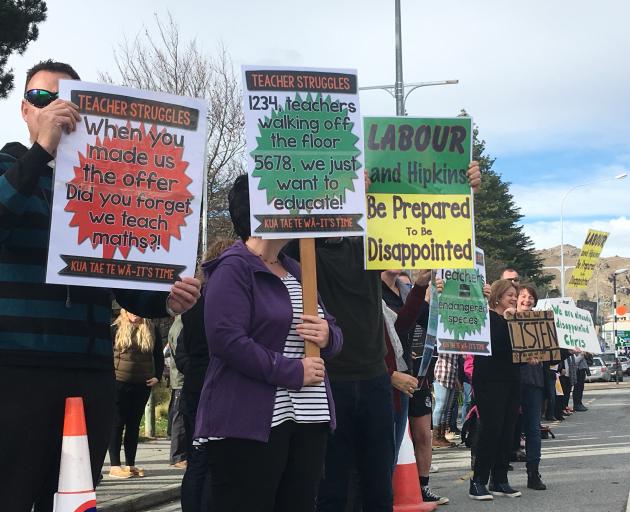 "From a local point of view, there is a real shortage. Teachers at Dunstan are nearing retirement. Locally it is really going to pinch."

In Cromwell, a handful of teachers positioned themselves with banners under the iconic fruit sculptures.

Another 30 school staff were more vocal as they marched through Cromwell’s Mall chanting "One-Two-Three-Four, teachers walking out the door."

"It is about the teaching crisis and keeping teachers in the classroom.

More than 100 teachers, principals and parents are marching from Queenstown’s Events Centre to State Highway 6, where they’ll line the side of the road.

They’re chanting as they march: "what do we want? Fair pay. When do we want it? Now" 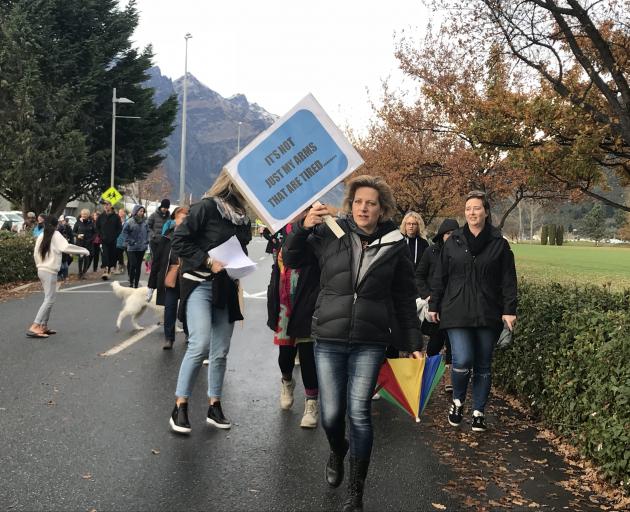 More than 100 teachers, principals and parents are marching in Queenstown. Photo: Daisy Hudson

"We're angry, fired up, and ready to fight."

The marchers received plenty of toots from passing motorists before the march finished about 11.40am.

About 100 Upper Clutha teachers rallied in Wanaka at 11am to be addressed by Hawea Flat Primary School principal Sue Heath.

Ms Heath said ''none of us want to be out here striking''.

''Not only does it cause significant financial hardship to us and our families, but it's also a major disruption for our children and their families.

''We have no choice.

''These issues facing the education sector have to be addressed now.''

About 170 teachers, including family members cheered at George Jones memorial park in lower Thames St this morning as NZEI field officer Paula Reynolds told them they were part of the largest strike action in New Zealand history.

Mrs Reynolds said she watched teachers work 60-plus hours as their class sizes grew out of hand -- and she watched their health and well-being suffer as a consequence. 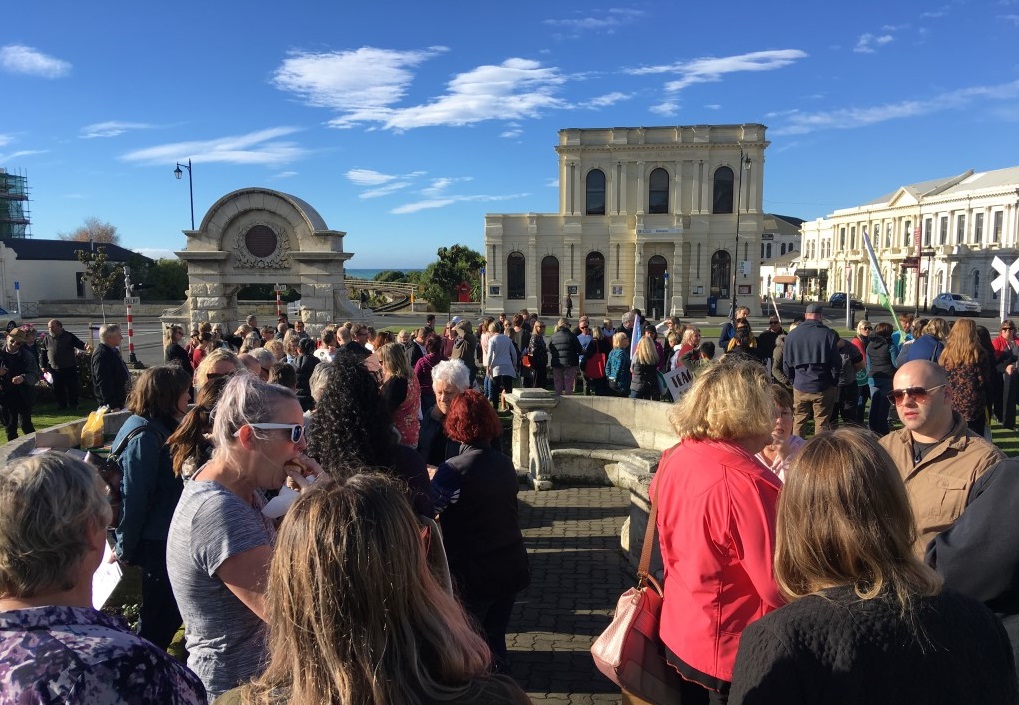 PPTA and NZEI members gather in Oamaru today. Photo: Hamish MacLean
The New Zealand Post Primary Teachers' Association (PPTA) branch chair at Waitaki Boys' High School Emma Prosser said until now the PPTA had not been "overly active" in Oamaru, and many members did not want to travel to Timaru for a larger planned action today.

But to raise the profile of the association and its issues in Oamaru, the three local high schools decided to gather at the park in the town's central business district and join primary teachers whose pressures "are still the same".

At Waitaki Boys' 30 of 36 teaching staff, including the special education needs manager and some senior management, were members of the association.

Primary school teachers, who last took strike action in Oamaru in May, rallied earlier in the day before joining secondary school teachers at the park, chanting slogans on a march through Oamaru's central business district. 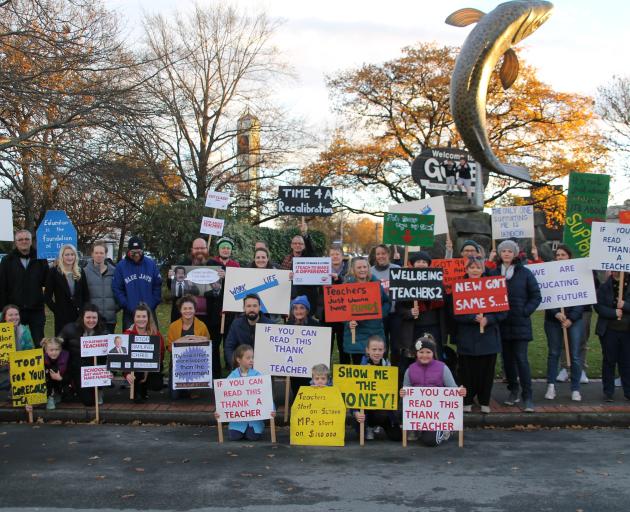 The group join the rest of the teachers in the nation who are on strike today. They were met with toots and cheers of support from community members who drove past the group.

Teachers from Roxburgh and Millers Flat school joined forces to march along the main street of Roxburgh this morning.

Branch chairwoman of Roxburgh PPTA Wendy Gunn said an ageing workforce had not been addressed leading to shortages in the profession. 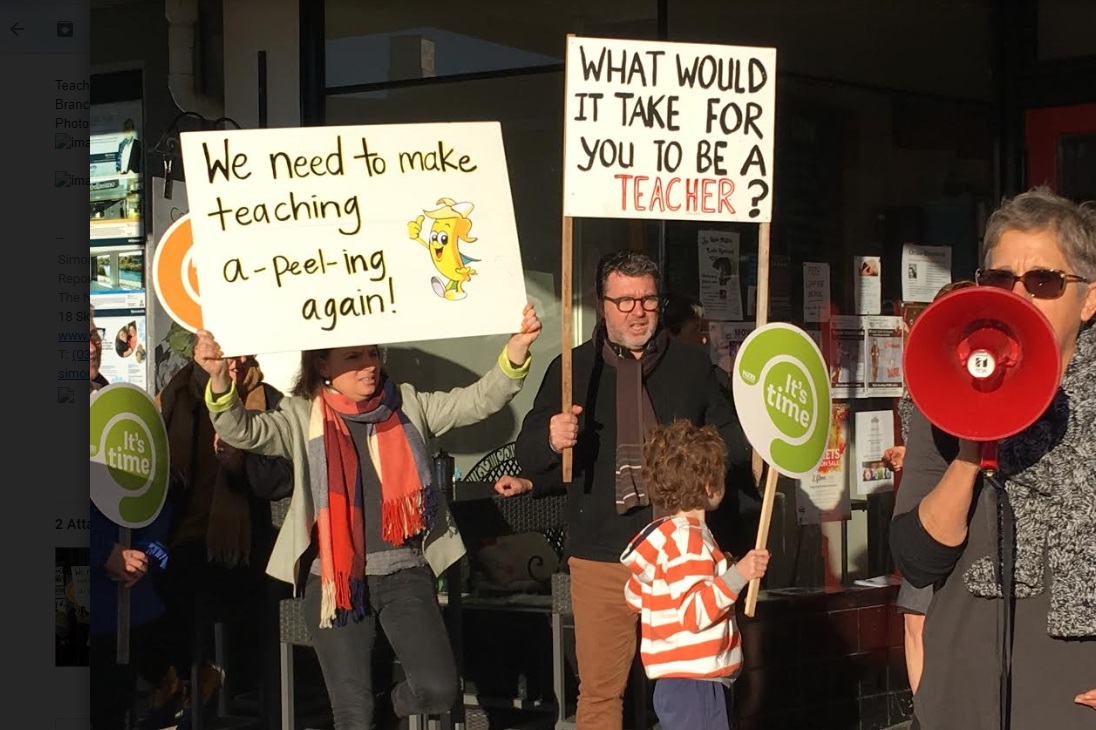 Dunedin: Noon-2pm: March from the University of Otago Dental School to Octagon. Buses will also bring staff from schools in Balclutha and Milton.

Gore: 11am-1pm: Rally at ram statue before visiting other landmarks around the town.

Invercargill: Rally at the steps of the Civic Theatre before dispersing to various points around the city

I support their right to strike, but their demands are 'a bit over the top'. Teaching is one of the best professions for work/life balance, and that is me speaking as someone who was in teaching for a time. Most private sector workers would love the wages/hours/flexibility and stress levels. The only issue are Auckland rents/house prices but that is government policy that affects them over the ditch.

Better than being lied to but that's like water under the bridge 's isn't it.
Would rather hard Labour than punitive n any day.

A lot of unrest in the country / more will follow .the people in the street are waking up/ to the no action left

Nurses, teachers.... All would like more jobs and more money. Justified or not, it is impossible to satisfy everyone after such a backlog was created by the past governments. Accept what you can reasonably get, people, and be content. Give it a chance instead of squeezing the last drop of blood out of a government that is doing its best, far more than the past ones. Don't remember this govt for that it did not give you everything you wanted, but that it gave you way more than you ever had.