Rubbish is left scattered across the Village Green in Queenstown after the Crate Day on Saturday.PHOTO: PHILIP CHANDLER
Queenstown Police are floating the idea of a 24-hour ban on public drinking in the wake of last Saturday's Crate Day chaos in the resort.

But Queenstown Lakes Mayor Jim Boult says he hopes a total ban can be avoided so responsible drinkers are not punished for the antics of a few.

Eight police officers, including additional staff, kept an eye on the 300 people who descended on Queenstown's Village Green to celebrate Crate Day, a promotion created by The Rock radio station to celebrate the first weekend of summer.

While there were no arrests, the crowd left a huge mess for council contractors to clean up on Sunday morning.

The situation has sparked a storm of comment on social media.

Otago Lakes-Central area commander Inspector Olaf Jensen said yesterday police were seeking a meeting with the Queenstown Lakes District Council later this week, at which they would seek tighter restrictions on public drinking.

Discussions would include a 24-hour-a-day, seven-day-a-week ban.

``A 24/7 liquor ban would be supported by police, but we obviously need to look at the shape of that liquor ban, what areas does it cover and things like that,'' Insp Jensen said.

``That's a discussion that needs to be had with the council, who are the legislative power behind this.''

Insp Jensen did not witness Saturday's event but saw videos and photos later - which he shared with Mr Boult - of the mess left behind.

``We certainly don't want a repeat.''

Steve Wilde, the general manager of lobby group DowntownQT, said on Sunday that Saturday's impromptu gathering had probably spelled the end of public drinking in the resort.

Mr Boult said yesterday he found Saturday's antics ``pretty disturbing'' and did not want to see them happen again.

But he hoped the council could find a middle ground between the current rules and a total ban.

``I guess the sad part is, if you have to go to a ban it stops families having a picnic on the beach and having a quiet glass of wine or a can of beer - they all get swept up in the same thing.''

He was unsure of the clean-up costs, which would be paid for by ratepayers.

Mediaworks Southern Lakes general manager Rik Van Dijk said Saturday's partying was not officially sanctioned by The Rock and Crate Day had taken on a life of its own.

Asked if it was a good look for the company, he said: ``I was as disappointed as everyone to see the mess left behind and we're certainly not advocating that.''

The company had shouted lunch for the council contractors. 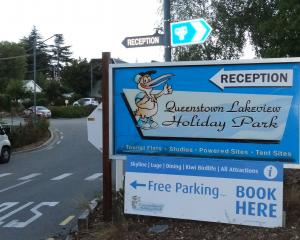 This incident was unfortunate but the Lakes District Council should be careful how they treat this request from the police. I have noticed the growing powers of the NZ Police over the last few years to make the law rather than to just enforce it. There is a very fine line between a free state and a police state as history shows. It is time this growing power of the NZ Police was challenged. The democratically local council has the right to do just this and send a message that the police in this country do not set the rules.History also shows that the human race will always drink alcohol no matter what restrictions are imposed.

A day at the Human Races. The police are seeking a ban on public drinking, not all drinking. Oddly, there are members of the public who don't drink in public. The police are representing them. History also shows that licence to drink more alcohol brings on a Police State.