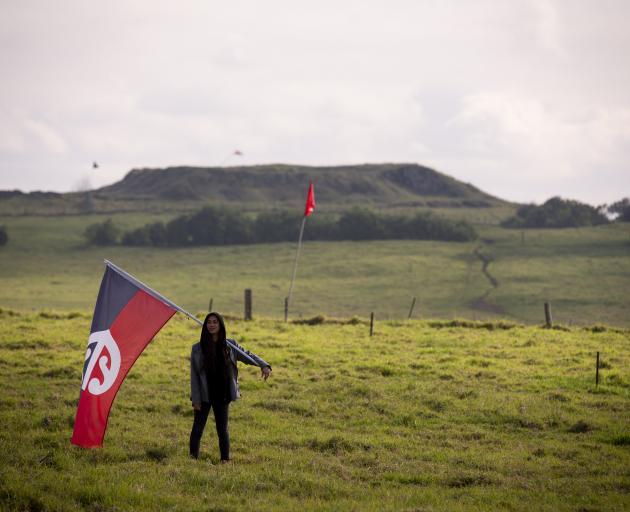 A flag-bearing protester takes a stand at Ihumatao last month. PHOTO: NZ HERALD
Murray Rae asks if justice has been served at Ihumatao.

The dispute currently being played out at Ihumatao will take Solomon-like wisdom to resolve. Given that all major parties involved, Fletcher Construction, the kaumatua who negotiated a deal with Fletchers, and the "protectors of the land" led by Pania Newton, are all acting legally and are all making reasonable claims concerning their interest in the land, there isn't an easy solution in view.

The history of the land is clear enough. Before the arrival of European settlers it was part of the tribal land of Te Akitai Waiohua.

In the late 1850s Te Akitai Waiohua became a part of the Kingitanga movement which aimed to unite Maori, resist the forced acquisition of Maori land, protect Maori interests, and present a united front in negotiations with the Crown.

In 1863, the Chief of Te Akitai Waiohua, Ihaka Takanini, who had been a land assessor for the Crown and keeper of the Maori hostels at Onehunga and Mechanics Bay was stripped of these roles and accused of being a Kingitanga sympathiser and rebel. Land at Mangere and Ihumatao was confiscated by the Crown, and Takanini, along with 22 members of his family, including children, were consigned without charge to a military camp in Otahuhu. The land was subsequently sold into private ownership.

Those gathered at Ihumatao today appeal to this history in demanding that the land be returned. The land was taken without any compensation from those who were in legal possession of it; therefore it should be returned. The scales of justice should be balanced. That is a fair and reasonable argument.

The notion that justice involves a balancing of the scales is an ancient and venerable one. The image of Lady Justice holding the scales dates back to the Egyptian goddess Maat, and was replicated later in the Greek goddess Themis, and in Iustitia the Roman goddess of Justice. It is the image still used to represent the aspirations of Western judicial systems. The principle of the balanced scales is also found in the Bible. The lex talionis represented in the precept, "an eye for an eye and a tooth for a tooth" instructs Israel to seek a punishment or redress that fits the crime, and reins in our human tendency to excessive retaliation in the face of wrongdoing.

But there are other notions of justice to be found in the Bible.

The Hebrew word tsedekah and the Greek dikaiosune, both inadequately translated into English as righteousness or justification, are directed towards the re-establishment of right relationship.

Perhaps something like that was in view when the kaumatua at Ihumatao, acting on behalf of some but not all those who whakapapa to Waiohua, decided to do business with Fletcher Construction, to accept the return of eight hectares of land and the provision of 40 homes for families of the iwi involved.

I don't know that for sure, and there are certainly others who say that the kaumatua accepted the deal only because they had lost the larger battle for real justice.

What I am more sure of however, is that the notion of justice eventually settled upon in the New Testament, and represented both in Jesus' teaching and in his example, involves the repair of broken relationships.

Typically, such justice involves no mere balancing of scales but the giving of vastly more to those who have been wronged. Consider for example, the fraudulent tax-collector Zacchaeus who, following the grace shown to him by Jesus, determined to give half of his possessions to the poor and to pay back four times the amount he had fraudulently acquired.

We might not be capable of that as a nation in respect of the injustices inflicted upon Maori but we could certainly aim for a justice that seeks, among other goods, to restore right relationship. Telling the truth about our past and repentance are key components of such restoration. So, too, is the liberation of those sinned against from their bondage to injustice and the opportunity to flourish as a people once again. A Maori word for justice, manatika, to make right or restore mana, is apposite here.

There are some who argue that we must move on; let bygones be bygones.

It wasn't "us" after all, who took the land, and it wasn't present generations of Maori who were evicted, or who were wrongfully imprisoned or killed during the era of land confiscations.

That sentiment ignores the fact that present generations of Maori continue to suffer the deprivation, and successive private owners continue to enjoy the benefit brought about by the injustices of the past.

And so, needing Solomon-like wisdom, but perhaps more simply, compassion, humility, and a willingness to tell the truth about our past, present generations of New Zealanders have much work to do yet in seeking right relationship with the first inhabitants of the land.

- Murray Rae is a professor of theology at the University of Otago.