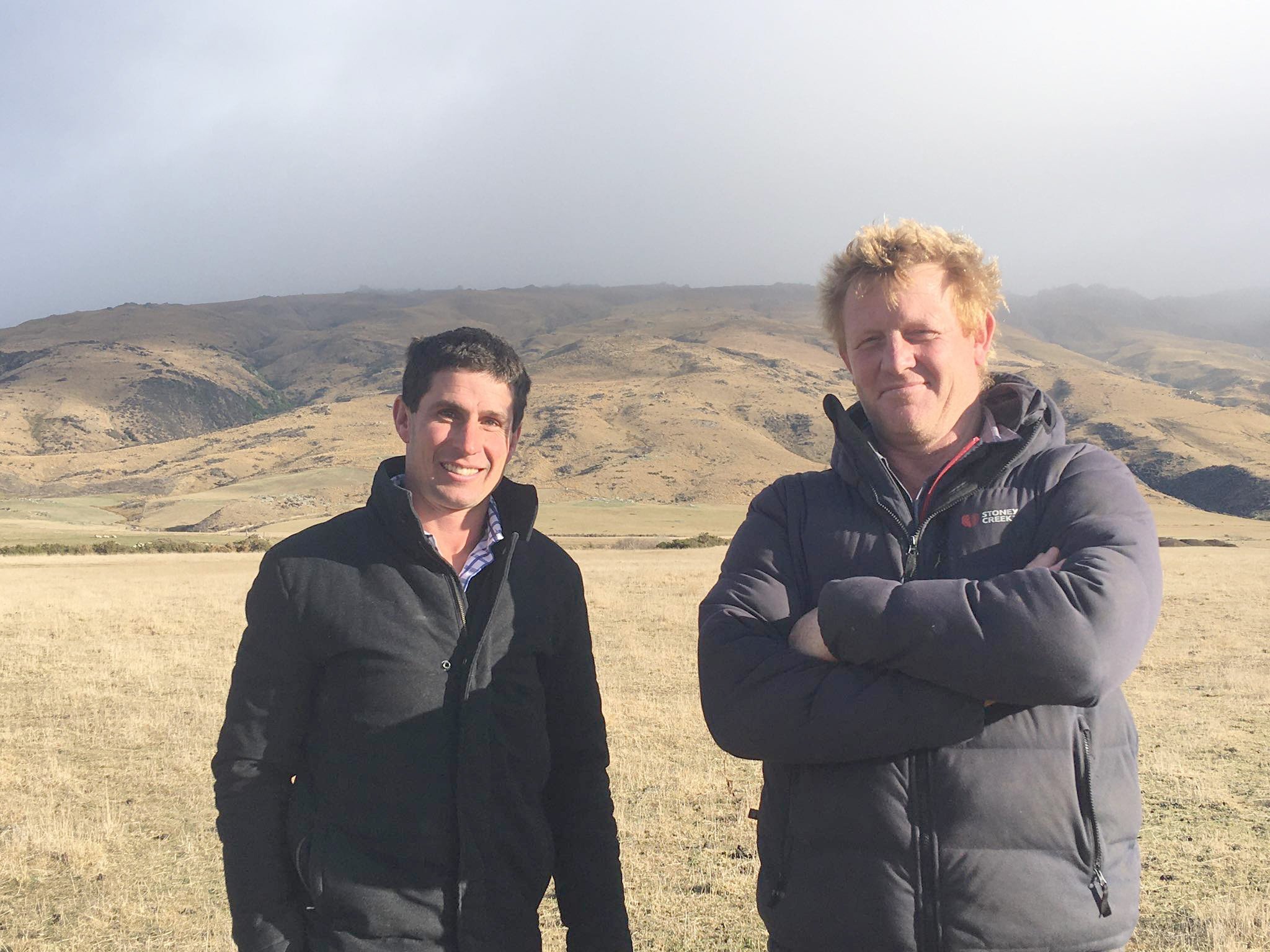 Strath Taieri Irrigation Company directors Bevan Wilson (left) and Ben Graham are excited about the opportunities that water will provide to the area. PHOTO: SALLY RAE
Strath Taieri is a traditional farming district, best known for sheep and beef cattle. But an irrigation proposal being mooted has the potential to see it diversify into other areas, including horticulture. Business and rural editor Sally Rae reports.

It is a project that has been talked about for decades but which, in recent times, has gained momentum, with an application for funding made to the Government’s Provincial Growth Fund. Without reliable water, the future for the district would be bleak, STIC said.

And by bringing more irrigation water to the area and ensuring certainty of supply, there was potential for diversification of the traditional sheep and beef farming area into the likes of horticulture, as well as increasing productivity within existing farming operations.

The cost of the project has been estimated at between $10 million and $15 million, depending on the final design and the amount of new infrastructure required.

The project involved raising the Loganburn dam — on the remote southern end of the Rock and Pillar Range — by 0.7m to increase water storage capacity and physically divert high flows from two headwater streams of the Sutton Stream into the Loganburn reservoir.

That stored water would be released at times of low river flows for more reliable irrigation in summer and autumn, would add generation capacity for the existing Trustpower generation assets (7.3% more power from the power stations at Paerau and Patearoa) and ensure about 70km of the Taieri River had higher flows than the current environmental flows.

For farmers, it would increase the reliability of the current 1500ha of irrigation operations and enable the expansion of irrigated areas by about 2000ha.

Farmer and Otago regional councillor Kate Wilson said the scheme was first looked at in 1975 but did not progress. Then the area was hit by severe drought in 1999 and the farming community ‘‘started looking at absolutely everything’’.

Describing it as a ‘‘game changer’’, Mrs Wilson said there were many ‘‘pluses’’ to the project, including environmental benefits through the increased flow, the increased power generation and job creation, and she also expected there would be ‘‘community good’’.

While sheep and beef farming could continue with surety of supply, it could lead to other opportunities such as horticulture. ‘‘There’s a whole lot of good things we could grow here,’’ she said.

The Loganburn reservoir on the southern end of the Rock and Pillar Range. PHOTO: GERARD O’BRIEN
Lone Star Farms, which owns The Wandle, a 2650ha farming operation on the outskirts of Middlemarch, was doing early stage investigations of what horticulture and annual crops could potentially be grown on its land.

General manager Boyd Macdonald, who stressed it was ‘‘really, really early days’’, said water would provide an opportunity for such diversification, if it was possible, and jobs could potentially be created if it became a reality.

To date, funding from the Ministry for Primary Industries’ Irrigation Acceleration Fund had been used to determine the viability of the project from technical, financial and resource management planning perspectives.

Considerable design and costing work had been completed and all risks and issues identified. The group was now ready to advance the project through the next stage.

The Maniototo Irrigation Company, which owned the Loganburn dam, and which co-owned the existing delivery infrastructure with Trustpower, was supportive of the project. About 25 current STIC shareholders had committed to the project and some farmers already had on-farm infrastructure for it.

Two primary water take permits for primary flow abstractions had already been secured and issued by the Otago Regional Council.

Resource consents for raising the dam wall, the race diversions and headworks, and supplementary water permits were all required before the project would be ready for investment.

The dam was completed in 1983, the last Ministry of Works project before the Clyde Dam, and it had been raised twice.

STIC chairman Bevan Wilson said the company had done research as to whether it could meet environmental restrictions and that was ‘‘all good’’.

Dairy farming would be a ‘‘no go’’, built into shareholder agreements, along with certain wintering conditions in certain soils.

‘‘There’s no point getting the water here, putting it on and buggering our valley environmentally,’’ he said.

It was almost like irrigation was the ‘‘by-product’’ of the project, coming out ‘‘at the bottom’’ while everyone else got the benefit from it. There was no single winner from it, it had a multiplying effect, he said.

‘‘It is important to look after the creeks and streams but it comes at a cost to irrigators’ business. The increased availability of high flow water through storage and delivery around the Taieri River could go part way in replacing this loss,’’ she said.

About 45% of the land in New Zealand was used for farming, meaning just over 6% of farm land was irrigated.

About 14.5% of New Zealand’s total land area was classified as land class 1-3, a rough proxy for land most suited to irrigation, indicating there was potential to apply water to much more land than was currently irrigated.

Water shortages were beginning to occur across the globe which would limit some countries’ ability to feed their growing populations.

New Zealand was lucky to have plenty of water available — it just did not always have water in the right places at the right times, the report said.

Investing in irrigation could help mitigate the risks associated with both short-term weather events and longer term changes in climatic conditions.

New Zealand was not short of water, unlike most countries in the world. But it was short of infrastructure in which to store water so the resource could be accessed where and when it was needed.

On a per capita basis, New Zealand had 72,510m3 of renewable freshwater available, compared to the world average of just 5208m3.

It had considerably more water available than most other major food-producing regions, including the United States, Australia and most parts of Europe and Asia.

Many other countries were using a much greater proportion of their available water for irrigation than New Zealand. In some cases the rate of use was unsustainable, the report said.

Producing more with less was becoming increasingly important as the agricultural sector faced limits and costs associated with greenhouse gas and nutrient emissions.

Water and nutrients were increasingly being applied in a more precise manner based on soil data readings and/or sophisticated modelling.

The need to place water more efficiently on to the land, and in a more automated way, was reflected in the move away from flood irrigation to centre-pivot irrigators.

Irrigation had a role to play in enabling alternative land uses. The ability to apply water when required meant land could sustain a wider range of enterprises, particularly more intense arable and horticulture uses.

Without access to water, it would be too risky to invest in a number of those higher value crops. Some crops did not require a large quantity of water, relative to pastures, but they did require water at strategic times.

New Zealand had an opportunity to continue to grow its role as a reliable supplier of high-quality, ethically produced food.

Used appropriately, irrigation could enable a wider range of crops to be grown, improve animal welfare, and reduce greenhouse gas and nutrient emissions.

So ... We spend the past two decades subdividing and putting houses on some of the best and the most fertile food land in NZ (Mosgiel and Outram). So that perfect agricultural and horticultural land is taken from future generations for private subdivisions and private profit.

And we keep subdividing that perfect land ... And now we start irrigating land not made for the purpose. When water is becoming another scarce resource.

Where is the food security vision? Why are private groups allowed to keep profiting and smothering areas via subdivision that are truly the food bowls of Otago? Private profit, public loss - now and in future generations.

We're glimpsing now with COVID what scientists and environmentally savvy people have warned for decades: It is essential to preserve lands that could **feed** us, not put houses on that land for private short-term profit, because international food trade may not be secure in the future.