The flagship of Oamaru’s Victorian precinct has reopened its doors.

New lessees Herbert and Marise Martin opened the Criterion Hotel yesterday, to a bunch of punters decked out in Victorian-era attire.

The 1887 establishment, owned by the Oamaru Whitestone Civic Trust, has been closed for the past year, and its relaunch was the culmination of consideration and sensitive action to return the building to the community, Mrs Martin said.

"We love this place, and it made us very sad indeed to see the doors shut for such a long time."

It captured both of their loves, hospitality and heritage, and they created a traditional English-style menu, with the help of North Otago businesses.

"It’s absolutely perfect what we’ve been able to bring together. 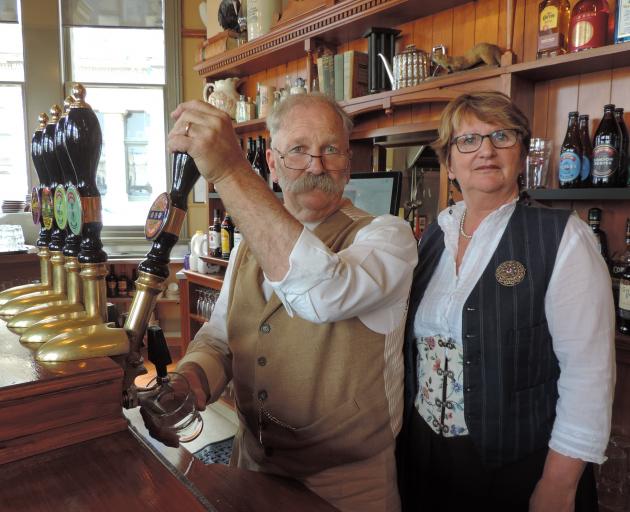 Criterion Hotel new lessees Herbert and Marise Martin reopened the establishment in Oamaru yesterday. PHOTO: KAYLA HODGE
"We are absolutely delighted to serve the people of Oamaru and beyond."

The couple and the trust spent hours working to return the bar, restaurant, and six bedrooms to their roots.

"We listened to what the building told us, and that was to be restored to kind of the way she would have been in 1887 ... it’s an extraordinarily beautiful building when you view it from the street, and it could not be anything other than traditional — to be anything other would be plain wrong."

"This is the flagship. It welcomes people to the Harbour precinct — it’s 30 years of the trust, too. This is a big moment."

It had been a tough few years for the hotel, but he was confident the trust found the right people to take over the lease.

"They’ve done some amazing stuff. The trust wishes Herbert and Marise all the very best for their success."

Hope they have pickled eggs ;)