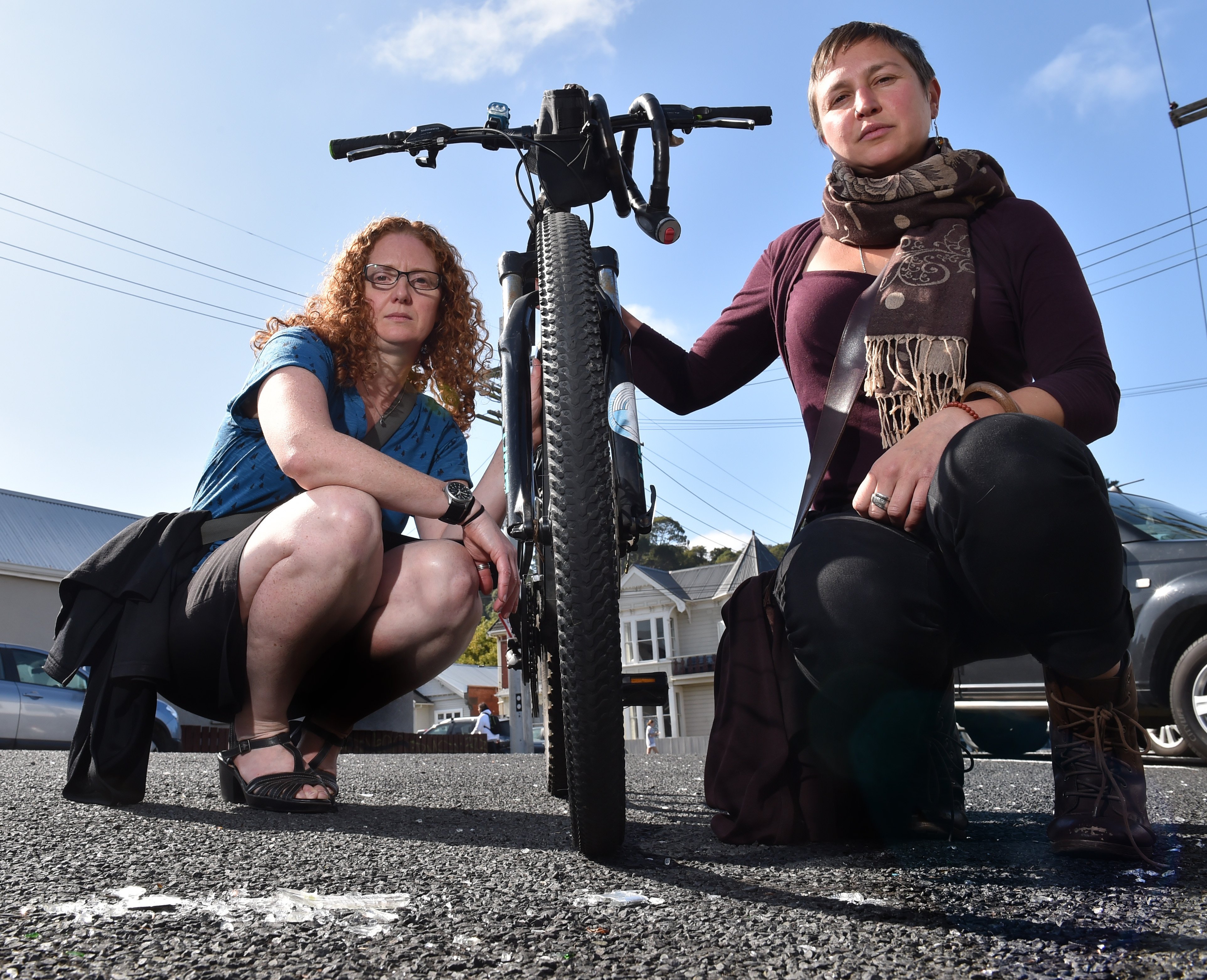 Kimberly Smith (left) and Kitty Cresswell-Riol say Dunedin streets should be safe for cyclists. Photo: Gerard O'Brien.
Cycling advocates say a culture of littering Dunedin streets with smashed glass should not be tolerated.

The Spokes group is running a social media campaign about broken glass, is urging people to lodge complaints with the Dunedin City Council and is keeping a record of complaints itself.

Cyclists were already looking out for pedestrians and vehicles, and glass was an additional hazard, she said.

The problem was more than a nuisance. It was a public health issue, she said. 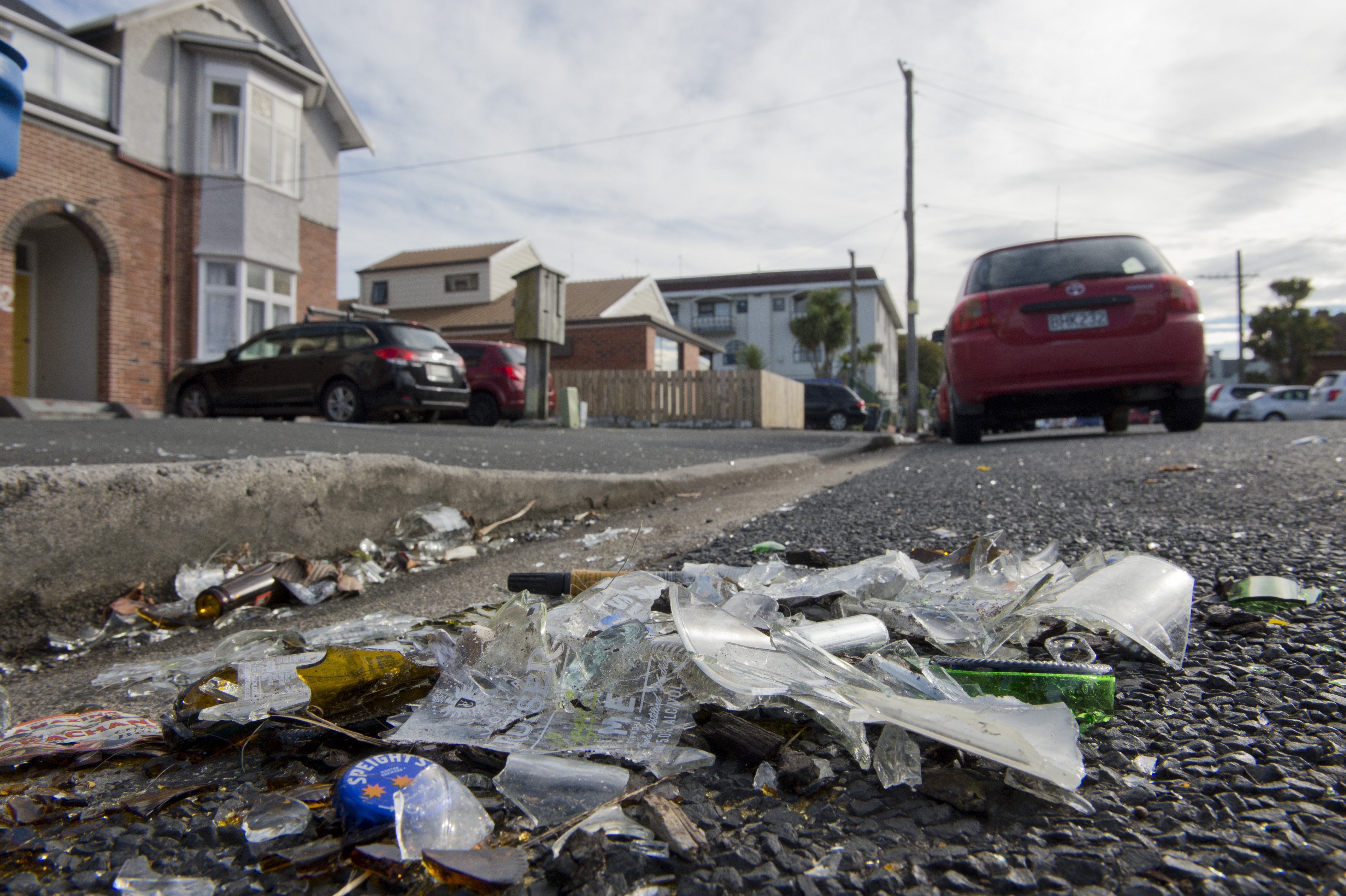 "There is still a lot of broken glass covering key footpaths I use to get to and from work and there have been a number of times it has been unsafe to cycle in the bike lanes due to excessive amounts of broken glass," she said.

"The behaviour of certain groups of individuals does not seem to have changed and, in fact, breaking glass seems to have become more of a specific activity, with some sections of roads or footpaths seemingly being used as ‘targets' for glass bottle throwing."

Ms Cresswell-Riol said she supported a national beverage container return scheme, as this could provide an incentive for doing the right thing.

The Dunedin City Council is reviewing its litter compliance policy and has asked for feedback by next Tuesday.

One amendment is council staff would be able to issue written notices telling residents who have rubbish on their property to clean up, remove or cover it.

Enforcement options for the council for littering include infringement notices and prosecution.

"Spokeschairwoman Kitty Cresswell-Riol said smashing glass on footpaths and cycle lanes was antisocial and dangerous" we built the b***** cycle lanes (at great cost) for them so what else do they want? if they have a problem, then why don't they get in there and clean up instead of moaning that others don't clean up for them.

Whats wrong with not wanting broken glass on cycle ways?

Which cyclists look out for pedestrians? Only a very small number...

As a taxi driver, it is not uncommon for us to request passengers to come out of the worst offending streets such as Castle to be picked up. Castle St cost me an almost new tyre one night, with a smashed bottle slicing through the side wall of my tyre. New tyre plus time off the road not working is a significant cost.

The tossing of glass is a mindless, selfish and dangerous thing. Students should face the wrath of the Otago University proctor and the full weight of the law.

The 'glass and a half' has apparently moved to the roadways now that Cadbury has left.

Cyclists have every right to be angry about this, as do the rest of us. I know of dog and cat owners who have had to take their pets to the vet to have glass removed from paws. It is long overdue people were held accountable, but forget the University, and the proctor.
When students are living in rentals, or halls, in public streets, and it is the public streets being littered with broken glass, it is the council and police who should be involved. It is alarming to think the University feels it has the right to exercise discretion when students break the law. It reeks of privilege, protectionism and overstepping their role.
Is there a by-law for littering? Perhaps we need a specific one for broken glass, given the added dangers and prevalent nature? Set a fine, and/or consequence like Community Service, police it and take a hard-line approach. Education is not the answer here, as I doubt any of these offenders is unaware that what they are doing is wrong.