By Hamish MacLean
3 Comments
Humans and New Zealand sea lions should be able to share the beach, those familiar with the threatened species say.

But a dramatic exchange between a bodyboarder and a juvenile sea lion at a Dunedin beach this week has sparked discussion about human interactions with the animals.

An unidentified bodyboarder was recorded swinging his board at a young sea lion in a video taken at the St Clair sea wall that has now been viewed thousands of times around New Zealand.

Department of Conservation biodiversity ranger Jim Fyfe described the actions of the man as showing a lack of education about appropriate behaviour towards the playful and inquisitive juveniles of the species.

Yet several readers yesterday contacted the Otago Daily Times to say what was missing from the report was consideration that it was an "extremely aggressive" animal.

One, Jenny Chamberlain, said she did not know the man in the video, but witnessed the incident, and spoke to him afterwards to make sure he was all right.

"I suspect he was shaken by the encounter but with a determined, aggressive, biting sea lion harassing him, I think his actions were instinctive and understandable."

New Zealand Sea Lion Trust chairwoman Jordana Whyte said while some of the anecdotal reports of sea lions engaging with humans could sound concerning at first, "we only get the human side of the story".

"We don’t get to hear the sea lion side of the story," she said.

"Usually, when you start digging in you can start to suss out where the miscommunication was between the parties.

"In the last six or so years that I’ve been involved with sea lion advocacy there’s been, I think, a broader understanding of sea lions: that they are special, and that with just a little bit of consideration and analysis of the situation you can de-escalate things very quickly." 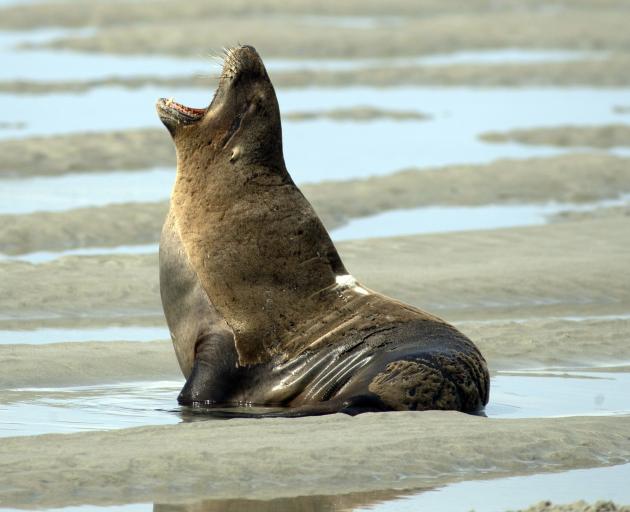 A large male New Zealand sea lion yawns from his paddling pool at Taieri Mouth this week. Human interactions with the species have again become a flashpoint after a video emerged of a bodyboarder taking a swing at a juvenile at a popular Dunedin beach. PHOTO: GERARD O’BRIEN

He had photographed both of the sea lions in the water.

In his experience adult sea lions typically would "buzz off" around humans but animals between the ages of 1 and 3 were very interested in people.

The ones making themselves known to beachgoers these days were the perfect age to want to have fun, and some of the biggest playthings they had in the water were surfers and swimmers.

The wild animals loved to interact with people, but people would misinterpret that.

"It’s not aggression: it’s behaviour similar to a dog wanting you to play with it," Mr Morrison said.

His children, aged 12, 14 and 16, had also all spent hours in the water alongside the animals.

My kids get a real buzz out of it.

What people often described as a "bite" was actually a sea lion "mouthing" a person, he said.

"It’s not very comfortable, but it’s not like it feels like it’s life-threatening. It just is intimidating because you’ve got a wild animal having a little grab of your elbow, or your hip."

The best advice was to stay calm, not to look sea lions in the eye, not to run away "or scream and paddle away from them, which I see adult surfers doing all the time", Mr Morrison said.

"You just have to stay calm and let them do what they need to do; they’ll just want to play a little bit, they’ll get bored eventually and move on to someone else, or they’ll go down and start looking for fish, or playing in the waves and start surfing."

I was down there yesterday evening and two large males came in and went up into the sand dunes. Once they lay down in the tall grasses you can't see them. Is this the next issues that DoC will blame on people when it's just a part if the world we live in?
The guy was defending himself, he could not turn and run as he had flippers on and risked falling over and being bitten.
The DoC ranger is very experienced but not everyone is. He mentions sea lions in the water but they are a lot more aggressive on the land as they haven't got the ability to get away fast.
So DoC needs to educate all beach goers on how to handle being confronted by a sea loin and other sea creatures at DoC's cost or accept that this is just part of the natural world we live in.
This is just more typical DoC lala land and not practical or helpful at all..

It's not hard to educate oneself on such matters if you want to swim or surf at this time of the year when the sea lions are prevalent. I walk the beach pretty much every day and have stumbled across them many times without incident. What nonsense to find fault here with DOC who are merely trying to get people to understand how better to interact with these creatures and avoid unnecessary stress for both animals and humans alike. Unlike yourself, I found the information provided both practical and helpful, and it is a joy to share our local beaches with these amusing, curious creatures.