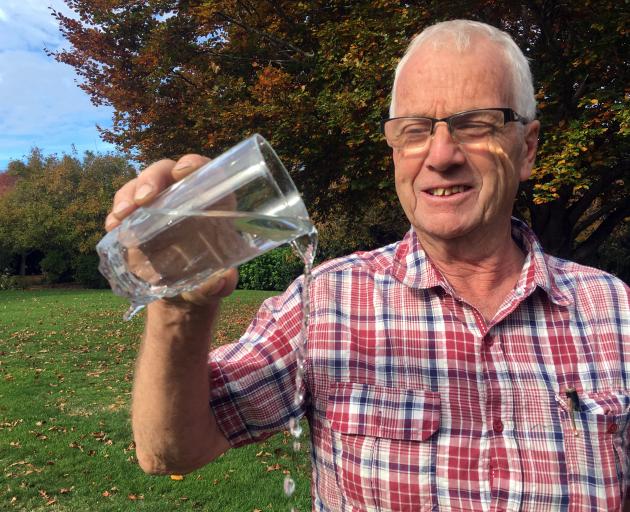 From the meeting, a working group was formed to lobby the Dunedin City Council to suspend fluoridating the water supply until it could be proven safe.

"We are concerned by a lack of evidence.''

The debate about the effects of fluoride had to be widened beyond claims it reduced tooth decay, he said.

"No-one is talking about the issues including how it makes your bones brittle.''

The council should stop forcing people to consume fluoride.

"They are mass-medicating us for the benefit of a small portion of the population who don't brush their teeth,'' he said.

A community meeting in Mosgiel about eight years ago stopped the council introducing fluoride to the town's bore water supply, Mr Enright said.

However, when Mosgiel was switched to town water supply from the Mount Grand treatment plant last year, residents were exposed to fluoride.

At the Mosgiel-Taieri Community Board meeting in Coronation Hall yesterday, Dunedin City Council 3 Waters manager Tom Dyer gave an update on the feasibility of returning Mosgiel to treated bore water without fluoridation.

If Mosgiel was returned to bore water, it would need to be chlorinated to stop water being infected from bacteria, he said.

To build a new treatment plant would cost up to $16million.

"At this stage that's not a programme of work we are suggesting we should be progressing.''

On the subject of fluoridation, the council did what the Ministry of Health recommends, he told board members.

In an email to the Taieri Times last week, Mr Dyer said the ministry recommends drinking water to contain fluoride at between 0.7 and 1.0 parts per million, which was safe for consumption.

The town supply had fluoridated at the lower end of the recommended range for many years, he said.

At yesterday's meeting, he said new legislation could be introduced giving health boards the power to mandate fluoridation.

Community board chairwoman Sarah Nitis said as the decision on fluoridation could be given to health boards, the community board would stop asking the council to investigate returning Mosgiel to unfluoridated bore water as it could be "a waste of ratepayer money'' if the legislation was introduced.

I suppose complaining about fluoridated water gives these people something to do.
“... until it is proven safe ...”? Nothing is safe in sufficient quantity, including pure water.
Fluoride is safe in the form and quantities used in domestic potable water.
Go and make yourselves useful in a cause that actually matters, there are plenty of those, and leave the loony causes to others.
To the Council: give this group, and other nutters, the respect they deserve.

These anti-flouride groups just keep cropping up and persist in spreading myths, scaring people, and, through their efforts, putting peoples oral health at risk. Fluoride is not a medication, It is a mineral, and when present at the right level, fluoride in drinking water has two beneficial effects: preventing tooth decay and contributing to healthy bones (but they trot out the good old 'brittle bone' scare again!).
It a nutrient found naturally in some areas but deficient in others.

There are several examples of how everyday products are fortified to enhance health, such as iodine added to salt, folic acid added to breads and cereals and Vitamin D added to milk.

These groups are organised by the same kind of people who are still pushing the (long since debunked) MMR scare - an ill-informed minority.
I hope to see a comment by the health authorities and the dental council, if they are interested in doing their work to counter this groups baseless claims.

"There's an interesting report out from the Food Safety Authority of Ireland. It is a very comprehensive look at Irish dietary fluoride consumption, particularly as we have a high rate of tea consumption.

The final conclusion is:

"Based on the results of this study, the FSAI Scientific Committee concluded that there is currently no
scientific basis for concerns about the safety of children and adults in Ireland from exposure to fluoride
from foods and beverages."

The Water fluoridation: health monitoring report for England 2018 states
Five-year-olds in areas with water fluoridation schemes were much less likely to experience tooth decay, and less likely to experience more severe decay than in areas without schemes.
• The chances of having a tooth/teeth removed in hospital because of decay were also much lower in areas with water fluoridation schemes.
• Children from both affluent and deprived areas benefitted from fluoridation, but children from relatively deprived areas benefitted the most.
There is no convincing evidence of higher rates of hip fracture, Down’s syndrome, kidney stones, bladder cancer, or osteosarcoma (a cancer of the bone) due to fluorida

It amazes me that there are still people in New Zealand who are living in the dark ages when it comes to the addition of fluoride to their local water supply. The claim that this chemical should not be added to their drinking water 'untill it is proven to be safe' is rubbish. Flouride has been added to Aucklands water supply for the last forty years. As far as I am aware there have been no mass poisoning or deaths in that city as a result. What I can say is that my children who are now in their forties and were raised in Auckland have no idea what it is like to suffer tooth decay. In contrast, my generation who were raised before fluoride was added to Auckland water know what it is like to suffer from tooth decay from the age of twelve. Not to mention the cost of looking after my teeth over the last sixty years and having to suffer the pain and cost of root fillings and teeth being extracted. I am sorry. The facts speak for themselves.