Mike O’Kane has for several years explored the use of computer software to combine images at different scales, primarily using kitset models and placing them in real world scenes in ways which question our perception of reality and scale.

In his latest exhibition, O’Kane’s tactics have remained largely the same, but his subjects and use of materials has developed and changed. World events such as the invasion of Ukraine have caused the artist to re-evaluate his use of model soldiers in his scenes. In "Changing Circumstances" he has subverted the standard provocative images of violence which might be expected to accompany such models, instead placing them in more gentle, pastoral scenes.

In pieces such as Extended Stay, human presence is reduced to an "off camera" moment, represented only by smoke rising from a chimney. In Portrait of the Artist, O’Kane presents himself, or a plastic analogy of himself, in a geometrical array which almost suggests a memorial.

Perhaps the most enigmatic image is the group portrait Dardanelles Two-Step, with its miniature soldiers presented against a vague painted shore and engaged in arcane dances and interactions.

The image becomes a celebration of the models themselves yet also hints at an elusive deeper meaning. 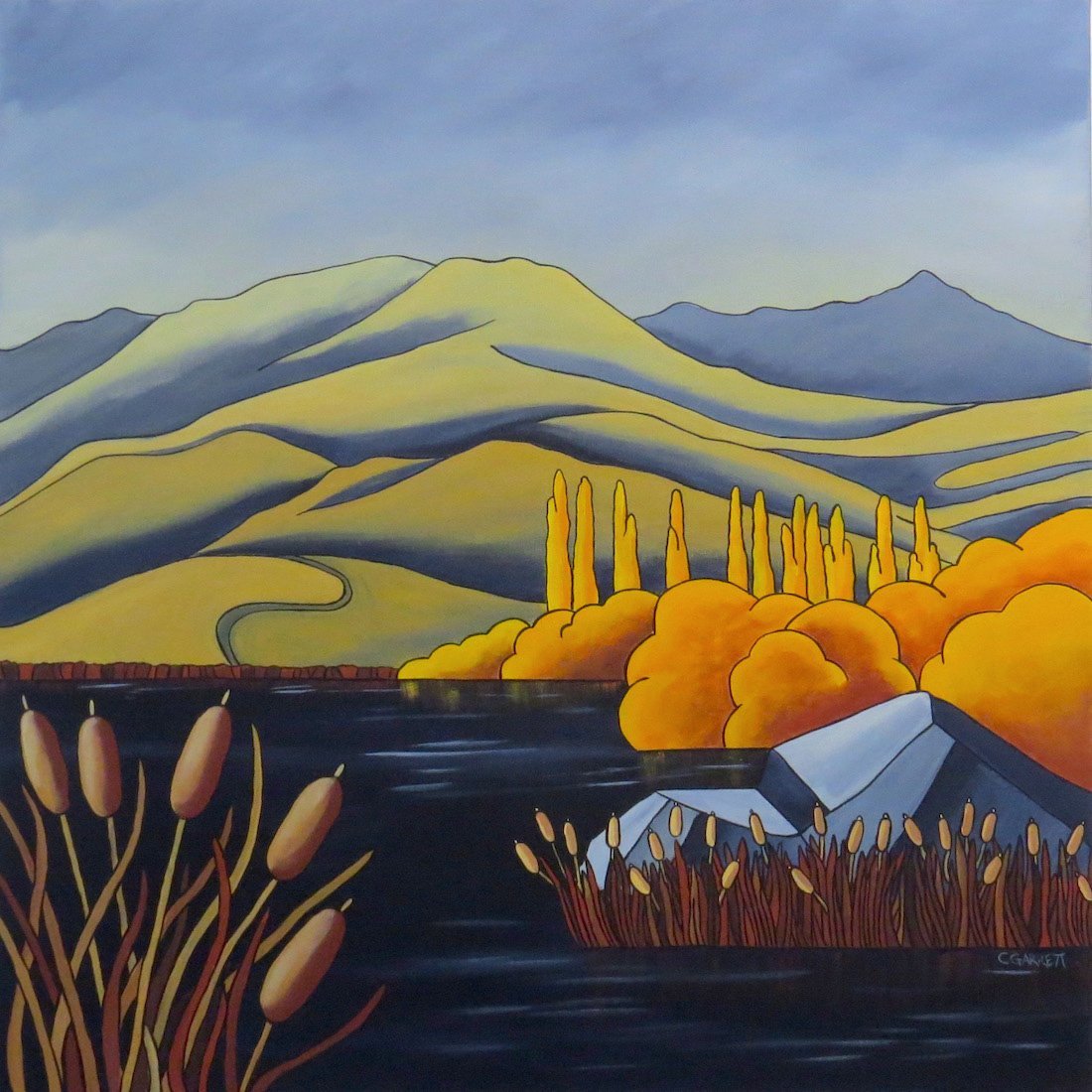 Catherine Garrett’s latest exhibition at The Artist’s Room displays a growth and maturity to her style.

Previous exhibitions have comprised stained glass-like paintings, with solid or subtly shaded colours broken by strong black delineations. The artist’s favoured subjects, the empty landscapes of Central Otago, and especially the rich colours of Butchers Dam, have remained, but in the latest display the works exhibit an advancement in style. The coloured areas have become more nuanced and the black lines have reduced to thin borders (in the artist’s words, she "bought a thinner brush"). In several of the works, the black now acts simply as an edge to the graduated colours of the hills, rather than as sharp borders separating planes of colour.

More complex forms such as bulrushes, sunflowers, and toetoe now dot the works, adding a distinct foreground and framing effect. The artist’s compositional skills (most apparent in works such as Butchers Dam and Taieri Gorge) have added a stronger perspective to many of the pieces.

Garrett has focused largely on autumnal scenes, the rich earthy colours enhancing many of the works. The paintings effectively capture the evocative nature of the stark yet welcoming landscape of the region’s interior. 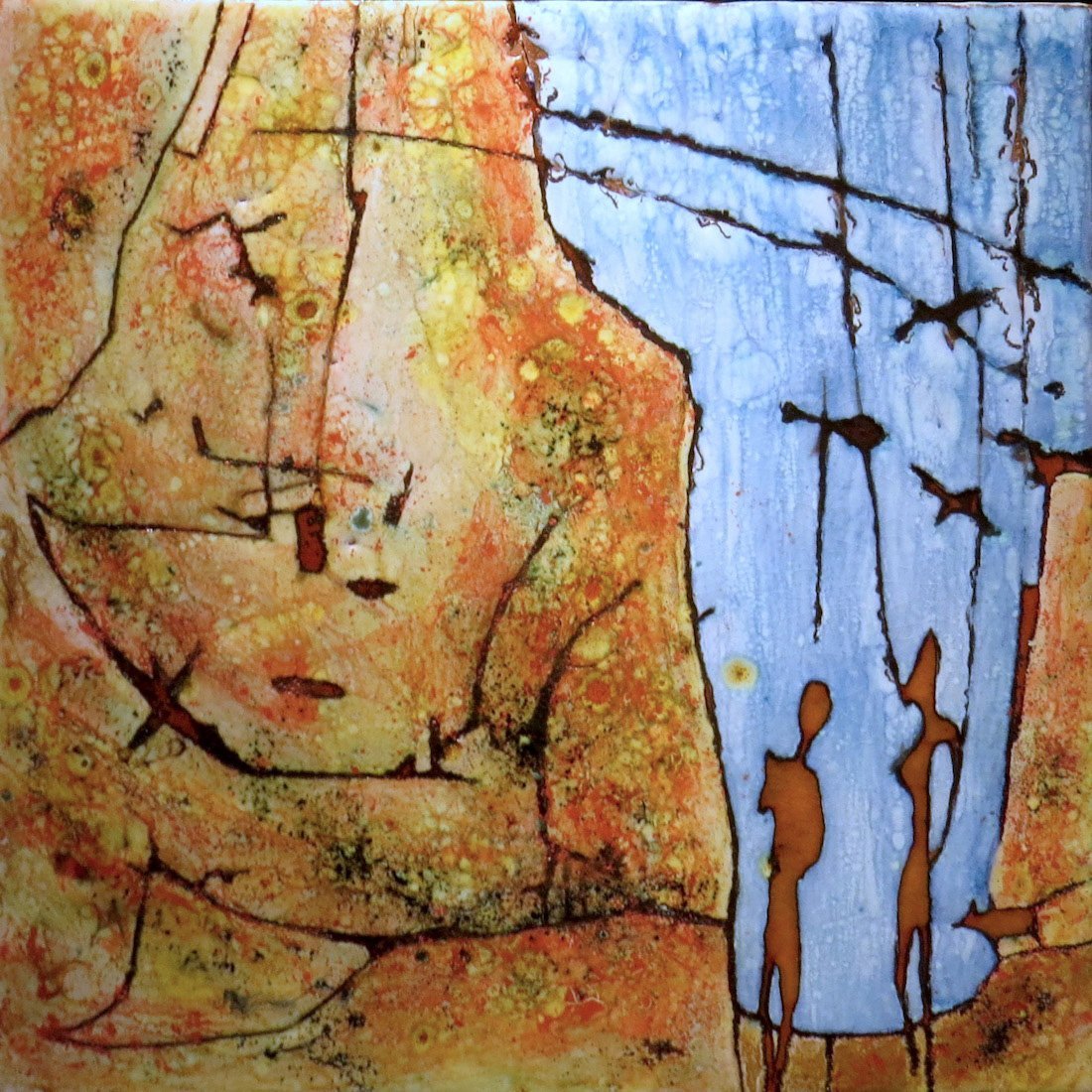 Gennie de Lange is one of New Zealand’s premier ceramic artists, working in a distinct style which involves painting in glaze, using multiple layers to build up scenes on ceramic tiles.

To commemorate the artist’s return to her art after a gap of several years, Gallery Fe29 is presenting a retrospective covering works spanning half a century of De Lange’s career.

The artist’s images have covered a variety of subjects and styles, ranging from the zen-like simplicity of the early work Canterbury Sun through to the angular expressionism of Shattered Buildings, Shattered Lives 2, and the Toulouse-Lautrec-like hedonism of There’s a Chance We’ll All Dance Together Again One Day.

In several pieces, such as the two "Summer Series" images, representationalism almost disappears, replaced by studies of line and shape in rich primary hues.

These works show a clear debt to the primitivist movement of artists such as Matisse and the tribal antecedents upon which they drew inspiration.

More intriguing, however, is the distinct sense of a hidden narrative in many of these paintings, which adds to the attraction of these riveting pieces.