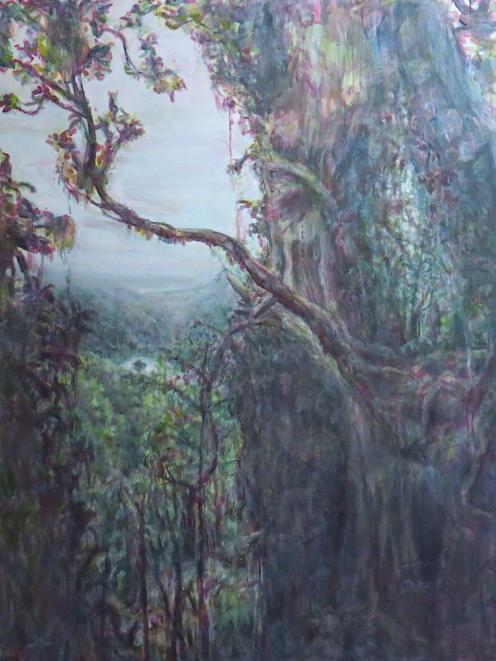 It's been a while since we've had the pleasure of seeing an Anya Sinclair exhibition. She has returned with a fine display at Olga, which has much of the feel of her former work, but with an intriguing twist.

Sinclair's images still focus on the forested wilderness, rivulets of blue-green paint emphasising the humidity of the bush. Hints of rusted, sanguine red also permeate her scenes, suggesting simultaneously decay and life, and indicative of the delicate ecological balance of the world's lungs.

Against this living, sombre palette, the artist sets her theme, that of the tragedy of the commons - the idea that when faced with the choice between the good of all, or a larger personal gain to the detriment of the community, far too many people will pick the latter.

The slow deterioration of the environment is just such a situation. Sinclair combines these thoughts with the use of the commons in the more modern sense of the easy online accessibility of images, whether they be copyrighted or not.

Sinclair's images in the current exhibition feature subtle variations on a handful of such internet-accessed landscapes, allowing us the ability to compare the subtle differences between the images as we contemplate the fate of our current concepts of ownership and environment. 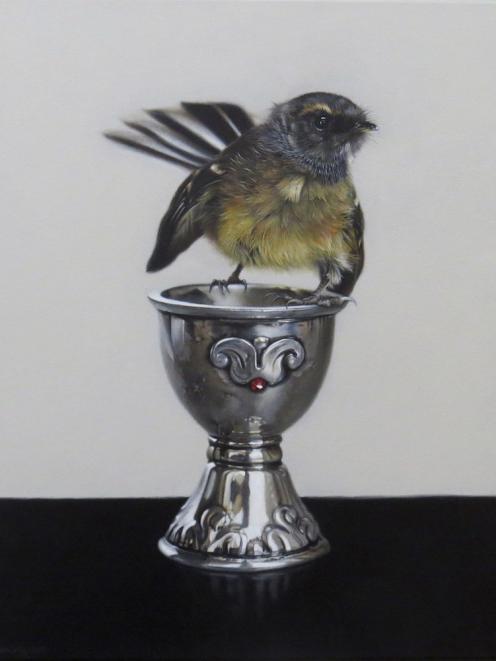 Jane Crisp is celebrating a spiritual renaissance from a series of personal experiences which left her, in her own words, ''in the abyss where death and rebirth occur.''

Drawing on Carl Jung's theory linking the human subconscious with mystic archetypes, the artist has questioned her essence and the nature of existence, and in doing so has stepped outside our normal participant nature to observe the world as if from the outside and has produced a series of works inspired by various muses and sacred symbols, from Leonardo and the tui to platonic solids and Buddhist symbols of enlightenment.

As a result, her work, while retaining its nature of meticulous, precise bird studies, has gained an innate spiritual power. Crisp's exploration of her sense of being has focused her image-making.

The birds retain their stature and (hardest of all feats with bird studies) their inner light and life, but this is now coupled with a darker, more serious mood. Whimsy has left the room, replaced by a sense of spiritual grandeur.

The negative space which has often surrounded her subjects now imbues the images with something which seems to transcend known dimensions - especially in works such as Rise and Observe - and is brought to full focus in the stormy clouds of Passing. 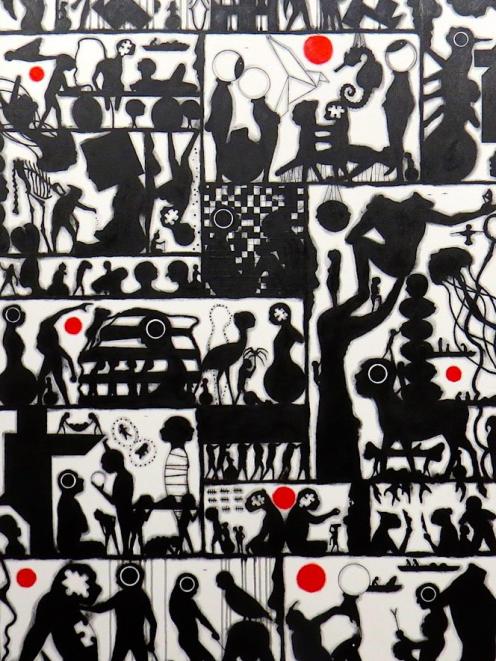 Andy Leleisi’uao returns with a further series of his arcane Pasifika hieroglyphics, teasing and provoking with seemingly facile yet ungraspable narratives.

Each canvas is divided into panels, the sum of which appear to tell a coherent story. The tale, however, is relayed in a language which seems to defy the viewer's attempts to decipher it. Are the works a journal of observations in the un-land of the Uslands, or are they a series of instructions for ritual?

Pared back to black and white, with the occasional presence of a ghostly orange sun, we are left with shadows and silhouettes from which to conduct our inquiries. The works are stark, yet the borders between black and white are blurred, as if to imbue the characters with energy and life.

The enigmas draw the gaze again and again. We seem to be forever on the edge of discovering what is going on, needing only some Rosetta Stone to unlock the door of understanding. There is distinct reference to the puzzle in the jigsaw, crossword, and tangram pieces within the designs.

The artist talks of feeling ''privileged to view this other world'', as if he doesn't have all the answers to these questions himself. Whatever the meaning, these fascinating cryptic images are pleasing and memorable works of art.