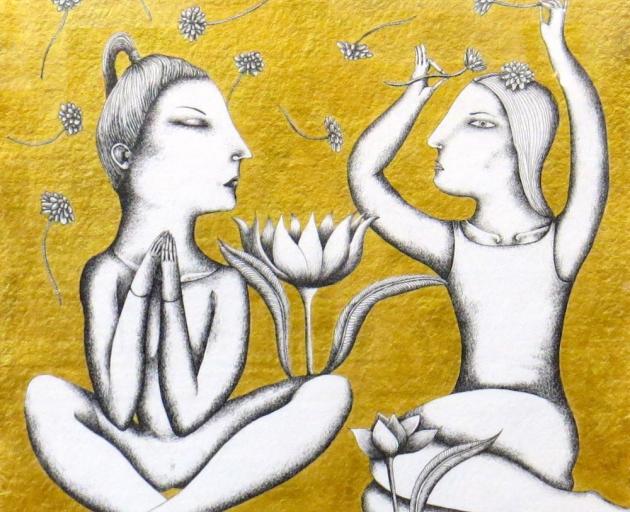 Sue Syme's large-headed caricatures of individuals and small groups going about their often arcane daily life are a primary focus of her current exhibition in Port Chalmers.

Syme's works show her history of pen and watercolour images and lithographs. Although her oeuvre now also includes oils, the strong outlines and solid washes of colour remain.

The depicted scenes are enigmatic, the viewer being left to ponder the nature of the protagonists' activities.

The distorted, cartoon-like forms enhance this feeling, whether the images have the dreamlike quality of Toorop or the dark, cynical humour of Grosz, two artists to whom Syme's images bear superficial similarities.

The one work which does not feature figures is a delightful study of odd, unnatural flowers, which seems to have escaped from a Victorian botanical study.

The works predominantly place Syme's figures against solid pastel backdrops, as if the characters are arrayed on stage. The only hint of a real world setting is found in the moody sky of Three in Black.

The works reach their culmination in the large oil My World in Blue, which is almost the only work to suggest realistic colours, albeit from an uncanny distance. The figures are delicately shaded in tones which are close to natural but somehow jarringly and deliberately off-kilter. 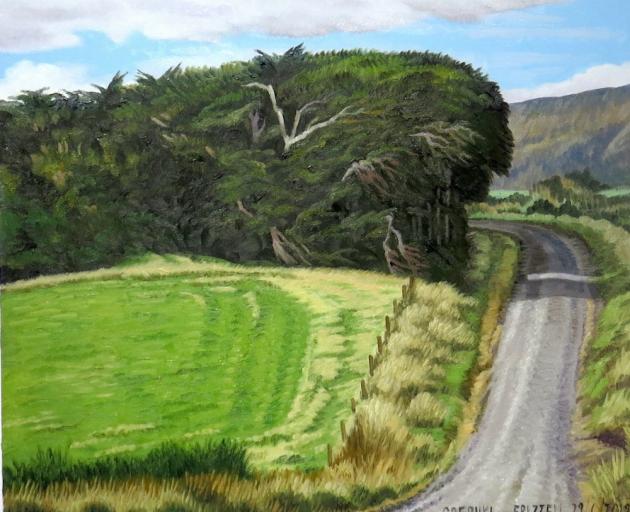 Dick Frizzell is probably best known for his often iconoclastic art using advertising and media figures. There is, however, a second string to his bow, his impressive and evocative New Zealand landscapes. It is these works which feature in ''Out of Alex''.

The images, inspired by Frizzell's time as artist-in-residence in Alexandra, explore the nature of the southern landscape. Working in both small framed images and wide cinemascope panorama, the artist examines not so much the grandeur of the vista (though this is evident in many of the works), but rather its comparison with the usually detrimental dents which humans have made to it.

A first glance at Mt St Bathans from St Bathans Downs Road, for example, presents a sliver of road winding into seemingly endless hills, but a closer inspection reveals the damage to the vegetation caused by introduced species.

The real strength to the paintings is the way in which we feel compelled to wander into the landscapes, to travel the winding road into Wakatipu Basin and see what lies beyond the macrocarpas of Orepuki.

We find ourselves mentally continuing along the Pigroot, prepared to find out what is waiting beyond the next rise. It is the creation of this impulse by the artist which makes the works so effective. 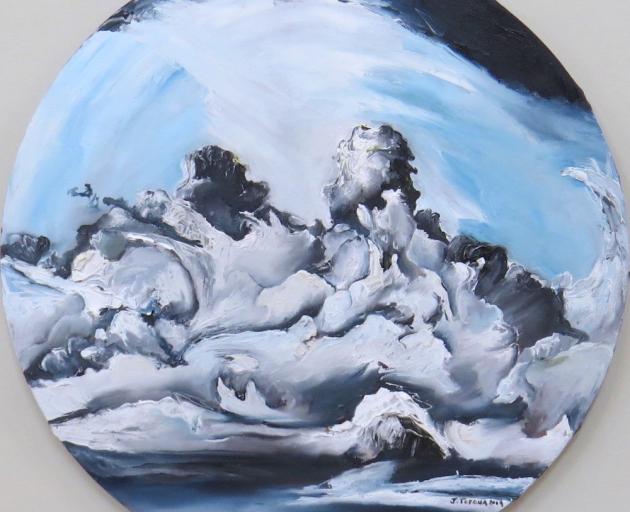 Joanna Tokona's latest exhibition focuses on Rangi Matahauariki, that is, the often quickly moving layers of cloud close to the horizon.

Because of the ever-changing nature of the sky, this subject has the potential for an infinite series of fleeting glimpses. The term rangi matahauariki is occasionally used as a metaphor for the approach of new life prospects and goals, and in Tokona's images we see skies that are possible portents of both fine or stormy futures.

The artist admits to being in awe of the sight of clouds forming, merging, and building into towering forms.

Tokona has used a circular format for many of the works, suggesting that while the images are generally small, they are part of an unbounded sky. More usual rectangular images would give the impression of seeing the entire picture; Tokona's paintings are clearly only a section of larger view.

The artist makes bold use of impasto, giving a solid force to clouds presented against the flatness of a blue sky. In works such as the two Makorori images, sea, land, and cloud have a similar solidity, the lines between them blurring to the point of abstraction.

Elsewhere, as in the crepuscular sky of The Chase, colour is well used to suggest the magic of the sky.