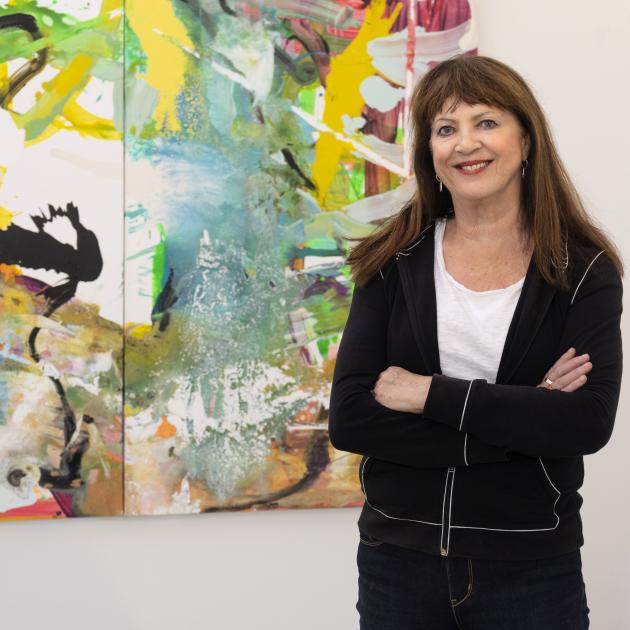 Philippa Blair is exhibiting a range of work from the past 30 years in Dunedin.
It has been about 30 years since Philippa Blair exhibited her work in Dunedin and she had been looking forward to revisiting the city of her forebears until the latest Covid- 19 outbreak. From her bubble in Auckland she talks to  Rebecca Fox about her much anticipated return to the South.

It is thanks to Dunedin sculptor the late Peter Nicholls that Philippa Blair’s work has returned to the South.

While she never met Nicholls they carried on a ‘‘good correspondence’’ and had a mutual respect for each other’s work, Blair said.

Christchurch-born, Blair describes herself as a ‘‘passionate South Islander’’ - her father and grandfather came from Dunedin - so she can ‘‘really relate’’ to what Nicholls did with materials and land - ‘‘the exquisiteness of his work’’.

He apparently felt the same and, unbeknown to Blair, he showed her works to Cecilia and Megan Mickelsen of Fe29 Gallery in St Clair, Dunedin.

Interested, they approached Blair and so the more than year-long journey to the exhibition ‘‘Fera Natura’’ began.

‘‘I wanted them to come to my studio in Auckland. Certain things are online but you’ve got to meet me in person and see the work and actually choose what would suit their particular unique gallery. I like to know the space, which I didn’t.’’

Blair’s studio is in an industrial complex in Henderson, Auckland. It has the space for her to work as well as to store her works, which is rare in the city.

When not in lockdown, Blair travels from her home to her studio every day to work. It is a work ethic she attributes to her mother, Grace McKenzie, who was an artist and musician, and her father, microbiologist Dr Ian Blair, who was a professor at Lincoln College.

‘‘It’s all to do with a commitment and I have a big commitment to my work.’’

She grew up living on the Lincoln campus enjoying a childhood full of horse riding, skiing and playing the piano.

‘‘I was very classically educated. I feel quite privileged in some ways.’’

One of her early memories is of making a painting at kindergarten and the feeling that gave her. But it was not until much later that her desire to paint emerged.

‘‘I didn’t go to art school feeling all that confident. That came after many, many years. Well it did with me. I just had to work, to keep working, not give up as it is not all marvellous.’’

She should know. She has taught and exhibited for more than 40 years, had more than 100 solo shows and 300 group exhibitions during that time and her work is held by institutions throughout the world, including the British Museum in London, Chan Lui Museum in Taiwan, the National Gallery of Australia and the Museum of New Zealand Te Papa Tongarewa.

Her career began in New Zealand in the 1970s before she moved to the United States with her husband, an architect.

In the 1980s she held solo exhibitions in New York and then in the 1990s in Los Angeles, where they settled for 20 years. She continued to exhibit, teach and hold positions such as visiting artist at the Art Centre College of Design (graduate programme), in Pasadena, California from 1995-2002.

‘‘Meeting students was an eye-opening opportunity. To experience that calibre of thinking, it was very stimulating and helpful for a working artist.’’ 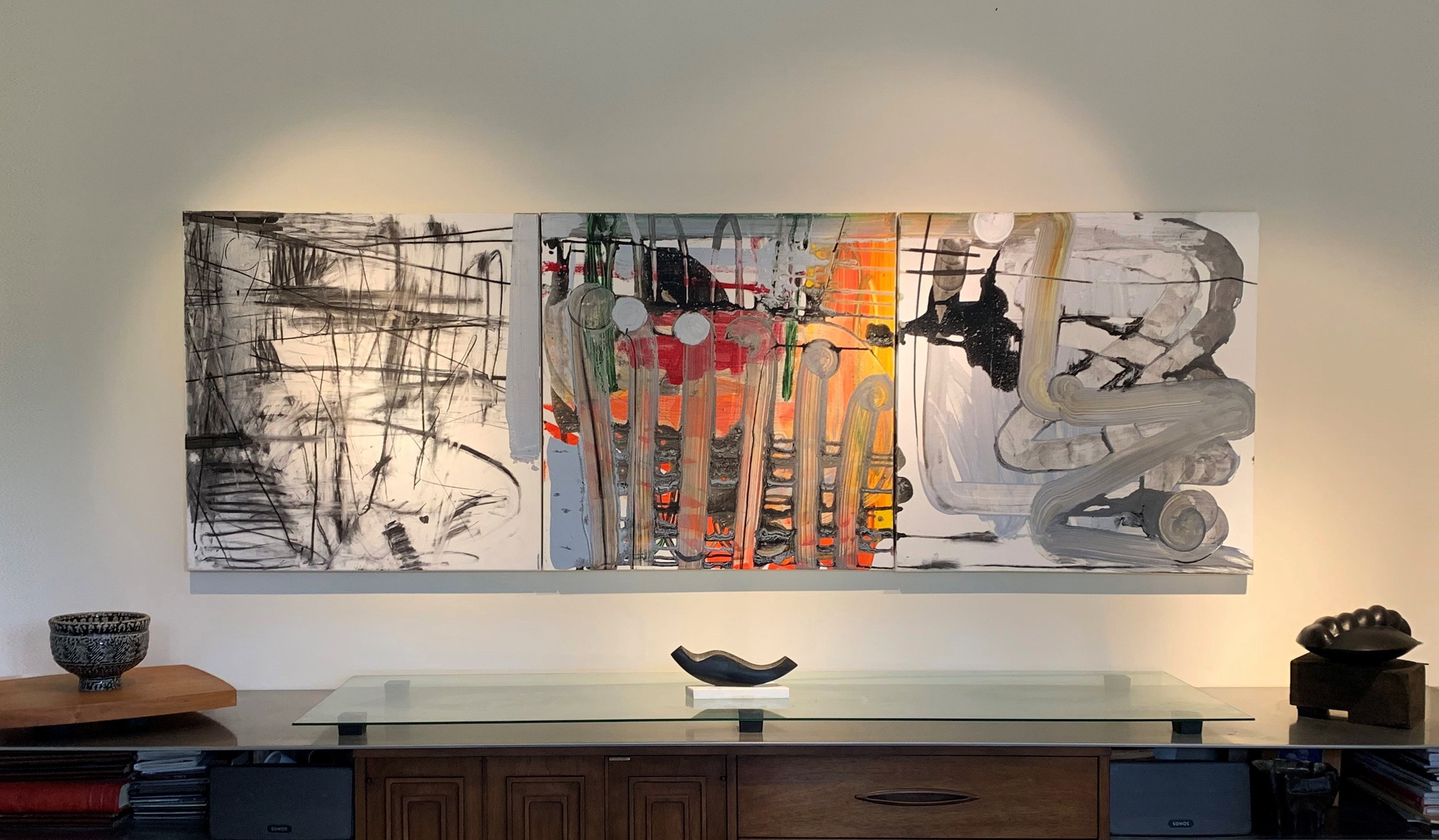 In 1990, her work was exhibited alongside fellow New Zealand artists Ralph Hotere and Christine Hellyer at the Long Beach Museum of Art.

Blair and her husband returned to New Zealand in 2014, which brought with it changes on many levels.

‘‘My relationship to place, to landscape, geography and architecture are all part of the way I think. Being in different landscapes in the US or Australia, or Italy, these are places I have had a lot of influences from.

‘‘And New Zealand, of course. I grew up here, left and returned. I could relate to the environment. I’m very sensitive to nature.

Blair, who has two grown children and a grandchild, says her work is very complex and is the result of ‘‘being alive to the world’’ and its crises.

‘‘I work a lot from my memory, from different languages and music. I think your relationship to the world is about being sensitive to everything, which is exhausting.’’

Creating her works, which are often mixed media, is a bit like composing or poetry but ‘‘it’s certainly not being a politician’’.

‘‘I couldn’t say in a paragraph where the ideas come from.’’

In a way she does not want to as that could prevent viewers from making their own interpretation of her works, she says.

‘‘That’s what the abstract quality is and figurative. They’re not cut and dried in how they should be interpreted - it’s quite a democratic process.’’

Each work requires much preparation as first she draws her ideas - ‘‘not the way I was traditionally taught in art school’’. Her paintings then follow smoothly.

‘‘My work is about exploring different territories - I’m a curious cat.’’

She paints from above with her canvas on the floor calling it ‘‘aerial vision’’.

‘‘I look at it like an orchestration. I like to work in two dimensions or three dimensions. I like to paint a similar way to how I draw.’’

She struggles to make definitive statement about the creative process, she says, as it is something she has lived with for ‘‘as long as I have been alive’’.

‘‘The other disciplines I have worked at seep into this.’’

Painting from above requires the full stretch of her body and is quite physical. It also means she can make marks she could not if working upright at an easel.

‘‘It’s like flying when you see the world from the air. You see a different view, a bird’s eye view.’’

For her earlier works she used unstretched canvases stapled to old carpets laid on the floor.

‘‘You could roll them up. It suited the nomadic years - you couldn’t do it any other way.’’

Some of the marks she makes she likens to map making; others are arcs that could not be done upright.

Blair uses both acrylics and oil as well as anything else she finds in her studio or discarded from the industries in her complex.

‘‘I recover it and find a use for; collage it into a work.’’

The process is a ‘‘secret’’ and quite private.

‘‘People can work it out - you can also just observe it. It’s taken 50 years and a lot of mistakes and false turns. It’s quite experimental, my working method. Not cut and dried. I use a lot of different methods to make a painting and they’ve come to be quite natural so I don’t really analyse them.’’

Once the paint dries she hangs it up and continues to make changes to it.

‘‘There is a process of analysing it once you’ve finished it.’’

Blair says her work has some ‘‘wit to it’’ and some ‘‘cartoon elements’’ come into it by ‘‘accident’’.

‘‘It’s an unleashing of the subconscious - a bit more than painting exactly as how the world is photographed.’’

Couples (2018)
As well as using her memory, Blair takes lots of photographs on her walks, always observing light and shade whether it is on a bridge across the freeway or in suburbia.

‘‘Wherever you go there is something going on. It all registers in your memory.’’

She is also a keen movie watcher and finds ‘‘reels’’ going through her brain of different images.

That has often led to her works developing over two or three panels - ‘‘like the sort of thing you see in movies’ cutting and editing’’.

These days she finds she is faster at seeing where the problems are in works.

‘‘It’s all about problem solving. I really love going to work. I’m enjoying it more.’’

Once she has conquered something, she likes to move on, to keep challenging herself. To keep repeating success inhibits the work, she believes.

‘‘That is the adventure for me. I’m much more relaxed about that. It takes a lot of experience to know if something has worked.’’

With lockdown she is restricted to her small home studio but she is also enjoying the time to read, watch movies and ‘‘catch up’’.

She also has a small garden which she loves and attributes her love of watching things grow to her parents, who were passionate gardeners.

‘‘I love my garden. I go straight into it after work to see what has grown. It’s therapeutic.’’

Now in her 70s, she aims to continue her work for as long as possible.

‘‘It demands every fibre of your being, physically, mentally and spiritually. I’ve got to keep fit.’’

PHILIPPA BLAIR’s ‘‘Fera Natura’’ can be seen virtually at Fe29.com and will open when Covid-19 lockdown restrictions allow.