Moving from computer science and maths to art seems natural for Finn Petrie, as does combining technology with clay. He tells  Rebecca Fox about his graduate exhibition.

Whether it is developing a video game or creating a porcelain epiphyte, Finn Petrie is right at home.

Dunedin Art School master’s student has had a radical (to some) change in direction - instead of doing his doctorate in computer science, he chose to go to art school.

To Petrie, though, the move "feels consistent" and is just an extension of the work he has been doing in the computer lab.

"I’ve always been interested in art. I’ve played music for a long time." 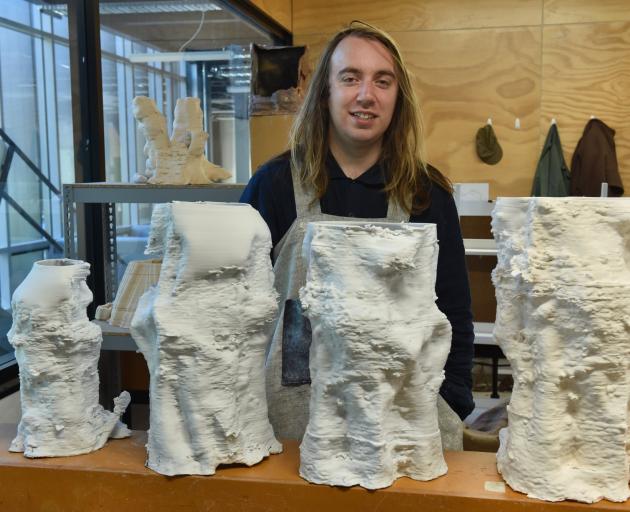 He has discovered there are a lot of artists who operate in the art science sphere since he has started researching for his masters in visual arts.

"I wanted to use my skills to make something."

It all came about after he started playing around with some ideas he had had in his undergraduate years while studying computer science and maths at the University of Otago about making things over a summer break.

"I thought maybe I should pursue this. It was a slow emergence."

After starting art school and talking to its former head, Bridie Lonie, who suggested he try the 3D ceramics printer the school had, he found things started to become clearer.

After digging it out and getting it going, he found the process interesting.

"I started to play around with it and thinking of ideas of what to do with it."

With no knowledge of clay printing, he had to start from the beginning, learning the processes involved and how it worked.

"It wasn’t fully functional. I had to play around with the consistency of the clay and other parameters to fully realise the works."

His computer science background came in very handy working on the software and designs needed for the printer to work. 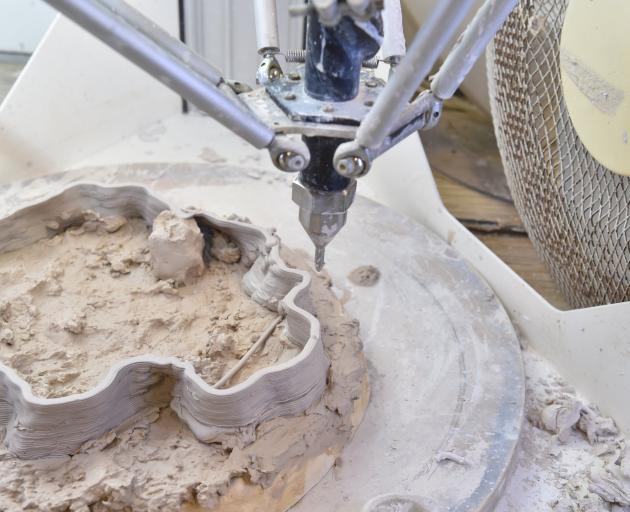 The Dunedin Art School’s 3D clay printer at work on one of Finn Petrie’s epiphyte creations.
While 3D printing is not new, doing so with clay is more so, and there are not a lot of online resources to assist, he found.

Petrie, who is from the small Canterbury town of Swannanoa, found the clay to be quite "disobedient", so learning the process took a lot of trial and error. In the end, he decided to embrace the process.

"I sat by the printer and could make changes to the work as it was printing.

"It breaks easily, it’ll skew and won’t do what you tell it to, so I decided to lean into it. Thinking of it more as giving agency to the technology in the process — a more collaborative process. You can’t predict what comes out, ultimately."

For the design he chose to look at epiphytes — any plant that grows upon another plant or object merely for physical support — with the idea of placing them in trees around the city as interventions for other plants to grow on.

He has named the exhibition "Epiphyptic Memory" as he hopes plants, lichen or moss will grow on the pieces.

"Hence why I’ve called them houses for plants by plants."

He was particularly taken by the native fuchsias he saw in the Catlins and how the plants became entangled together.

"It was the relationship between the plants that I thought was more interesting. The prints have come out very abstract and entangled. You wouldn’t immediately think of a plant. They come out looking like fungi perhaps."

Petrie scanned images of the epiphyte sites into the computer which then "printed" the design in clay.

Once printed, the pieces came to about 1m to 1.3m high, but the final pieces after firing were about 40cm to 1m.

He also had to learn how to use the kiln to fire the pieces.

"It’s been fun, there has been lots of new stuff to learn."

Petrie has really enjoyed the freedom to explore new ideas and take things in different directions.

"Coming from my background it’s been different but exciting." 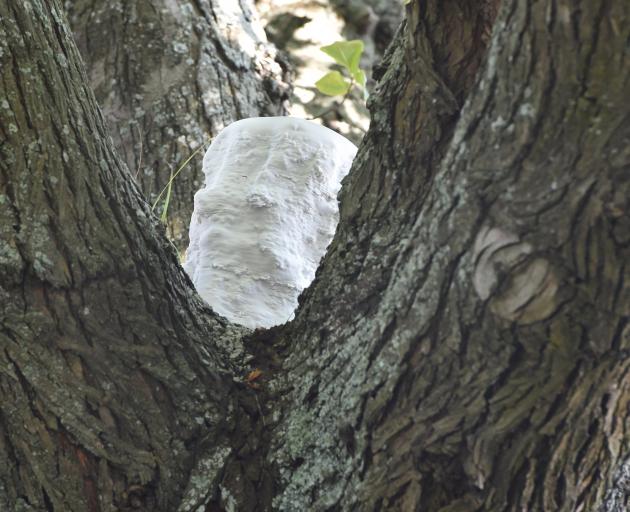 One of Petrie’s pieces in its home in a Dunedin city tree. Passers-by have mistaken the work as "some strange fungus", which the artist thought "a good response".
He sees parallels between his science background and art but admits a lot of his work for computer science was technical, focusing on software engineering and simulations.

"You are making in programming, but with a slightly different goal in mind."

At art school, there was more thinking about the role technology plays and looking at it from a more cultural perspective, he says.

"What does it mean for culture, and how to respond to it more."

He also has attached some of his creations to trees in Anzac Ave and at Ross Creek, with the permission of the Dunedin City Council. They have been placed in joins of trees where there are already mini ecosystems with other plants such as grass growing. He hopes they will remain there for five to 10 years.

"They’re very discreet. If you just walk down the street you probably would not notice them."

He had had some feedback though that someone had noticed one, thinking it was a strange fungus growing in a tree.

"I thought that was a good response."

He chose Anzac Ave as there had been a study done on pollution and its impact on biodiversity on the street 20 years ago.

"So they are situated in response to that. In time, there may be potential to do a scientific study on lichen biodiversity and air pollution quality, but this is more in the background of the project at this time."

Putting his work on display in a gallery for the first time is taking a lot of planning and plotting out.

"I feel I am getting there. It’s starting to feel consistent in my mind."

The "plant houses" form part of a multi-media installation in the gallery which looks at how they interact with time.

"An augmented reality simulation — which plays out on a site-specific, and fictional forest floor — speculates on the possible futures these structures might come to, envisaging their collapse or a rich, yet digital botanical germination, while a 4 channel video work observes the placed forms in situ.'’

Petrie is not giving up computers, as with his masters complete next month, he has his part-time job as a software engineer with Animation Research and funding from the Centre of Digital Excellence to create a video game to get on with.

He also has a few more ideas involving plants and technology that he hopes to continue to look into and exhibit in the future.