Cellist bowing to the inevitable 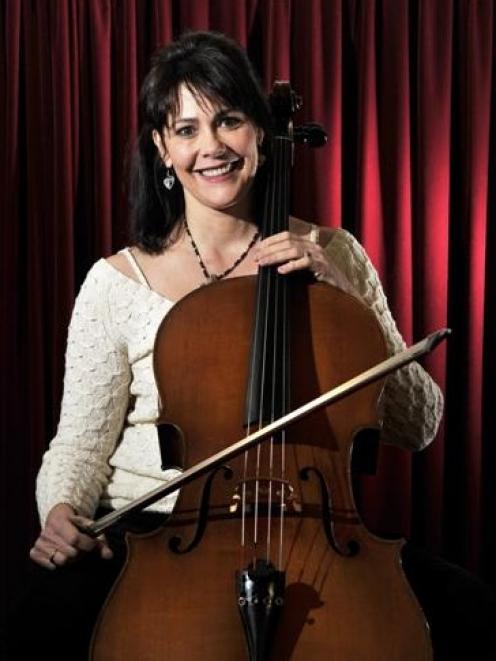 When she was young, Heleen Du Plessis desperately wanted to play the cello.

"When I went to orchestras, I would look at the cellos and if you asked me the theme of a symphony of Beethoven I would probably sing the bass tune, the cello tune," she says, laughing.

The South African cellist arrived earlier this year to take up a position as William Evans executant lecturer in cello at the University of Otago and will give her inaugural recital, accompanied by Terence Dennis on the piano, on Saturday, September 11 at Marama Hall, and another recital during the Otago Festival of the Arts on October 12.

Growing up in a musical family (her father was a violinist and her mother an organist), she learnt the piano from a young age and, having pestered her parents, she took up the cello from the age of 7, studying with Julian Hart at Cape Town University.

"He inspired me so much," she says.

She was shattered at his sudden death when she was 10 and declared she would not play again.

Then his parents gave her his cello.

It is still the instrument she plays.

"It's a French-made cello, about 100 years old, and has a beautiful sound. I've tried many other cellos overseas that cost triple the amount and never found anything as special," she says.

Despite her love of the cello it remained her second instrument (piano was her first) until the last year of her music degree in the mid-1980s, when she decided to specialise.

Her husband, a diplomat, has had posts in Switzerland, where their two sons were born, and in the US but this time they have moved to Dunedin for her to take up the position at the university.

It involves teaching and performing, which is rare in universities, she says.

At Pretoria University, South Africa, teaching positions are part-time and musicians are expected to perform freelance.

"That was handy if you have children but it also has disadvantages.

"While you are preparing for concerts, you don't have time to teach and concerts don't pay enough for the time it takes to prepare, so it's difficult to make a living out of freelance performing in South Africa.

"So this job was ideal for me because I love teaching at university level and I like academic institutions - I'm busy with a doctorate, and I want to perform," she says.

She has returned to South Africa for concerts twice this year.

One was to play the Schumann cello concerto with the Cape Philharmonic and the other a concert with the Musaion Trio.

It will probably be the trio's last concert, she says, as she will now put her efforts into the new TriOtago, a piano trio formed by Prof Dennis, violinist Tessa Petersen and herself at the university.

Travelling with a cello is always a challenge.

Sometimes she wishes she had taken up piccolo or oboe, she says, laughing.

"One of the things my father told me when I was little: 'OK, you can play the cello but you are going to carry it yourself'.

"And I always remember that when I'm at an airport or trying to get a taxi in America.

"Taxis don't want to stop when they see the cello because it takes up so much room."

On a plane, she either has to pay for excess luggage or an extra seat - and they charge full price for the ticket even though the cello doesn't eat or drink, she says.

It is always a problem getting the cello through security and on to the plane.

Although it has a ticket, it is not issued with a boarding pass because it doesn't have a passport.

Recently, at Sydney's airport, she was sent back and forth between airport and airline personnel because of misunderstandings, she says.

In its flight case, the cello weighs 16.5kg, and there is always the risk of it going on a different flight and getting lost if it is checked in as excess baggage.

"It feels a bit like a child and it's not replaceable if it's lost or damaged. I don't want to think about what would happen if it got lost on the way to a concert.

Luckily, her next two recitals are here in Dunedin.

On Saturday, September 11, in her inaugural recital, she and Prof Dennis will perform Debussy's cello sonata, which she says is full of atmosphere and displays a lot of cello techniques.

Originally titled "Pierrot angry with the moon", it is sad and ironic, she says.

"What is interesting in the Debussy is imagining the Pierrot, the clown with a white face, and I find it is also an element in the Shostakovich, which is almost mocking death - on the surface being happy, but on the inside the sadness or bitterness.

"So the contrast between the grin on the face but discontent inside, especially in the Shostakovich, the bleakness and disillusion with Russia and the circumstances and the anger and anguish and all these - I find it very satisfactory to play.

"In contrast, the Rachmaninov has all the orchestral emotion, beautiful, surging melodies, all these beautiful themes on top of the piano which is so rich and dramatic and passionate, so I love playing the Rachmaninov."

On October 12, as part of the Otago Festival of the Arts St Paul's at One series, she will perform works by Chopin and Schumann - the 200th anniversaries of their births are celebrated this year - accompanied again by Prof Dennis.

She will also perform a work by South African composer Jeanne Zaidel Rudolph.

Next year, she plans to present a programme by South African composers, and to combine cello with indigenous instruments, both South African and Maori.

"My motto is, 'anything sounds better with cello'," she says.

"It's easy to play things that are well known.

"Not a lot of people want to play contemporary things.

"It's difficult to learn but I think I'm now ready for it.

See her, hear her

Heleen Du Plessis (cello) and Terence Dennis (piano) will give a recital in Marama Hall at 7.30pm on Saturday, September 11.

They will perform in the St Paul's at One series during the Otago Festival of the Arts on October 12.