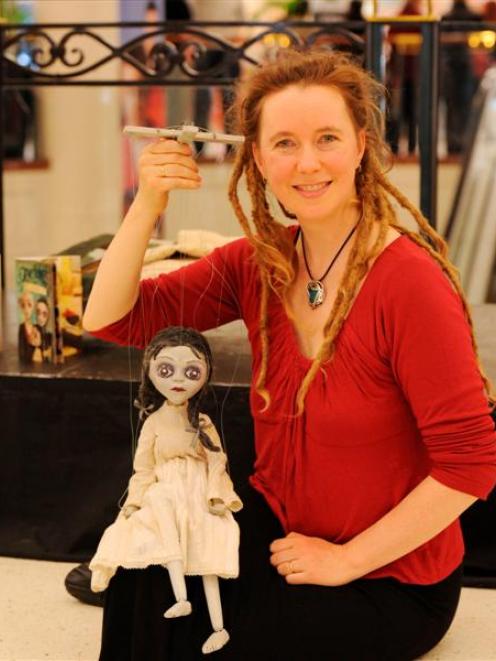 Puppeteer Asphyxia with "Martha Grimstone" in Dunedin yesterday. Photo by Linda Robertson.
It's hard to know where to look when talking to Australian puppeteer Asphyxia.

Between them, sits a glowering puppet which looks like a working model for Edward Scissorhands.

Asphyxia - her real name, she changed it by deed poll a decade ago - originally trained as a ballet dancer, but was rejected by the Australian Ballet School because of her deafness.

So she turned to circus arts.

"I was hungry for a physical discipline which gave me the freedom to be deaf, to be different and to use it as an advantage rather than try to cover it up," she said.

Opportunity met preparation when she befriended Chilean puppeteer Sergio Barrios on the streets of Guatemala.

"Puppets are quite rare in our part of the world and marionettes are very rare. But, they're old European traditions. Puppets can be very expressive and lively."

Asphyxia developed The Grimstones over 18 months in the loft of her Melbourne home.

"I wanted to create another world. I love making things. The Grimstones were all made from recycled bits and pieces of junk."

The show proved so popular that publisher Allen and Unwin commissioned a series of Grimstones books.

Asphyxia has now written two Grimstones books, and a third is to be published in December.

"The Grimstones aren't at all scary. The show is aimed at anyone who likes a Gothic fairy tale or a world in miniature. It's not a traditional piece, with the puppeteers hidden behind a velvet curtain. The performers walk through the set and interact with the puppets.

"For children, it's a miniature world they can relate to. The adults know they're not real, but enjoy the suspension of belief. All the puppets have their own characters. They're like babies, really.

"The show is very carefully and tightly choreographed. You have to be careful not to tangle the strings together when the characters come together."

The central message of the show was about accepting people we consider to be different, she said.

Hatched is on at the Fortune Theatre at 2pm and 6.30pm today and 2pm tomorrow.