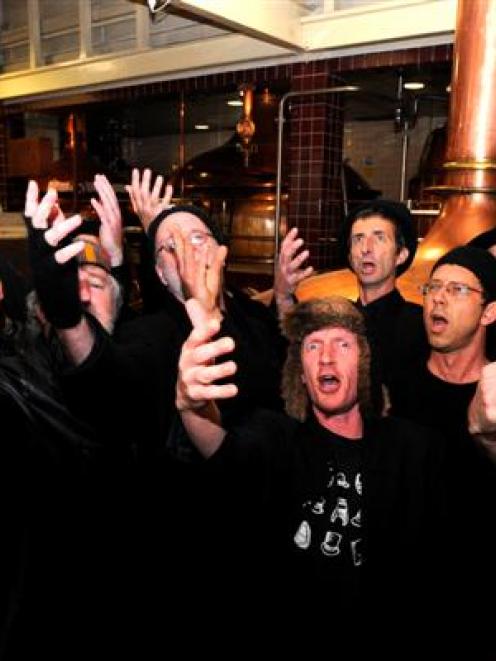 Men with impossible beards and funny hats, looking around warily.

But, then they cleared their throats and began to sing.

"None of us are professional singers.

"But, from the time the 'Spookies' first appeared on stage they immediately struck a chord with the audience.

"The music we sing has such beautiful harmonies.

"The warmth, texture and rustic harmonies appeal on a musical level and a human level." The chorale puts a Georgian spin on everything from power tools to Abba covers, as well as covering traditional spooky songs.

"The starting point was at night at home in a darkened room with a glass of wine listening to Georgian music," Taberner said.

"I started with the name and everything flowed from that, really."

The central theme of the show was an ironic look at modern masculinity, he said.

"The show is a humorous, but warm view of masculinity.

"The whole thing of masculinity is mercilessly poked fun at, because it is completely ridiculous."

The Spooky Men's Chorale had some important business to take care of before its debut New Zealand performance in Dunedin last night.

The chorale produced the We Can Grow Beards If We Want To theme song for the recent Speight's Breweries "Man Like Natural" television advertisements, so its members couldn't wait to visit the old brewery after arriving in Dunedin yesterday.

And, once among the coppers and hops, they were so moved that they could not help bursting into song.

It was as stunningly beautiful as it was aesthetically confrontational.

"The general aim of the show is to make people weep with laughter and cry at the beauty.

"It's a full emotional experience. We are trying to acknowledge beauty, as well as being a bit ridiculous," Taberner said.

"It's funny but not stupid. Well, perhaps slightly stupid, but not foolish. Except for the silly bits."

The Spooky Men's Chorale appears at the Kings and Queens Performing Arts Centre at 4pm today and 2pm tomorrow.