Cut out for play role after visit to the hairdresser 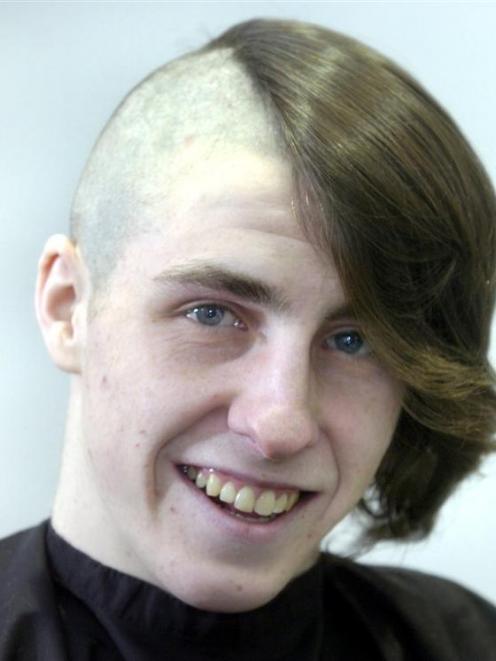 James Lee loses his locks for The Cape at Why Not Hair? Photo by Jane Dawber.
The lengths some people will go to for art.

Actor James Lee went from a mod to a skinhead on Thursday to prepare for his role in the Otago Festival of the Arts play The Cape.

The 19-year-old plays a teenager with cancer in the Wow Productions play about four New Zealand teenagers who take a road trip to Cape Reinga.

"I feel a bit sick about it, to be honest.

''But it will be good for surfing," Lee said.

"With long hair you keep getting hit in the eyes.

''My girlfriend [Sarah Elsworth] isn't too happy about it, though.

"I've bought a selection of hats, so I can hide it with a beanie."

Other actors in The Cape supported Lee by attending the close shave by hairdresser Cameron Aitken-Boyle at Why Not Hair? in Albany St.

"But we'll laugh about it when he can't hear us."

The Vivienne Plumb play is a rite of passage for the four teenagers as they argue, fight and share their deepest secrets on the journey to the northern tip of New Zealand.

Producer Clare Adams, who assembled most of the cast from her University of Otago theatre studies group, said the play was a colourful adventure about young New Zealanders.

"It's a play about a group of 18-year-old New Zealand boys on a road trip and director Simon O'Connor was very keen to get young guys, rather than age-down older actors."

The Cape plays at the Playhouse Theatre from October 7 to 25.