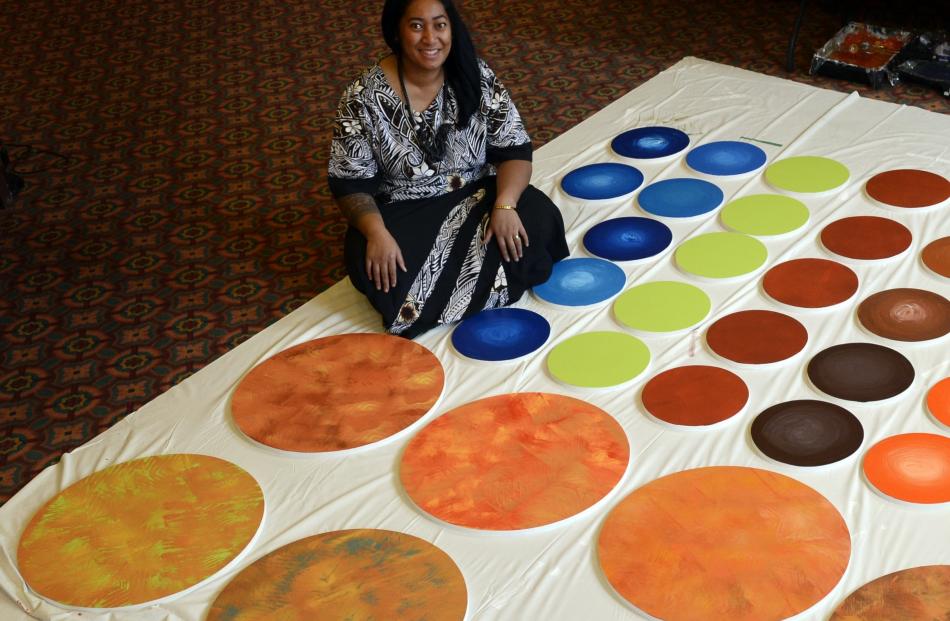 Dunedin artist Ana Teofilo Fa’anunu with some of her art works she is preparing for her solo show. Photo: Gerard O'Brien. 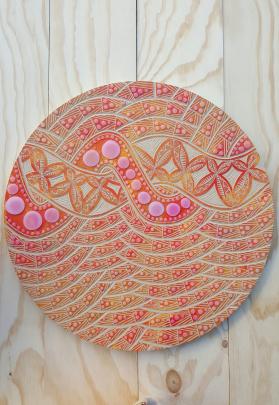 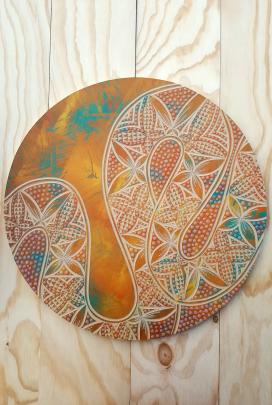 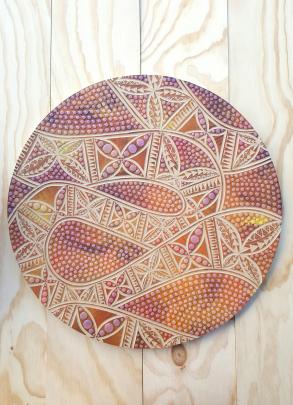 Dunedin artist Ana Teofilo Fa’anunu is about to have her first solo show in Auckland. She tells Rebecca Fox about taking that next step.

Listening to her gut feeling rather than outside advice has led to success for Dunedin artist Ana Teofilo Fa'anunu.

''I'm happy I did but it was quite hard to go against that advice.''

Teofilo Fa'anunu, who is just using her maiden name Teofilo for the exhibition, specialises in round wood images that she intricately carves and paints.

The artist's Pacific Island heritage (her parents are Samoan) is heavily reflected in her work.

But it took a long time for Teofilo to find her way - she originally studied fashion and creative studies.

''When I left school my heart said art and my head said fashion.''

When she decided to follow her arts dream, she left Dunedin for the bright lights of Auckland to study for a bachelor of visual arts degree at Unitech but yearned for home as she struggled to find ''me'' in the art world.

'' I thought I would since there is such a strong Pacific Island population there. Something was missing.

''I knew I wanted to be an artist but I wasn't getting what I wanted as an artist in Auckland.''

Teofilo had stared to experiment with the ''glue dot'' concept but was advised against following it up.

''I had a feeling in me, a real passionate feeling about the glue dots, that I hadn't seen or known before.''

So she returned to finish her degree at Otago Polytechnic's School of Art. It was in her final year that she discovered carving.

''I needed to get back home to where my family is. It's what I was missing.''

She kept coming back to the ''glue dot'' concept and was again told to drop the idea as it was too limiting, she said.

''Hearing that again was like a big no-no for me. So my goal was to make those who didn't like it, like it. One of the lecturers ended up telling me they really enjoyed the texture and final look of the art works.

''That was a big compliment. Completing that task and proving them wrong.''

She learnt a lot about what to take on board but also to go with her own intuition.

''At the end you've got to be happy with what you are doing.''

The works were all about linking Dunedin and the western with the Pacific Island.

''The painting is the western, the bright colours is of Pacific people and the carving is just what I love doing.''

It was at this stage she realised she could finish something and wanted to investigate it more.

''My glue dotting has come a long way. My first one was really messy. Finding ways to do it quite fast as well. Fast and neat. I like to think I've mastered it.''

She has since finished her masters in fine arts and held her first solo show in the Community Gallery last year. Teofilo has also shown her work at the art school and Dunedin dealer gallery Gallery De Novo.

''It was really good experience.''

From there the Warwick Henderson Gallery in Auckland approached her to appear in a group show and again one of her paintings sold.

That led the gallery to offer her a solo show this month.

However, she was aware she needed a point of difference from other Pacific Island artists.

''It was definitely the carving technique and glue dots do that.''

She made each dot using a hot glue gun, constructing the frames herself at the art school and then painting them white at her Stuart St studio.

''The colours come from me wanting to make ugly colours pretty or putting colours people wouldn't like and make them like them.''

Teofilo uses rollers to create the swirls, wiping the paint off when it is still wet to smudge the colour - a technique she borrowed from German artist Gerhard Richter.

''I love my bright colours. I layer one colour down, then a tonal one and keep layering until I'm happy.''

Teofilo usually designs each piece in her ''plan book'' before she starts. She takes a photo of the work and then draws on the photo copy of it, painting the patterns she wants to do.

Then she picks which design she likes best and starts carving. She really enjoys the carving - freehand.

''I love carving. It's something about the tools.

''The glue dotting is the last stage.''

Art school had helped her to recognise when a work is finished.

''I have the feeling when it's finished. As the artist you have the final say.''

She always feels attached to her art works.

''I love that I feel attached. I love what I do and I love all the extra hard work and then when I have a show it is so satisfying.''

For this exhibition she has created 10-12 works that are smaller than her normal ones.

''There will be more carving details, they'll be more intense.''

The beach near my grandparents' house is called Return to Paradise.

''So a lot of my inspiration is from that cove in Samoa.''

And then a ''Return to Peace'' reflects the experience of her grandfather dying on Boxing Day last year.

''So I guess there is some sort of peace. I wasn't able to go to his funeral so this whole show will be acknowledging my granddad.''