Wielding a rug-tufting gun, Megan Brady can almost feel her muscles start to ache, but despite this the gun has been her saviour.

Brady's installation at the Dunedin Public Art Gallery centres around the creation of wall-to-wall carpet and is titled ''A Quiet Corner Where We Can Talk''.

''I had no idea how to make carpet. I wanted to see what it felt like to make it.''

The recent Dunedin Art School graduate has been inspired by the anonymity of transitory public places, and how by not wanting to offend anyone, they are so stripped back they cater to no-one.

''I was drawn to, entertained by these furnishings - the carpet at the airport, covers on bus seats.

''There is so much I find interesting about our surroundings. It all informs this work one way or another.'' 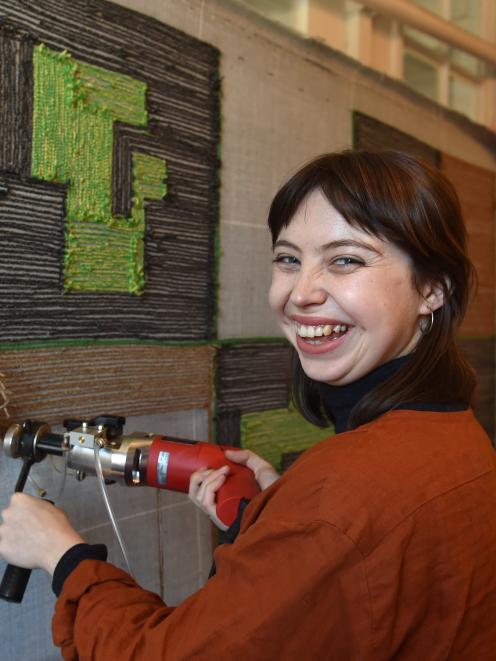 Megan Brady fits her carpet at Dunedin Public Art Gallery. Photos: Peter McIntosh
So when she saw the space at the gallery, she was drawn to the L-shaped space.

''It has developed very much from the physicality of the space and how you respond to it - I spend many months drawing the floor plan so I knew it had to be incorporated into the work somehow.''

So the wall-to-wall carpet in its neutral colours features a green outline of the space.

''I wanted to feel the cushioning of the carpet so that you cannot necessarily hear footsteps in the space.''

It will be complemented by soft wall colours and custom-made elevator music - another aspect of public spaces that is stripped back so it fills a void with comfortable, calm, soft sounds.

The space also influences the music Brady is recording herself using a software program, with the beat, counts and length of the track all drawn from the measurements of the room.

''It correlates nicely with the carpet design, which is to be seen but not looked at, and the music, designed to be heard but not listened to.''

To make her ideas a reality required learning how to make a carpet.

She started by physically hand-tying knots in the way of a Turkish rug.

After two days of solid work, she realised there was no way she was going to be able to make a carpet on the scale she needed in the time she had.

''It wasn't going to be physically possible.''

Then she found the ''amazing machine'', a hand tufting gun, which enables her to work much faster.

''I've been doing it consistently day and night for two months.''

Finding enough wool has also been a mission. It meant her dreams of soft yellows and beiges and pastels had to be sacrificed for what she could find off internet trading sites and

op shops, until two anonymous donors came on board.

''So many different people have helped me get over the obstacles and problems.''

It has been a challenging project for Brady, as it has required quite a bit of physical work.

''I've witnessed my body adapting to the physical action. I've needed lots of massages and baths.

''It's been a very difficult project physically, mentally and emotionally.''

With a fascination for the people who decide and match names to paint colours, Brady often uses the seasonal predictive paint colour charts companies put out.

The predictive colours she discovered were mostly whites and neutrals - colours that, again, please everybody.

The project has been a major one for the Wellington-bred artist, who moved to Dunedin five years ago to study art after stumbling upon the Dunedin School of Art while visiting a friend. She specialised in sculpture and finished her master's degree last year.

It has enabled her to continue her other love, working at the Margaret Freeman Gallery, a space for Dunedin-based artists with intellectual disabilities.

Brady discovered the inclusive art space during the Otago University Students' Association Art Crawl a few years ago and began volunteering there.

She is now employed as an arts facilitator at the Gallery's Studio 2, supporting those in the day programme.

The work helped her remember simple creativity without the over-thinking and critical thought that came with her studies.

''It's a blessing. It reminds you to make because you like to make. To purely express yourself.'' 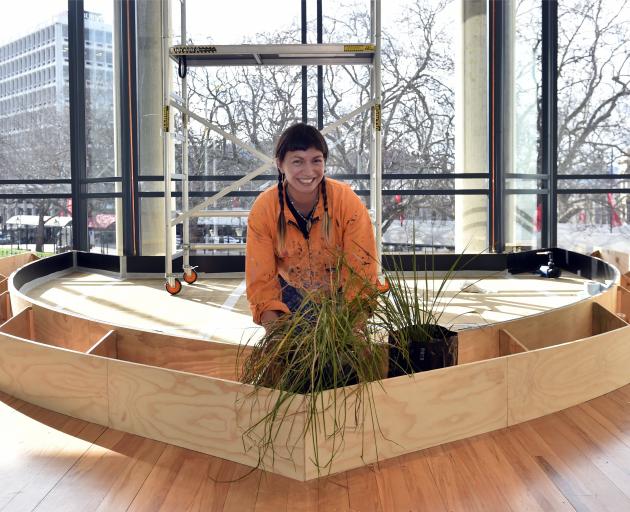 Painting bitumen sealer on to marine ply does nothing for the hands.

Aroha Novak might have escaped the painting to do this interview but the bitumen still clings to her hands.

She is working against the clock to get her ambitious project, ''Cascade'', completed in time for tomorrow's exhibition opening.

It is ambitious because she is creating a pool on the second floor of DPAG, a pool with a rain shower above it - running water in an art gallery.

That means she has been on her hands and knees sealing, resealing and sealing the pool again to ensure there is no way water can escape.

The project has required Novak to learn a lot of new skills, but that is what her art practice is all about.

''I try to keep open to different mediums and ways of doing things.

''I have a short attention span so it's good to learn new skills - but there is a fine line between learning new skills and mastering them.''

Just like learning to cast concrete figures or painting the large murals she and street-art partner Guy Howard-Smith have created around the city (Buller St, Rattray St).

''You gain more confidence; you can gauge the wall better and the paint amount.''

While her latest project has tested her technical skills, it is also extending her body of work around the concept of catharsis, using water as a metaphor.

''I've sort of veered off to look at the Romantic period of painting and the work of William Hodges, Captain James Cook's official artist on his second journey to New Zealand.''

One work in particular has captured her attention, a 1773 painting of a water scene in Dusky Bay/Cascade Cove.

''I decided to re-create or represent this painting in 3-D through my own perspective rather than a European male's perspective.''

Alongside this is Novak's own exploration of her part-Maori heritage. She has been learning te reo and researching her whakapapa in an effort to reconnect with a part of her family heritage she did not know much about.

She hopes the pool will create a ''utopia inside an institution'' with the idea it will bring spirit into a confined space or rigid structure - ''a Maori world-view within a Pakeha structure''.

''I'm trying to create a space where you can go and sit and feel like you are in an outdoor space ... but you are inside.''

Its creation has required much technical advice and help from DPAG's technical staff.

Another Dunedin School of Art graduate, Novak, a mother of two, completed her master's degree in 2013 and is ''stoked'' at getting the opportunity to show at the gallery.

''I've been grinding away for a long time so it's great to be able to work with the gallery and also to realise a work on such a large scale with technical help. I'm used to doing everything myself, so this has been a bit dreamy.'' 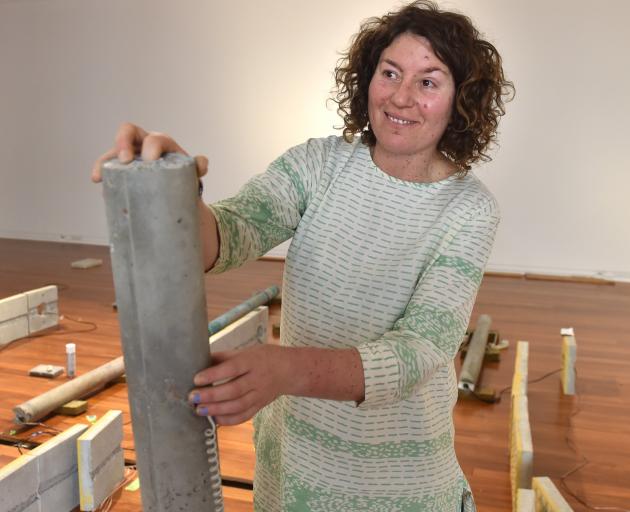 Trekking through quarries and looking down road manholes are not everyday activities for an artist.

But for Charlotte Parallel it became an integral part of her investigation of Dunedin's landscape; in particular, what it sits on - a volcano and the idea of ''listening through rock''.

So she enlisted the help of a geophysicist to provide equipment to help her understand its history.

''We ended up in all these quarries. So all this rock, basalt is our roads, the sides of train tracks. So then I was quite interested in the idea of how it's being used.''

That raised the dilemma of how to get under the roads.

So they asked the Dunedin City Council's water services if they could open up their water holes so they could put in place sensor instruments. They also put one in the Speight's tunnel.

''One of the amazing things about the manholes was there are all these underground streams like Toitu run through so there was this beautiful way of thinking about all these systems from the road down.

''It's totally fascinating. Thanks to the generosity of the water services guys.''

Some of the pipes were built in the 1800s and that got her thinking about how the earth has always been moved and changed.

For ''Deep time'', her work at DPAG, she wanted to bring all forms of the rock - concrete, sand, asphalt and bitumen - together. So she made 12 1.5m-high concrete poles from the different materials.

They have room for copper telephone lines to run within so people can listen through classic landline attached to the poles.

Parallel wanted to show the ''strata'' of use as well as the ''cycle of uses''.

''It's quite physical work to make. It's been a great opportunity to learn to make new things and meet amazing people.

''It was really nice, all these different processes I had to learn to do.'' 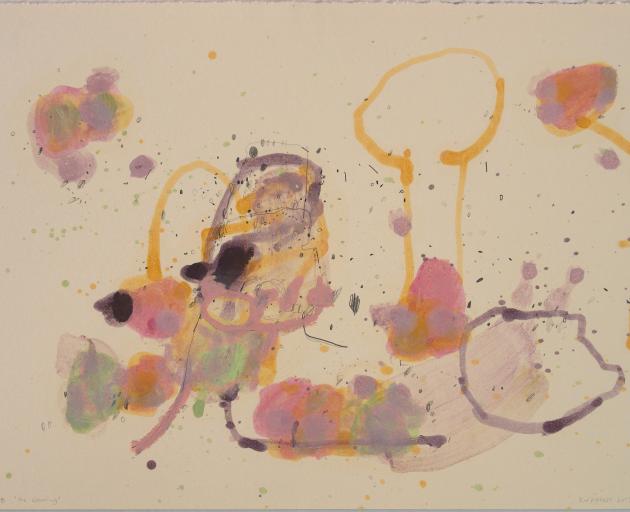 Gesture, colour and line are at the core of Kim Pieters' practice and her work ''the clearing''.

Pieters, a non-representational painter, photographer, writer and film-maker, did not want to be interviewed for this piece so information supplied by the gallery explains that her work brings together two bodies of work that reflect the dual strands of her practice: paintings (large works on board) and drawings (intimate works on paper).

''For Pieters, non-representational art does not present a simplified/reduced version of something that exists in our visual world (as with abstract art), but rather, it focuses on colour, shape, emotion and gesture.''

The presence of language within Pieters' practice is fundamental to the way it operates. Titles, which are often drawn from philosophy, poetry or music, act as a supplement to the work itself - sitting independently but in conversation with the work.

''Pieters' work, whether on board or paper, starts with an empty field. A gesture is then made within this field; mark-making which informs each subsequent gesture - eventually building up the final composition.''

She won the National Contemporary Art Award last year for her work The Meaning of Ethics.

In the gallery space, Pieters presents each composition and the title to the viewer and asks them to draw on their own thoughts, ideas and experiences.