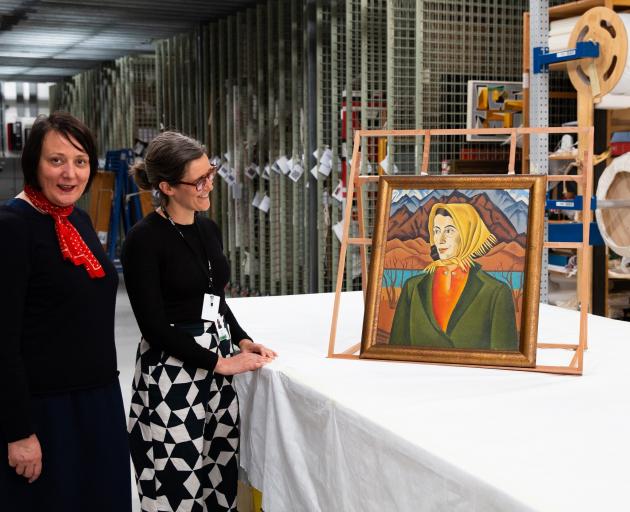 Te Papa head of art Charlotte Davy and curator of modern art Lizzie Bisley with Rita Angus’ Marjorie Marshall (1938-39/1943). PHOTO: JACK FISHER, TE PAPA
One of the leading figures in 20th century New Zealand art, Rita Angus had a soft spot for Central Otago. On the eve of an exhibition of her work opening at Te Papa, curator Lizzie Bisley talks to Rebecca Fox about Angus’ love of the region.

A striking portrait Rita Angus painted of her good friend and fellow artist Marjorie Marshall, set against the backdrop of Central Otago mountains, is a new acquisition for Te Papa.

It is also significant, in that Marshall was one of the drawcards for Angus visiting Central Otago many times.

Te Papa modern art curator Lizzie Bisley says Angus studied art with Marshall (1938-39/1943) in Christchurch at the Canterbury College School of Art before she and her husband moved to Wanaka where Angus visited and stayed, sometimes for several months.

Another part of the region’s attraction was the family connection. After emigrating to New Zealand her father established a carpentry business in Naseby in the late 1800s.

"So she saw a connection to the landscape. She was gripped by the beauty of it."

In letters held at the Alexander Turnbull Library, Angus wrote to friend and composer Douglas Lilburn, saying "I loved Central Otago, & was most happy there, enjoying going & painting where I wished."

Lilburn was also a fan of Central Otago, having been captivated by the landscape, saying it was full of music. So he commissioned Angus to paint a watercolour of Central Otago, subsidising her travel and sketching trips to the region. 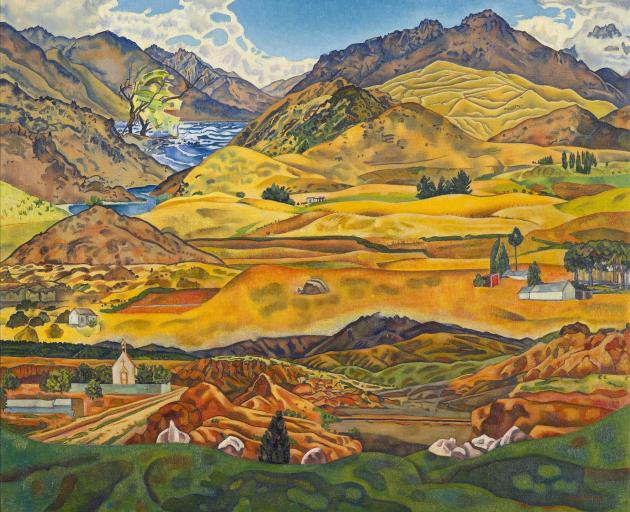 Rita Angus’ Central Otago (1953-56/1969). Collection of the Museum of New Zealand Te Papa Tongarewa, gift of Douglas Lilburn, 1972 © Reproduced courtesy of the Estate of Rita Angus.
Then in March she writes to Lilburn again.

From there she decided one of the sketches would make an oil painting which was to become one of Angus’ most noted works, Central Otago. Lilburn gifted the work to Te Papa.

The painting is a composite of Central Otago landscapes featuring recognisable landmarks such as a church at Naseby, a wind-tossed tree beside Lake Wakatipu, the Kyeburn diggings, and the main street of Arrowtown layered together.

"It’s the most amazing, unbelievable, ambitious painting. Its scale is fantastical; it’s rather a view as she saw it."

Angus describes the work in a letter: "I’ve painted at least half of Central Otago — mostly high hills, with more detail than what remains to be done. After the one festive week or two of the year is over I’ll settle again to oil painting. "

"She was extremely perfectionist, constantly revisiting the work making little adjustments along the way," Bisley says.

In a letters to Lilburn she comments on the delays regularly but justifies the extra time.

"I’ve been quite concerned taking so long, as well as reluctant to continue until equal to it. I could easily have spoilt the work. The way I’m working I hope the painting has a chance of survival for a long time." 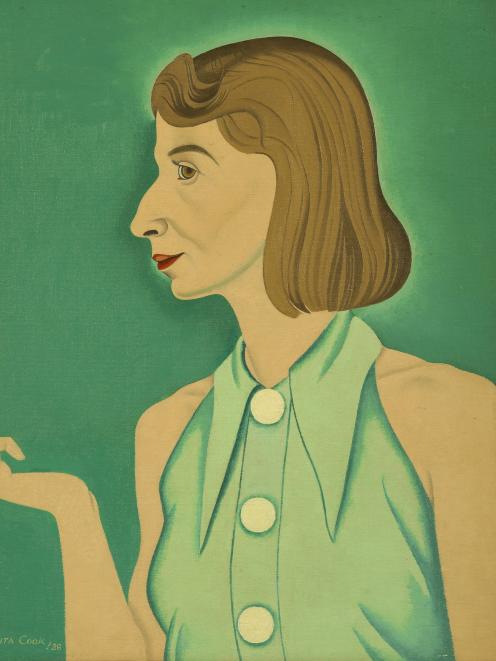 Rita Angus’ Cleopatra (1938). Collection of the Museum of New Zealand Te Papa Tongarewa, bought in 1998 with New Zealand Lottery Grants Board funds. © Reproduced courtesy of the Estate of Rita Angus
The work is central to Te Papa’s "Rita Angus, New Zealand Modernist, He Ringatoi Hou o Aotearoa" exhibition opening on Saturday which features more than 70 of her works.

"It is remarkable how much power and relevance her paintings still have today.”

The exhibition will be accompanied by a full catalogue, Rita Angus: New Zealand Modernist, featuring all the works in the exhibition and anchored by two major essays by Angus’ biographer Jill Trevelyan and London’s Royal Academy of Arts chief curator Dr Adrian Locke.

Bisley says Central Otago contrasts with another of Angus’ major oil paintings from 1940 on the region which is in the Auckland Art Gallery collection. It has a more stylised, crisp view of the Central Otago landscape.

"It was a major shift to her painting as Lilburn’s was so densely layered, this glowing ball of colour conveying a sense of feeling for the landscape."

From that time, Angus also painted a self-portrait and the one of Marshall.

"The mountains are behind both," Bisley says.

"The 1940s paintings have these clean, crisp lines and an amazing perspective. Marjorie Marshall feels like she is right in front of you. There is this liveliness and brightness of the sky and mountains. You can see the breeze blowing her heard scarf back. There is a lot of energy to the painting."

Another of her earlier portraits, The Aviatrix (1933), has recently been purchased by Te Papa and is also included in the exhibition.

It is of her sister Edna, the first woman pilot in the East Coast Aero Club, wearing her flying costume. 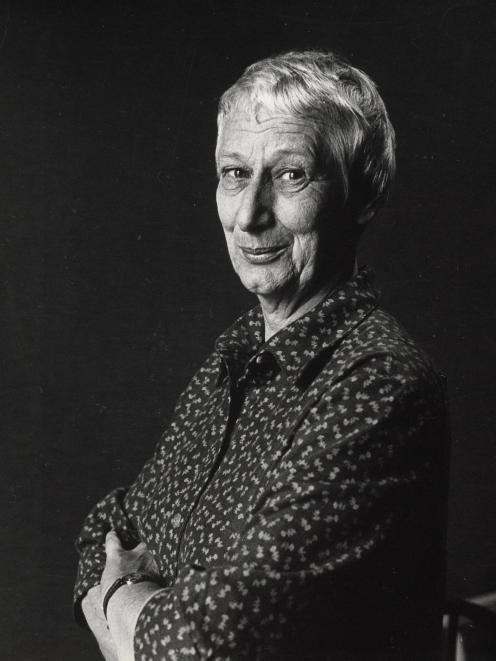 Bisley says Angus’ total conviction of the importance of her work as an artist and of the wider impact it could have is very impressive.

"She believed in art as a force for societal and intellectual change and that her painting could help to shape a different kind of New Zealand."

Angus held that commitment to being an artist even though it meant living a quite threadbare existence, relying on a lot of support from friends and family.

To keep the "wolf from the door" she took in paid work as an illustrator for school journals and as a commercial artist.

"Her parents twice bought her houses to live in which allowed her to continue as a fulltime artist."

Despite that, she worked extremely hard as a painter.

"She was very determined and conscientious."

Angus also believed very strongly that her work would be important in the future so she did not sell her best works. That strength and belief in her work is what makes her a great inspiration for young artists today, Bisley says.

But that conviction led to hardship that in turn resulted in Lilburn paying for her to go to Central Otago.

"It was a generous and loving act of friendship and a real joyous thing for her."