Maggie Covell (centre) works with Linda Cook (left) and Sabrina Lu of Dunedin creating art work at one of her workshops.PHOTO: CHRISTINE O’CONNOR
Dunedin art student Maggie Covell’s social art practice project Hidden in Plain Sight is coming to a close with a pop-up exhibition and showcase. Covell tells Rebecca Fox how the project has gone.

The vandals who damaged Maggie Covell’s art billboards and posters in public parks ensured her message reached larger audiences than it might have done otherwise.

Her billboards and posters — featuring wallpaper she designed with abstract images referencing mass-produced objects, trauma and history around being female — ended up being damaged three times while they were up in the Otago Museum Reserve and at the Oval.

‘‘Thanks to them it got media attention. It’s hilarious, they just didn’t get it.’’

Not only did it garner media attention, viewers became ‘‘really outraged’’ on Covell’s behalf.

Overall, 1200 people scanned the QR codes on the posters seeking more information on the project and 25% went back more than once. Her social media accounts linked to the project also had increased traffic and 50 signed up to Covell’s online newsletter. 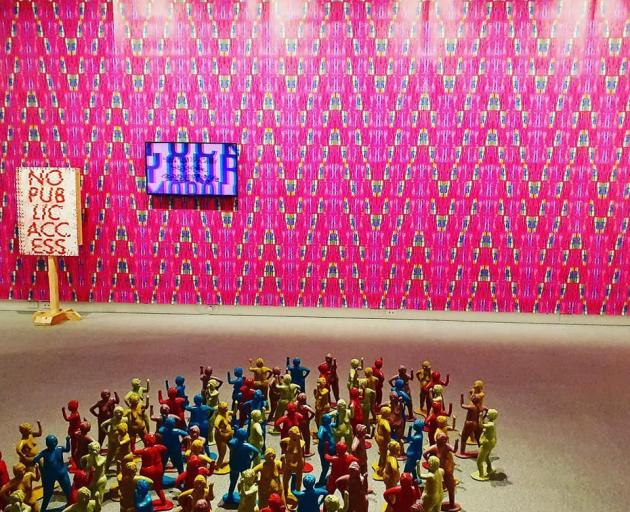 Her Boosted campaign reached 110%, raising more than $1000 towards the workshops and showcase, supporters ranging from friends and family to businesses and complete strangers.

Unfortunately, Covid-19 restrictions meant the numbers have not been able to be translated into the workshops she has been holding, enabling people to get creative and make their own posters and slogans.

She has also received sponsorship from local business for printing and supplies.

In amongst it all she has been re-working elements of the project to take part in a group exhibition, ‘‘Configure’’, at Ashburton Art Gallery.

She is one of seven Dunedin-based artists — Kiri Mitchell, Sarah Baird, Kylie Norton, Tamara Nicholson and Michele Beevors — whose work for the exhibition explores feminism and feminist artwork.

Covell’s installation features one of her billboard wallpaper patterns, printed about 3.6m high and 8.6m wide, hung on the wall and, in front of it, nine of her signs from the project.

‘‘The wallpaper looks beautiful but has this underlying menacing message about body autonomy and mental health.’’

Alongside, a large screen projects a video work of her wallpaper designs and a collection of phrases used in relation to females that are tied into their mental health, such as ‘‘be a good girl’’ or ‘‘you’re too loud’’.

‘‘It’s been interesting to put it all together. It seems no matter what females do, they never measure up.’’

While initially nervous about exhibiting it in a public gallery, given the nature of some of the language, she found the gallery really supportive.

It has also taken the project in a completely different direction to that initially envisaged.

‘‘A whole new audience will now be exposed to the project. It’ll be interesting to see the public’s reaction.’’ 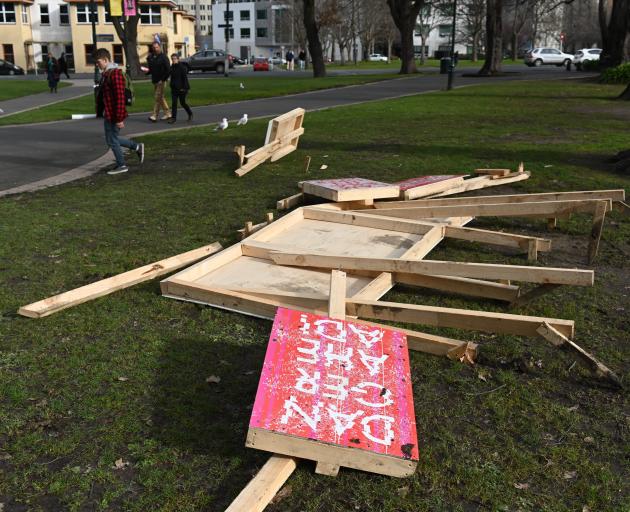 The vandalised art work at Dunedin’s Museum Reserve.PHOTO: LINDA ROBERTSON
Back in Dunedin, workshops have continued, people finding the experience quite ‘‘de-stressing’’.

Covell deliberately made activities that could be replicated in different places, including at home.

House paint is being used and newsprint and Covell made stencils of comments contributed online that participants could use.

‘‘Then they can use a roller brush over them.’’

The project will culminate in a showcase in which a collective of musicians will perform among the exhibition works in Princes St. Chris ‘‘Bugs’’ Miller (The Entire Alphabet, The Something Quartet, Alizarin Lizard and Coin Laundry) is composing and leading the music for the project and will be joined by musicians Ayumu Kobayashi (Akoba, Glad Rabbit ), Benjamin Sargeant (Ha the Unclear, Biff Merchants), Lucy Oliver (Secret Cousins) and Samdrub Dawa (For the Quail).

‘‘It will be interesting to view the music and visuals together. It’s a real unknown at this stage, which makes it more interesting.’’

Overall, people have been really positive about the project, Covell says.

‘‘It shows there can be a positive side to social media, that it can be a good thing.’’

Still at the beginning of her master of fine arts degree, Covell will need to sit down and ‘‘unpack’’ all she has discovered during the project when it is completed at the end of the month.