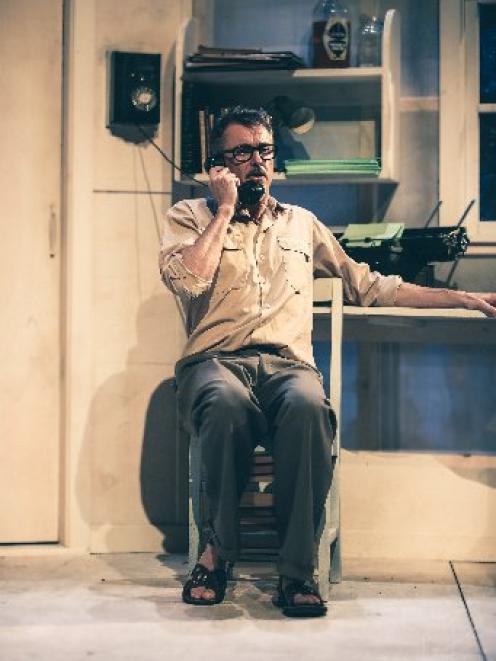 Andrew Laing as Frank Sargeson in the Conrad Newport-directed Gifted, which opens at the Fortune Theatre on September 14. Photo by Jake Metzger.
We have a hunger for being told our own stories, according to theatre director Conrad Newport. He tells Charmian Smith about Gifted, a play about two of New Zealand's leading literary figures that reimagines a famous literary friendship.

Frank Sergeson was a pioneer in telling New Zealand stories to New Zealanders, Conrad Newport says. He has directed the Fortune Theatre's world premiere of Gifted, which opened at the Christchurch arts festival, then played at the Taranaki arts festival and comes home to open at the Fortune on September 14, before touring Otago and Southland.

Rewritten for the stage by Patrick Evans from his 2010 novel Gifted, the play is presented as a Frank Sargeson yarn about 16 months in 1955 and 1956 when Janet Frame stayed in the army hut in his garden.

''The idea is he's the father of the nation's fiction and here's a young writer arriving and he's trying to teach her how to write in his way and she resists in very odd ways,'' Newport said.

''It's a paean to her, a love song on Frank's behalf. Indeed, she ends up being a magical mystery woman whose whole world evolves round language, which is what her novels were like.

''It's a clever mingling of Janet's style and Frank's style of writing in the characterisation.

"It's all about the magic of language and the power of words - that's Frank's journey in the novel and the play - will he or won't he work out what Janet's trying to tell him?''

Newport first came across the playscript while he was working on Rita and Douglas, about painter Rita Angus and her relationship with composer Douglas Lilburn, which, even after three years, is still revived for festivals. Not that it was a similar piece, but it was similar territory, working with New Zealand cultural pioneers, he said.

He read the script, loved it and contacted the playwright, Dr Evans, of the English department at Canterbury University, author of The Penguin History of New Zealand Literature among other books, novels and plays, and an expert on Frame and Sargeson. With Evans' approval he reworked the script to make it more stage-friendly, Newport said.

''There's something really beautiful about the characters and they just came off the page into my head and I could visualise it straight away. I had instant rapport with it and the magic was so wonderful - those moments don't happen often in theatre.

"This is about something really important and beautiful, about big subjects but the characters are so human, it works.''

While the book has many characters, the play has three: Sargeson the narrator, Frame, and Harry Doyle, an old friend of Sargeson's who turns up and disappears as the whim takes him.

The set encompasses Frank's small house and garden behind his famous hedge in Esmonde Rd, in Takapuna, Auckland.

''We have a magical hedge which is integral to the plot. It's magical realism in lots of ways. We play it naturalistically but all these magical things happen that are inexplicable and it's all to do with Janet Frame.

"She keeps saying the words make the things, which is really important in the novel and the play. In the play people say things and they all happen, good and bad - it's all about the magic power of language.''

While based on a real incident - Frame spent 16 months staying and working in the army hut in Sargeson's garden in the mid-1950s - the book and the play are fiction, and the truth is bent for dramatic purposes, he says.

''The theatre public really want to hear our stories and it's wonderful because they belong to us. People should have many versions of these people.''

Although it states clearly in the novel that it is a work of fiction, there was some controversy when it was published, particularly objections from the Janet Frame Literary Trust, which also objected to the play.

Lara Macgregor, artistic director of the Fortune Theatre, says the theatre is not engaging with the controversy.

''You know in theatre we are always depicting people from history. Only a couple of years ago I directed a play On the Rocks by Amy Rosenthal, with Katherine Mansfield, Middleton Murry, D. H. Lawrence and Frieda Lawrence, and there was not one ounce of controversy. Again it was a reimagined moment of what it might have been like when the four of them lived in Cornwall together at the time.

''This is very similar. The beauty of this piece is it's such a celebration of two of our iconic writers and it only shines light on these two people. There's nothing but beauty and poetry and a huge love, an amazing use of language. What's imagined and what's not is so blurred and melded in together.''

She is fascinated by the power relationships in the play.

''Frank starts out as the authority figure. He's been deemed the literary father of the nation and it's a big title to uphold.

"As their time together begins, he loses his footing somewhat, and loses his power and Janet has the power in the relationship.

"It's her mystery, it's her sense, the way she looks at the world, this woman who is 30 years old - actually she's a girl, the way she comes across. There's such a sense of mystery and wonder about her.''

Sargeson starts to become afraid of her when someone mentions her supposed schizophrenia. Then he realises she is not mad or crazy but a writer and needs to write, she said.

Before the cast and director left for the Christchurch arts festival, Macgregor watched a run-through.

''The moment, particularly for me, that Sophie [Hambleton] walked out of that hut and stood there I was very moved because I felt it was Janet Frame and I never knew Janet.

"And you interpret that through the things you have read of her and by her and the iconic images we've seen of her on her dust-covers but also in An Angel at my Table: the icon has become her over the years.''

It was a challenge for actors who play people who were once alive, as opposed to characters drawn out of thin air. Andrew Laing, who plays Sargeson, and Sophie Hambleton, who plays Frame, had studied videos of their characters to be more truthful in their portrayals, she said.