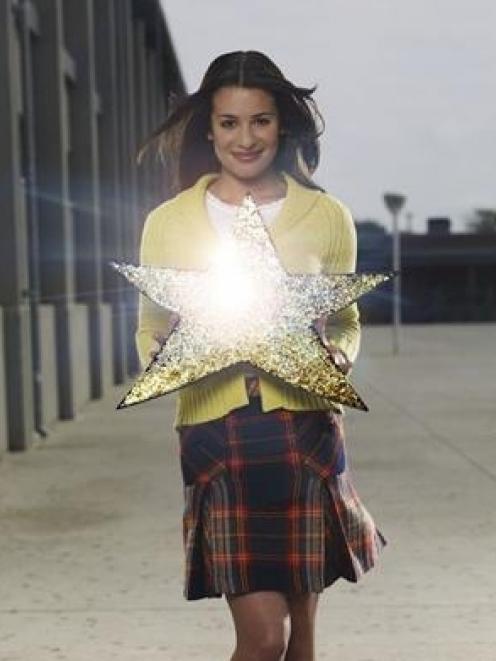 Q: You've done a lot of theatre. Are you learning to act on camera?

A: I was kind of just thrown into this - this is one of the first television jobs I've ever had. Of course, being able to sing helps bring a sense of comfort.

The character I'm playing is really outgoing - she performs in her everyday life as though she's performing in front of a huge audience.

Q: Do you think Rachel Berry is the type of person who's in high schools everywhere?

A: I was very much like Rachel when I was in high school.

I so appreciate her confidence, who she is and what she wants.

I think that it's so possible in high school for kids to get caught up in what people think is cool, and what I love about Rachel is that she knows what she wants, and she's sticking with that.

Q: How do you imagine Rachel when she was younger?

A: Well. Rachel was raised by two gay men in Ohio, and I think that she grew up watching a lot of classic movies - Funny Girl and Cabaret, West Side Story - I definitely think that she was very much like me as a child, talking at a very young age and always putting on shows in her living room. . .

Her fathers have taught her to be proud of who she is and comfortable in her own skin.

Q: Were you ever in a glee club?

A: I wasn't. I was in choir in school. I kind of just did it. I already knew I wanted to sing.

My music programme in my school wasn't really great - people didn't really want to be part of the choir, they didn't want to do the plays and stuff like that.

It definitely wasn't the cool thing to do.

Q: Do you have an ideal musical role?

A: I want to be in Funny Girl. And I want (Glee creator) Ryan Murphy to direct it.

Q: Would you do it on Broadway?

A: I would do it in a basement in Brooklyn, if somebody would let me do it! It's the best role ever - any Jewish girl would want to play Fanny Brice!

Q: Do you remember the first song you ever sang?

A: The first song I ever sang was in the audition of the first job that I ever got.

A: . . . ever sung! Like, literally I had never sung before, and I went on an audition for Les Mis on Broadway - there was an open call in my home town.

And I just thought it was fun 'cause my friend was doing it, so I was like, 'Eh! I'll do it, too!' And I was a really outgoing, funny kid, so I was just like 'Yeah! What the heck!' And the only Broadway musical I'd ever seen, I'd gone to a week earlier - it was Phantom of the Opera.

I was mesmerised - I remember sitting on the edge of my seat, like, loving it.

I listened to the CD at home, and I was able to pick up the sounds and learn the song, and I was in the audition room and the first song I ever sang was Angel of Music, and I haven't stopped singing since.