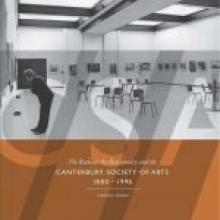 The title is The Radical, the Reactionary and the Canterbury Society of Arts and the author manages to justify the two adjectives. The CSA was a northern counterpart of the Otago Art Society.

The latter was conceived in 1875 and formed in 1876, so is four years older - the CSA used the OAS constitution and laws as its model.

The first sentence of Feeney's introduction reads: "For almost 100 years the Canterbury Society of Arts (CSA) was the most influential and dynamic art society in New Zealand." This could well be challenged by our local society. In the 19th century the OAS under the guidance of W.M. Hodgkins (Frances' father) was certainly pre-eminent and it continued to play a very strong role in the development of some of the country's artistic talent.

The author must be forgiven, however, for he goes on to strongly question "why the story of New Zealand's art societies, and the CSA in particular, remained invisible in the country's cultural history until now?"

It was after an inaugural survey of the arts by Internal Affairs in 1940 that Dr A.H. McLintock noted in the department's exhibition catalogue that the nation's art schools and societies played a role in cultural development and education. He also saw art societies holding an important role for the future. Yet from the late 1950s, histories of New Zealand art typically described art societies as conservative organisations, obstructing the development of the arts and the work of young contemporary artists.

Feeney mentions the way such stereotypes became predominant among historians and commentators.

The notion that the art society was an institution dominated by elderly, conservative members was reaffirmed in numerous surveys. The societies' collection policies have also been criticised - the author details the rumpus in Christchurch, 1947-51, over Frances Hodgkins' modernist painting The Pleasure Garden that CSA argued against buying.

But in chapters headed "Doing the Right Thing 1943-69", "The New CSA Gallery: A Very Swinging Place 1960-75", "A Curious Vitality 1976-87", and also in the concluding "The Stronghold of Canterbury Art 1882-1980" Feeney gives detailed positive information, supplemented with colour and monochrome plates of fine art linked to the CSA, to support praise of the CSA.

The society progressed from a gallery in Armagh St to redevelopment in Gloucester St in 1968. It also built up a collection of artworks, a large portion of which was loaned to the city's Robert McDougall Art Gallery.

The chapter "Wounded Animal 1987-96" outlines financial problems that forced the CSA into selling 42 artworks to the Civic Art Gallery Trust.

The CSA in 1995 had been operating at a loss for the previous six years and eaten into its cash reserves.

But its spirit was not broken; in 1995 it restructured into the Centre of Contemporary Art (Coca), which has gained an uncompromising reputation for being avante-garde.

It is a shame that this history, so comprehensive even down to appended lists of all councils and members of the CSA, ends abruptly at 1996.

Feeney was Coca's director from 1999 to 2010 so would have been well-qualified to cover the missing period. But the book does not examine the story of the new persona - apart from a February 2011 "Postscript" stating the earthquake forced the Canterbury Society of Arts Charitable Trust to close Coca. The trustees noted that the past two years' economic recession had placed the gallery in a difficult position, but vowed that it had a "significant part to play in Christchurch's rebuild."

The spirit of Canterbury artists shining through the book is admirable.

This splendid book should remind local readers that the Otago Art Society had its own regeneration in the 1960s when Shona McFarlane and others secured the former Dunedin North Post Office for its headquarters - yet it outgrew this and successfully rejuvenated itself by the move nearly four years ago to the Dunedin Railway Station.

Art societies throughout New Zealand will hopefully continue their proud histories of fostering the arts in all forms, conservative and modern.

- Geoff Adams is a past president and life member of the Otago Art Society.