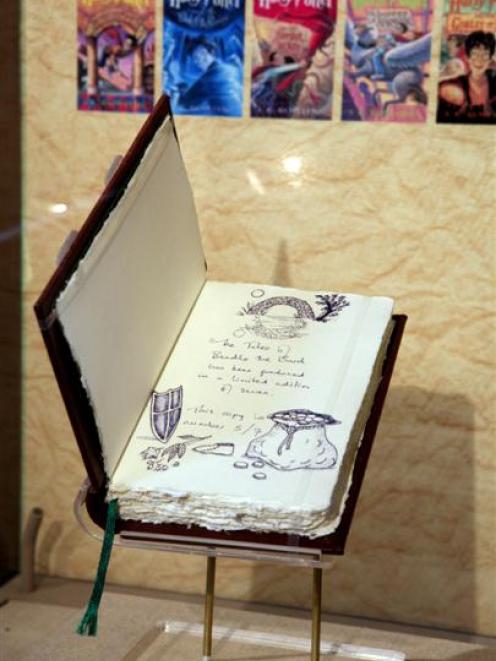 One of only seven original copies of "The Tales of Beedle the Bard," created, handwritten and illustrated by J.K. Rowling, is unveiled yesterday at the New York Public Library. (AP Photo/Diane Bondareff, Scholastic)
Recession-hit booksellers are hoping for a magical boost from a new book by Harry Potter author J.K. Rowling.

"The Tales of Beedle the Bard," a collection of five fables mentioned in Rowling's saga about the boy wizard, is being published around the world tomorrow with only a fraction of the carnival-like fanfare that greeted the Potter novels.

But expectations are high for the new book, which has a global print run of 8 million copies.

"We expect it will crash straight in at No. 1 in our book charts," Jon Howells, of Britain's Waterstone's book store chain, said yesterday. "It would take a battle of magical proportions to dislodge it before Christmas."

The book's print run sounds enormous until you compare it with the Potter books. The final volume, "Harry Potter and the Deathly Hallows" sold 8 million copies in its first 24 hours and had a print run of 12 million in the U.S. alone.

Retailers are not expecting the new book to generate the frenzy that accompanied publication of "Deathly Hallows" in July 2007, when fans dressed as witches and warlocks formed festive crowds outside book stores around the world.

But the day before publication, "Beedle the Bard" was ranked No. 1 on Amazon's British and U.S. Web sites. The Internet retailer is printing 100,000 copies of a leather-bound collectors' edition priced at 50 pounds, or $100 in the United States, and expects them to sell out.

The branch of Borders in central London's Oxford Street was opening at midnight Wednesday, promising magicians and Potter-themed quizzes.

Waterstone's flagship store in central London also was holding a midnight party for 400 ticket-buying readers from as far away as North America and New Zealand.

Rowling was launching the book Thursday with a tea party for local school children at the National Library of Scotland in Edinburgh, where she lives.

Rowling is donating her royalties to the Children's High Level Group, a charity she co-founded to support institutionalized children in Eastern Europe. The book is published on behalf of the charity by Harry Potter's traditional publishers - Scholastic in North America and Bloomsbury elsewhere.

Rowling has said she hopes the book will "not only be a welcome present to Harry Potter fans, but an opportunity to give these abandoned children a voice."

Rowling, whose Harry Potter books have sold more than 400 million copies and been translated into 67 languages, wrote the Beedle tales after finishing "Deathly Hallows" last year.

One of the stories, "The Tale Of The Three Brothers," is recounted in "Deathly Hallows," in which the storybook helps Harry and his friends defeat evil Lord Voldemort.

The other tales are "The Fountain of Fair Fortune," ''The Warlock's Hairy Heart," ''The Wizard and the Hopping Pot" and "Babbitty Rabbitty and Her Cackling Stump."

Rowling has described "The Tales of Beedle the Bard" as a distillation of the themes found in the Harry Potter books, calling it her goodbye to a world she lived in for 17 years.

The book was initially produced last year in an edition of seven handwritten copies. Six were given away by Rowling as gifts, and one was bought by Amazon at an auction for almost 2 million pounds ($3 million).