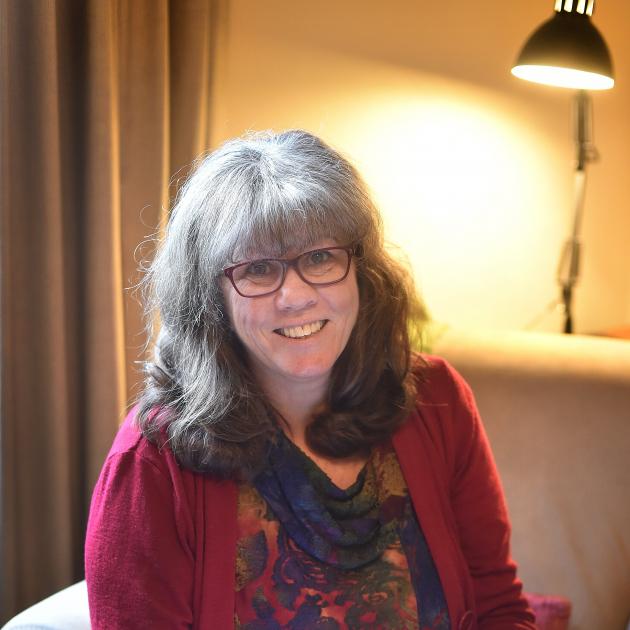 Heather McQuillan signed the Robert Lord Cottage guest book at the end of her time as the University of Otago College of Education/Creative New Zealand children’s writer in residence. PHOTO: CHRISTINE O’CONNOR
It is the gift of time to hone their craft that most University of Otago fellows appreciate the most, and Heather McQuillan is no exception. The children’s writer in residence talks to   Rebecca Fox about losing track of time.

After getting out of bed in the morning, the first thing Heather McQuillan does is sit down to write.

Overnight, the solutions to yesterday’s writing problems have become apparent and she feels the need to quickly record them.

Quite often, she will go to have breakfast and discover it is lunchtime.

‘‘Time just disappeared. I lost sense of my body, I was so absorbed in what I was doing.’’

This unimpeded time to just write is a rare opportunity for McQuillan, but one provided by the University of Otago College of Education and Creative New Zealand.

For six months this year, it was her routine — a break from her job as the director at Write On School for Young Writers, and as a mother of two boys, as well as daily life at home in Sumner, Christchurch, juggling those things around her writing.

Not that it was an easy decision to leave all that behind, but the lure of writing fulltime was too great — especially as she had the beginnings of a story nagging away at her to be written.

‘‘I find it really hard in my normal life to try and dedicate time to write, so my writing happens in bursts, a little bit here and a little bit there. It takes a very long time to get done, particularly a novel.’’

So the fellowship was a ‘‘gift of time’’ to be able to put everything else aside and a ‘‘blessing’’ to a busy writer.

‘‘So I could think my job today is writing, that was a very useful thought to have, that when I wake up each morning it was to write.’’

McQuillan is most known for her books for young people but is also an enthusiastic flash fiction writer (a story between six and 1000 words).

While in Dunedin she concentrated on writing the novel she had been brewing in the back of her mind about two 11- or 12-year-olds who have a tricky friendship which begins to unravel — ‘‘it’s funny and sad’’.

‘‘It had been developing in my head but I wasn’t certain where it was going to go or how it would unfold. I wanted to make sure this character who is quite troubled was also loveable.’’

At one point she did find herself becoming overcritical of her work and having to remind herself the child’s perspective was what counted.

‘‘I stopped thinking from a child’s perspective and thinking what other people would think of it. So I had to put it away for a week, as I was coming at it from the wrong mindset.’’

The time at the Robert Lord Cottage enabled her to get the novel to the point where it has been through its first reader, she has made changes and now put it away to let it ‘‘sit’’ for a couple of months.

‘‘I’ll give it one more go through and then send the manuscript away for assessment.’’

She also finished a sequel, Avis and the Call of the Kraken, to her third novel Avis and the Promise of Dragons, released in 2019.

‘‘I’m hopeful it’ll go ahead but I may have to look at self-publishing, but that is far more of a project that I have time for.’’ 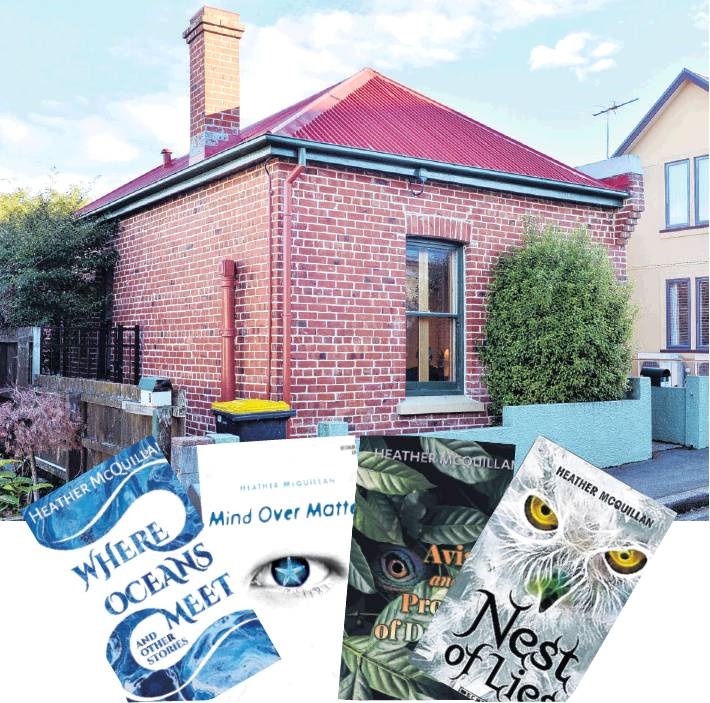 While the fellowship provided her with a ‘‘beautiful’’ office to use at the University of Otago with a garden outlook, McQuillan found the cottage served her purposes to write in the best.

‘‘It was a dilemma at the start of the residency, but it allowed me to get up and start writing. So I’d write in the morning and early afternoon.’’

When the time came for McQuillan to head home to Sumner, she was ready.

‘‘It did get a bit lonely. Six months is a little bit long to be away from home and family, especially when the weather got colder and grey.’’

She also came to miss the wide open views of the hills and sea she gets from her writing loft in the roof of the family home.

It is quite a contrast from the worker’s cottage, built in 1909, with its small windows and urban views. Although she used to enjoy opening the window to let the summer sun in.

‘‘You’d hear people’s conversations. They’d often sit on the fence and have conversations. You felt a little like a spy, as they weren’t aware of me being there.’’

Those conversations were also a window into student life.

‘‘It’s not what I’m used to at all. It’s a writer’s thing to do, I suppose, to observe things from their environment. I’m sure a little of those conversations and observances will come out in my short stories.’’

She is now working on a collection of flash fiction, with the stories connecting and interweaving throughout the novella which is due in December-January.

‘‘I like working to deadlines. It means I have to get a move on.’’

While McQuillan has always written — ‘‘terrible’’ poetry in her student days — teaching was her first love. She left school as a 16-year-old after gaining early entry to teachers’ college.

As a classroom teacher she taught mostly 11 to 13-year-olds, and it is that age group she likes to write for as she feels she has a grasp on their likes and dislikes.

‘‘I spent so much time with young people, I loved reading young people’s books. I read a lot of their material and my son’s reading too.’’

At that age, young people are transforming physically, cognitively and ethically, she says.

‘‘They start to see well beyond themselves and their families and begin the search for where and how they will fit in this, now, much wider world. Self and social identity become key drivers in the choices they make. I’ve always found this age group particularly fascinating with their fresh perspectives and challenging questions. I also remember my intermediate school years with greater clarity than the years on either side.”

As she is no longer classroom teaching, she gets advice from those she works with now in that age bracket about the latest slang words and internet usage to ensure her books are relevant.

‘‘I have a bank of young readers and writers I can got and get advice from.’’

It was not until she took a year away from classroom teaching to work as an adviser for the arts curriculum that she had the ‘‘freedom and head space'' to get stuck into her writing.

‘‘My first novel had to be written. It was one of those stories that was just there so I wrote it and submitted it not having any idea what to do. Now I think about it, it was a terribly rough manuscript, but I submitted it to a competition and it won.’’

She learnt she had written way too much — basically two books’ worth — so had to learn the skills of redrafting and editing.

‘‘I had got really good at cutting back — that is what led me to flash fiction.’’

The time came when she did not have the time to write, so went along to a poetry workshop held by poet and novelist James Norcliffe who suggested she try writing flash fiction after she complained that all of her poems ended up as stories.

This led to her to complete her master’s in creative writing on the flash fiction genre as a writing style. Back then, it had not really taken off in New Zealand, and people were having to advocate for it as a meaningful method of expression, ‘‘not just something middle-aged people do on the internet’’.

‘‘It’s now more accepted and it is developing as people experiment.’’

McQuillan loves the genre, as it allows her to get the bones of a story down on paper quickly and get meaning into it.

‘‘I love that crafting, crafting sentence by sentence to give that tension in a story that is just 300 words long — you can’t give that attention to 50,000 words. It’s a bit like a cryptic puzzle.’’

These days she mixes her writing with her teaching 7 to 18-year-olds creative writing through Saturday morning and specialised classes and in-school workshops.

‘‘It’s a delight to look at their work. Prompting them to think differently. The idea is to bring out their voice. It’s very different to the way I was supposed to teach at school.’’

She aims to help young people get their ideas and thoughts down and then helping them shape it so other people can read and understand what they are trying to say.

Write On also published a magazine twice a year which included articles, reviews and children’s writing from workshops and open submissions.

‘‘It’s a joy to put together. To see the kids read their pieces out and then hold that magazine close to their chest is a thrill to see.’’

McQuillan is a big fan of children reading books by New Zealand authors, as she believes it is important for them to be able to see themselves in what they are reading.

No matter at what age people take to writing, it requires work and support and assistance from groups like the New Zealand Society of Authors, she says.

‘‘You can have really good ideas but you also have to work on your craft. Read what’s out there at the moment of whatever age group you want to write for. You don’t have to write like that, in fact you shouldn’t write that way because it’s already there. But look at the craft.’’

She also cautions against thinking writing for children is easy.

‘‘It’s a real challenge. There is a lot you have to think about that you don’t with adults. Obviously, there is the vocabulary, they have to be able to understand. You also need to hit points early to keep them reading. You have to make characters compelling enough otherwise they’ll put the book down.’’