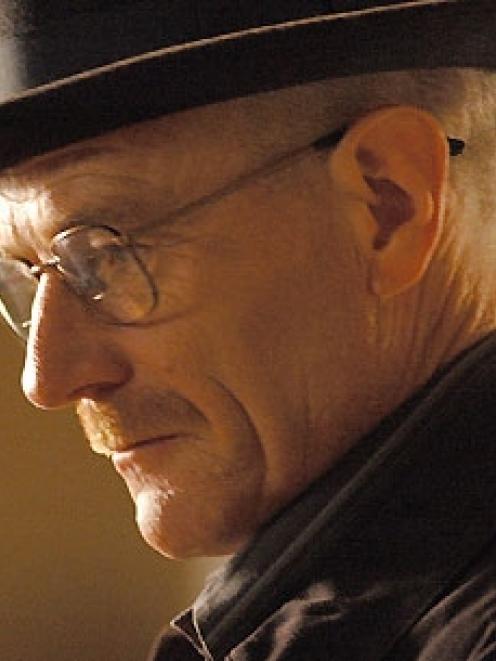 Bryan Cranston as 'Breaking Bad's' Walter White. Photo by AP.
A few months ago, I found myself in the middle of a rather surprising debate over the merits of Breaking Bad, which opens its second season on C4 on Monday night.

The folks involved were critics, scholars, writers, producers and other representatives of the generally mouthy and highly-opinionated.

Bryan Cranston won an Emmy for his portrayal of Walter White, a mild-mannered chemistry teacher who, upon learning he has terminal cancer, becomes a master chef of methamphetamine in order to bequeath his family a measure of financial security.

Although the writers' strike limited its first season to seven episodes, Breaking Bad received all manner of accolades and awards.

But what bothered some was the show's message: that a desperate Everyman could find his true calling, his manhood, by manufacturing Grade-A meth.

Yes, the idea of a science geek going street was blackly hilarious and Cranston's Walter was so beset and struggling that your heart went out to him.

But were we really supposed to root for a guy who, a few episodes in, turned down a perfectly good job offer because it stung his pride, only to seek salvation through such a terrible drug?

Weren't we tired of the idea that crime is empowering (and an aphrodisiac), especially for those who once considered themselves nice guys?

Wasn't it time we stopped celebrating the Bad Boy, stopped making it seem like life on the edge is the only one worth living?

What can I say? It happens.

Especially these days when some of the best stories on television involve a rogues' gallery of transgressive "heroes" - crooked cops, mobsters, adulterers, serial killers, prostitutes, drug addicts - many of whom treat their pathologies with a wink and a smile or a persuasive voice-over.

Going to extremes is the order of the day - marriage is dissected through polygamy on Big Love, multiple-personality motherhood is portrayed as cool on United States of Tara and House is still mean, drug-addicted and reckless.

White isn't the only second-career drug dealer in town - Weeds' Nancy Botwin is getting spanked by a Mexican drug lord.

So why set your hair on fire over crystal meth?

Because Breaking Bad is set-your-hair-on-fire television, that's why.

And because what makes it such a powerful show also makes it a disturbing show, as the second season seems bent on proving.

Smart but never slick, funny but never glib, dark but never noir, Breaking Bad is actually not another addition to the Brotherhood of the Made Guy formula; it turns out to be the formula's antidote.

And if people like me weren't wondering, "Wow, how far is too far, and is seeing the mushy grit of a chemically dissolved human being scooped up and thrown in a trash bag maybe it?" then Breaking Bad wouldn't be the show it is.

It was difficult not to watch the first season in a state of perpetual flinch.

He was so lost and clueless as he invited evil into his life, thinking he could control it with math and attention to detail, just as if he had never met a drug addict before or even seen Fargo.

His former student turned sidekick Jesse (Aaron Paul) was such a twitching, fried-brainstem mess you could practically smell him - the flop sweat, the ashtray funk of his clothes, the chemical film on his skin.

In comparison, Walter's wife Skylar (Anna Gunn) and son (R. J. Mitte) were so soapy clean, so lovely and irritatingly real that the viewer felt complicit in their betrayal as we watched Walter dance with the devil.

In the second season, things are trending away from the humour in the situation.

Having seen first-hand what his super-meth can do - after snorting some, drug dealer Tuco beats one of his men to a bloody pulp - Walter's swagger of newly awakened machismo is gone, replaced with something much grimmer that appears to be consuming him as quickly as the cancer.

This man is not finding his inner gangster; he's selling his soul, right before our eyes, and it is no longer going unnoticed either by him or his family.

The Drug Enforcement Administration brother-in-law is still a blowhard, but he's a brave blowhard who understands what's at stake.

Still, we don't want Walter to get caught.

Because when you willingly enter a world where murder is the cost of doing business, there really is no going back.

As the second season seems intent on proving, it is impossible for a non-sociopath to lead two distinct and morally opposing lives, despite what some of our favourite movies and television shows would have us believe.

Whatever is at the centre of Walter White must either take a stand or give way - which will be something worth watching and, perhaps, even rooting for.

• The second season of Breaking Bad premieres on Monday, December 14.