A critic on TV 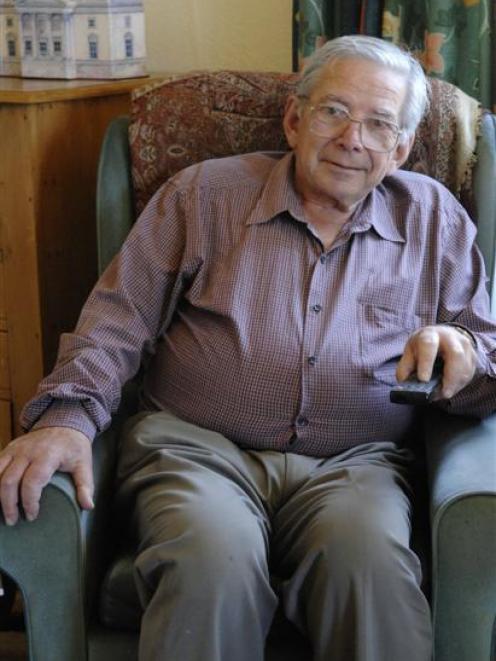 Keith Harrison
He's been staring at the box for more than 30 years. But now Otago Daily Times television reviewer Keith Harrison is hanging up his remote. Nigel Benson talks moving pictures with the venerable critic.

An old Sanyo television set hides in a wall unit in Keith Harrison's study. A large comfortable chair faces it.

Many a television programme has been hoist on this petard.

"It's an old one. I'm a bit ashamed of it," Harrison chuckles with good humour.

"The TV sits in the cupboard because I don't like seeing the screen with nothing on it. It looks kind of obscene, somehow."

Harrison (76) became involved in television reviewing through his role as a theatre critic in 1975.

"Television appeared to herald a whole new age, when it arrived. But it didn't really live up to its early promise," he muses.

"It should stimulate the mind and challenge the intellect. But, I don't know that it always achieves that.

"I remember my son, Richard, being a real Dr Who addict and people frowning on that, because it was such a violent programme. Things have certainly changed.

"TV wasn't on as long then and you had clearly-defined children's and adults' times. "TV in its earlier days offered a lot. But society has changed.

"Nowadays it's about reality TV, with people in real situations. Viewers don't want to be taken away with a story, except with things like soaps.

"Soaps tell a simple story. You can turn the TV on and look at someone else's problems. It takes away the pressure of our own problems and lives.

"Soaps will always have a place for escapism.

"But when TV first arrived, we thought we were going to get really good programmes," he sighs.

"When you think how we used to stay in for programmes like The Plane Makers and The Forsyte Saga.

"People would say they couldn't go out on a particular night, like on Tuesdays when The Plane Makers was on.

"All that has changed. That's one of the biggest changes I've seen," Harrison says.

"There was often a special theatrical show on Sunday night, too. I think it was fulfilling a need in society and I don't think we've got that today.

"You look at the programme now and there's often nothing on for a whole week. You think: `I may as well just go out and hire a video or something'.

"As a country we are desperately short of shows which air issues which are important in our society.

"The best local effort over the past year has been Agenda," Harrison says.

"It is the only show to have offered serious discussion and comment on the current social and political issues of the day.

"I think one-on-one interviewing is still an attractive part of TV if it is well done. Guyon Espiner on TV One has established that pretty well. I think he's very good.

"John Freeman's Face To Face saw him in silhouette. You never saw him face-on, which was a very interesting technique.

"The best imported programme I've seen was Simon Schama's Power of Art; a reminder that television is still capable of dealing successfully with high culture as well as soaps.

"The worst type of programme is that typified by quiz shows such as The Rich List - poorly presented by an over-exposed Jason Gunn and suffering from third-rate production techniques.

"Programming has moved away from the general purpose of delivering quality drama and documentaries, laced with soaps, to an emphasis on reality-type shows.

"TV is powerful and influential with the viewing public who have not made the effort to think for themselves and make up their own minds about issues.

"It would be easy for an unscrupulous leader to manipulate large numbers of people through the medium of television."

However, he believes TV still does some things well.

"I think the News, when something important is happening, can sometimes be very good.

"TV is good for the immediacy which it offers in news gathering and for encouraging its audience to be involved.

"That is TV at its best. But it's behind radio. Radio does it better.

"TV is bad for glossing over issues, for bowing to the time constraints and, above all, for giving in to the demands of the advertising dollar.

"Without that pressure in this country, the quality of what is on offer would be so much better.

"TV is looking at the image rather than the material. They have to keep their advertisers happy and keep the viewers online.

"I think there's going to be a reaction against polished, beautifully-presented TV. People would rather see warts and all.

"Just get people in the studio and get them talking, That might be the way TV goes."

The industry has observed many changes since Harrison started reviewing in 1975. Widespread use of colour, for one.

"The biggest change. I'd say, has been the appearance of Sky. It's given people more options.

"For the keen sports follower, it offers terrific experiences you can't get on normal TV," he says.

"Cable TV has become an option for almost a third of the population in an effort to recover the range and choice which viewers once had.

"It has allowed and encouraged greater choice with the result that viewers are more sophisticated."

Harrison doesn't have Sky himself.

"I find enough on BBC World to keep me interested. If I found that changing I might join up."

The television industry has a love/hate relationship with reviewers.

"There are those who have a good understanding of the industry and whose opinions offer us valuable feedback; there are also those like the one who once confessed to me that his newspaper had just arbitrarily allocated him the job of television critic, but in fact he hardly ever watched TV, because he didn't own one."

"I think it's wise for programmers to pay attention to critics, since the best television critics speak on behalf of the audience as a whole," she said.

"And, from the audiences point of view, a really good critic can bring insights that make you appreciate new aspects of a programme, or understand where it fell short of greatness."

Harrison will still be watching television, but not as much of it.

"I've been commissioned to write a book," he says.

"I can't say what it is at the moment, but it will be a two-year project."

Dr Who: Innovative and imaginative since it began.

The classics
The Plane Makers: quality drama from the 1960s.

NZ Agenda: has grown and developed into a jolly good current affairs show.

Anything by Te Radar. This likeable enough chap tries hard but doesn't get anywhere much.

Likewise Gordon Ramsay (the F-Man), who lacks subtlety, to say the least.