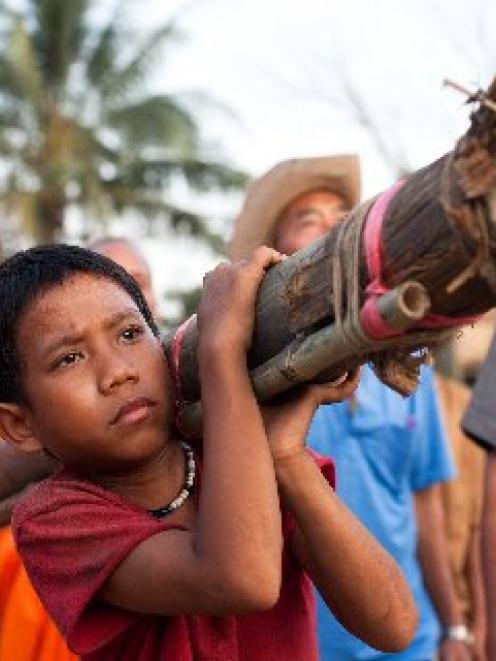 Award-winning Australian film The Rocket is banned in Laos, the country in which it is set.

Which provides an odd symmetry for the story it tells.

Throughout The Rocket, the legacy of the CIA's 1960s secret war inhabits the landscape. Unexploded bombs poke uncomfortably from field and hill like a guilty conscience, providing weight to claims that Laos is the most bombed country on Earth.

The bombs were dropped by the Americans as an extension of the Vietnam War, taking a dreadful civilian toll, in a campaign largely hidden from the US public.

Now a film that exposes that history is again regarded as not for domestic consumption. This time by the Laotian Government.

But not because of the bombs.

The film follows the fortunes and misfortunes of a family shifted from their traditional village to make way for a hydro-electric dam built in a joint venture with Australia.

A cloud of mistrust already hangs over the head of the family's only son, Ahlo, played by prodigiously talented first-timer Sitthiphon Disamoe, who must prove that the mounting bad luck is not his fault.

Australian director Kim Mordaunt says the film has been embraced by Laotian audiences around the world, but not in Laos where the Government has decided it will not screen.

''It is quite tricky because dams are incredibly political in Laos at the moment,'' Mordaunt explains.

''They are worth hundreds and hundreds of millions of dollars. Even though Laos people have seen the film all around the world ... the Laos Government on the other hand have banned the film from Laos as too political. We half expected that would happen.''

The director says the film family's experience of being shifted to a shantytown to make way for development is not atypical of the Laos experience.

When making an earlier documentary in the country, Bomb Harvest, about efforts to clear the American bombs, he and his film-making partner Sylvia Wilczynski came across whole villages emptied to make way for dams.

People were wandering around like lost souls, or had just been dumped somewhere.

And as in the film, sometimes Australia was complicit.

''Laos has hydro, it has gold, it has copper, it has rubber, it has timber, and it is poor.

"So, what happens to poor countries, especially countries made poor by war, which is usually the way it goes, they are open for business because they need business and they are very vulnerable. And we saw multinational corporations just reaping the country. Raping and reaping the country and its resources and Australia was part of that.''

They talked to employees of dams, on the quiet, who confirmed that compensation packages for the displaced were inadequate.

''As we have seen in Australia with indigenous people, just throwing someone a handout and saying `she'll be right' is not good enough,'' he says.

''It is something that is happening globally. Our story is just a microcosm of what's happening all around the whole globe in terms of first world countries' relationships with the Third World.''

Mordaunt and Wilczynski were inspired to make The Rocket following their experience during the making of Bomb Harvest in 2007, which followed an Australian bomb disposal expert's efforts to remove unexploded munitions.

An estimated two million tonnes of bombs were dropped on Laos, a third of which did not detonate.

On average, a B-52 bomber dropped its load every eight minutes, 24 hours a day, between 1964 and 1973, so that more ordnance was unloaded over the small Asian country than was dropped during the whole of World War 2.

By the end of the Vietnam War, there were 80 million unexploded cluster bombs scattered across Laos, only 500,000 of which have been cleared.

''It gives you an idea of what the legacy of war really means,'' Mordaunt says.

''That war very much was a secret war. It went for nine years and a lot of the American public and a lot of the Australian public, we were allies in the war, had no idea that ... Laos, while the Vietnam War was happening, was being bombed more than any other place on the planet.''

Because of the geography of the country, those bombs sometimes remain hidden, sometimes rise to the surface like a bad memory.

''In a place like Laos it is mainly rice paddy, so the ground is soft. Bombs would literally embed themselves into the ground and a lot of them under the ground.

"Then it is a tropical country, you have monsoons there, incredible floods that literally take the top surface off the soil and then guess what you have sitting there. It is something like a fossil.

"You have this bomb that looks like it was dropped yesterday, apart from a bit of rust and there it is alive and full of explosive and sitting there.

''There are some villages we went to while making the documentary where 65 bombs would be found, big bombs.

"Then you would walk to another village and two weeks later you would hear that same village, because of the rains or what people had found trying to garden and grow vegetables, another 15 had been found.''

The shoestring Laotian efforts to clean up provide some hairy moments in The Rocket. One scene finds our family sharing a cart with a load of enormous shells.

Again, Mordaunt says there was no dramatic licence taken. That is exactly as it is done.

''Those carts are just full of bombs and a lot of time, the unfortunate thing is, that especially for people born after the war, they just see it as metal. Big slabs of metal and it is good metal.

"It is terrible that these killing machines were made out of excellent metal. So they literally throw them all into a cart and away they go. And to be honest, those carts blow up sometimes.''

Some of the victims of this dread trade are children, as Mordaunt discovered when making the earlier documentary.

''There was a subnarrative in it which was about the kids who collect the bomb scrap metal and that really was our connection to the kids in Laos and very much the inspiration to want to keep working with them.''

An unexploded cluster bomb looks like an old piece of fruit or a ball, just the sort of thing a child might pick up and play with, he says.

The Rocket is Ahlo's story and Disamoe picked up a best-actor award at the Tribeca Film Festival as a result, but a second Laotian youngster also steals a good many scenes.

Loungnam Kaosainam (9) plays the part of Kia, who becomes an important companion for Ahlo. Together they create some of The Rocket's most magical scenes.

The festivals are something of a national celebration to break the dry season, Mordaunt explains.

''But at the same time it is kind of like this hotpot of crazy ex-military who are kind of shooting back at the sky.

''As well as being an ancient Buddhist festival about bringing rain, bringing the rain which will help grow things and keep everyone alive, it is also this incredible metaphor for its recent war history, where you have people shooting back at the sky, all this dark history being reinvented into something that is very positive, which is the rain. That's what we really loved about it.

''Laos has this ability, and it might be the Buddhism, to sort of break cycles of hatred, to let history go and turn it into something positive.''

The Rocket first screened in New Zealand last year as part of the International Film Festival, and returns this week to the Rialto, in Dunedin.