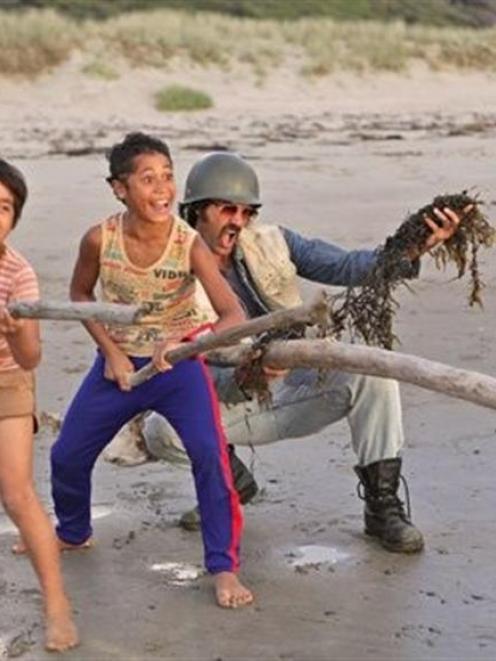 
The thing with Taika Waititi's wildly successful short film, Two Cars, One Night, was that it lasted only 11 minutes. Just long enough to generate a smile, and take a whole lot of us back to pub car parks in the '70s.

So for an extension on that same theme, Waititi once again turns to his roots of growing up in the small East Coast settlement of Waihau Bay.

Seen through the eyes of "Boy" (James Rolleston), an impressionable 11-year-old who spends his days polishing the fantasy of his absent drop-kick dad, Alamein (Waititi), this coming-of-age story is the antithesis of Whale Rider. Boy proves that stories about indigenous New Zealand don't have to be culturally precious.

From Boy's terrifically cast brother Rocky (Te Aho Eketone-Whitu) to his motley band of miscreant school mates, there is plenty to like.

Capitalising on the same sort of Kiwi quirkiness that made Eagle vs Shark a delight, Boy starts off at cracking pace that will have anyone who attempted moon-walking in the '80s rolling in the aisles.

Unfortunately, Boy's raison d'être is also its downfall. Waititi spends far too long revelling in his gags, and not enough time constructing a coherent through-line.

Like a stuck record, as funny as the Billy T. James-isms are, they will wear a little thin after 80 minutes. Nevertheless, Boy meets almost all the criteria to be a cult classic.

Best thing: The Thriller dance sequence during the final credits

Worst thing: The pacing. After the ribs have recovered from the opening salvo of gags, Boy doesn't seem to know where to go next.

See it with: Anyone born in New Zealand in the early to mid-1970s.