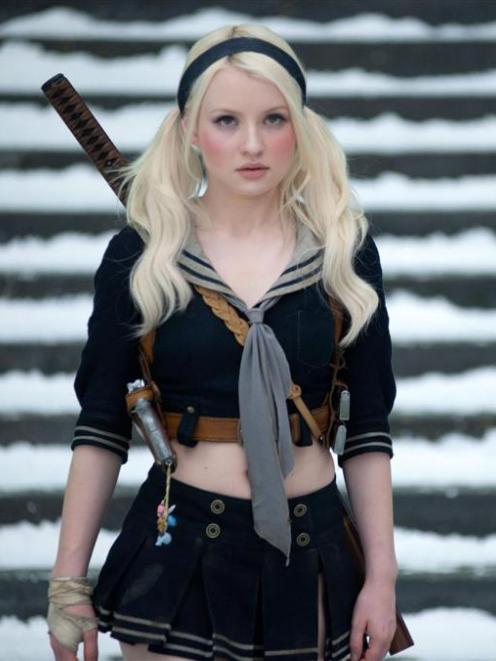 
The first time I saw the Sucker Punch (Rialto and Hoyts) trailer I burst into laughter. The concept of five hot warrior girls trapped in a mental asylum but with full access to the makeup bar struck me as killingly funny. Could that silly premise sustain a full viewing?

Of course director Zack Snyder has proved himself capable of wrangling over-the-top concepts into something watchable, you only have to remember what he did with the Spartans in 300.

Sucker Punch is a story within a story within a story. Baby Doll (Emily Browning) is shut inside a Dickensian loony bin by her abusive stepfather, with a lobotomy booked for five days time. To escape she imagines an alternative, but just as unpleasant, reality where the girls are (wink, wink) "dancehall hostesses".

Then, as she dances, Baby Doll taps into another reality where the costumes are equally skimpy but there are guns and swords and a wise man (Scott Glenn) to send them on missions while channelling Charlie's Angels.

It is a lot to take in. Mostly the plot's continual folding upon itself stays interesting but this is designed for younger, more flexible brains than mine and by the end I was hanging out for a nice hot cocoa and a little nap.

Worst thing: By the fourth dream/action sequence it had just become noise and bluster. It may have been fun to do but it had stopped being fun to watch.

See it with: A continual stream of energy drinks; you will be needing them.