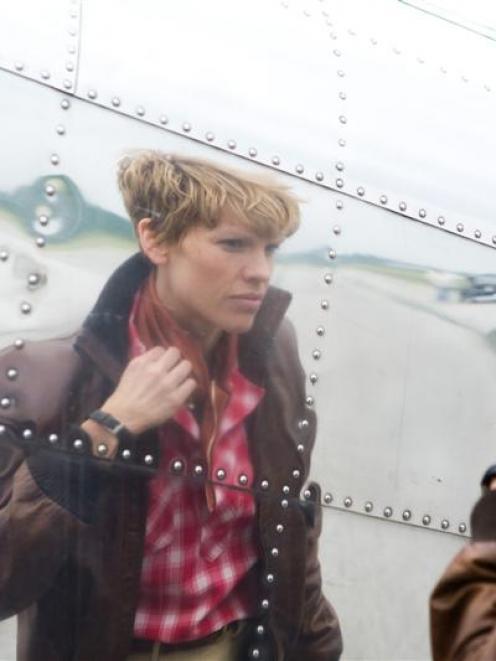 Hilary Swank as Amelia Earhart. Photo from Fox Searchlight Pictures.
The story of Amelia Earhart is taking wing again. Rachel Abramowitz, of the Los Angeles Times looks at where the film-makers went for their facts.

For Hilary Swank, at least one thing about portraying the enigmatic aviator at the centre of the new film Amelia was certain.

"You can't play Amelia Earhart and not learn how to fly," the Oscar-winning actress says with a chortle.

"That would be a huge flaw.

"I'd be fired immediately."

Beyond that, almost everything else about Earhart - who disappeared in 1937 while piloting her Lockheed Electra over the Pacific Ocean, trying to become the first woman to fly around the world - has dissolved into the soft glow of collective oblivion.

The pilot, perhaps the most famous woman in the world in the early 1930s, has become for many people a kind of two-dimensional pop-up icon, a name branded on public works and postage stamps - vaunted for her androgynous style, her lanky figure invariably adorned in breeches and a silk shirt, her hair cropped short.

It's not for nothing that Gap and Apple recycled her image for ad campaigns in the 1990s.

Now comes the first major studio biopic about her, the reverent Amelia, directed by Mira Nair (The Namesake) and starring Swank and Richard Gere as her impresario-husband, George Putnam, who made the one-time settlement house worker a star and later begged her to marry him until she finally acquiesced.

Spearheading and paying for this $US40 million venture was an unlikely source:

Still, parsing the aviator wasn't as easy as just listing her accomplishments.

"The vista we were interested in was the vista of the internal life of Amelia Earhart," says Anna Phelan Hamilton, one of the film's screenwriters.

"Some 28 biographies have been written about her, and after slogging through all of them, there was still this hidden Amelia."

Nicknamed "Lady Lindy" for her resemblance to Charles Lindbergh, Earhart essentially was cast by Putnam - a publisher who specialised in adventure books - to become the first woman to cross the Atlantic in 1928.

Although she was merely a passenger or, as she quipped, "just baggage, like a sack of potatoes", the event sparked a media frenzy and led to her book 20 Hours, 40 Minutes.

Earhart later accumulated authentic achievements of her own, becoming the first woman and second person to fly solo across the Atlantic in 1932.

In 1935, she was the first person to fly solo from Hawaii to California and from Los Angeles to Mexico.

She founded the Ninety-Nines, an organisation for female pilots, and barnstormed the country giving lectures about aviation and exhorting women to break out of their "platitudinous sphere".

In 1935 alone, she gave 136 lectures, reaching about 80,000 people, says Susan Butler, whose Earhart biography was a source for the film.

Fifty years before Madonna, Earhart was also a pioneer in brand management, abetted by Putnam, one of the first uber-agents, who brokered not only her books and publicity but also all sorts of product endorsements, including clothing and luggage lines.

Still, Earhart, a famously private person, lived in the age before TMZ and Oprah.

She left no explanation for why she was driven to fly, then a tremendously dangerous pastime, except to say gaily: "For the fun of it".

Even her closest friends often had little knowledge of her pre-fame life - of her alcoholic father, who introduced her to flight at a California air show and whom she adored, even though he dragged the family around the country because he was unable to sustain a job, or of her patrician mother, whose relatives, according to Butler, tried to control and later steal her inheritance.

"She wanted to be the person she became.

Although privacy might be emotionally healthy for an individual, it can be a challenge for people trying to animate a hero.

Rain Man writer Ron Bass was the first to try, under the aegis of director Phillip Noyce (The Quiet American).

He looked at her love life for insight, in particular an honest but quietly devastating letter she wrote to Putnam on their wedding day in 1931, expressing her reservations about marriage.

"You must know my reluctance to marry, my feelings that I shatter thereby chances in work which means so much to me," Earhart wrote.

"I know there may be compensations, but have no heart to look ahead.

"In our life together I shall not hold you to any medieval code of faithfulness to me, nor shall I consider myself bound to you similarly."

To Bass, Earhart was "someone whose sexual freedom and recklessness is a cover-up, because she's afraid to have a genuine relationship ... She vowed to not live the life her mother lived, and she kept her heart to herself, like the adventurous male."

This vision of Earhart was to some degree abandoned when Noyce was replaced by Nair, who brought on her writer of choice, Hamilton.

"There is a humility about her, but also an enigma," Nair says.

"It was her own writings that really let me in to how she thought, her poems, her turn of phrase, the delight she took in seeing the world."

Nair and Hamilton reconceived Earhart as a kind of modern woman, an adrenaline junkie who was nonetheless rent asunder by the same plight of today's working woman - the uneasy balance between work and family.

In their take, Earhart wasn't initially in love with Putnam but essentially succumbed to his desire for her.

Only later, before her fateful, last journey at 39, Earhart fell in love with her own husband.

It's certainly a plausible option, although not explicitly set out in the historical record.

Nair and Hamilton also simplified the tale, jettisoning, for instance, Putnam's children and first wife, who apparently had her own lover.

"I'm very interested in this idea of the beloved.

"When does the beloved become the lover," Nair says.

Swank, of course, added her own topspin to the on-screen Earhart, another in the actress' growing canon of boyish women, including her Oscar-winning performances in Boys Don't Cry and Million Dollar Baby.

"Amelia epitomises living your life the way you see it," Swank says.

"She's a great inspiration to a lot of people ... certainly women.

"We get so caught up in living for other people, and all of a sudden, life's passed us by. Our dreams are unfulfilled. Amelia reminds us to make no apologies for living your life the way you want."

Learning to fly was revelatory.

"There's not a lot of firsts in life anymore as an adult," Swank says.

"It's hard to find things that are exhilarating."

Still, it was nerve-racking.

"I'm not a big sweater," the actress says, but "when I land a plane, I always have a drenched back from the whole operation".