One for the fans 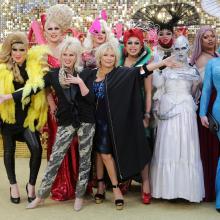 Joanna Lumley and Jennifer Saunders arrive for the world premiere of ''Absolutely Fabulous'' at Leicester Square in London. Photo by Reuters.
I was a bit worried about Absolutely Fabulous: The Movie (Rialto and Readings) because it had the terrible possibility of coming across as an extended cast reunion party that they just happened to have filmed.

However, writer and star Jennifer Saunders has been channelling the eye-watering doings of Eddie Monsoon (Saunders) and Patsy Stone (Joanna Lumley) for almost a quarter of a century and she knows them too well to ever let them become dull.

My normal complaint about comedies is that there are not enough jokes and I noticed that I was not laughing, yet I was still finding it funny.

Part of it was that I was concentrating so hard on taking in every bit of detail, I was saving the laughing for later and the rest is that with characters as rich as these ladies and all their supporting cast, most of the enjoyment comes from seeing another layer of character being added.

This is not a movie for those of you who have never watched Absolutely Fabulous.

You can not come to this without pre-knowledge because it would just look like a train wreck and anyway, if you never watched the television show what are you doing going to the film?

For fans the movie is a real pay-off.

This is Patsy’s film in many ways and Lumley flares her nostrils, juts her chin and goes for it.

No-one, not even Bubbles (Jane Horrocks) or Kate Moss, is going to steal her limelight.