Only some understand stardom matrix 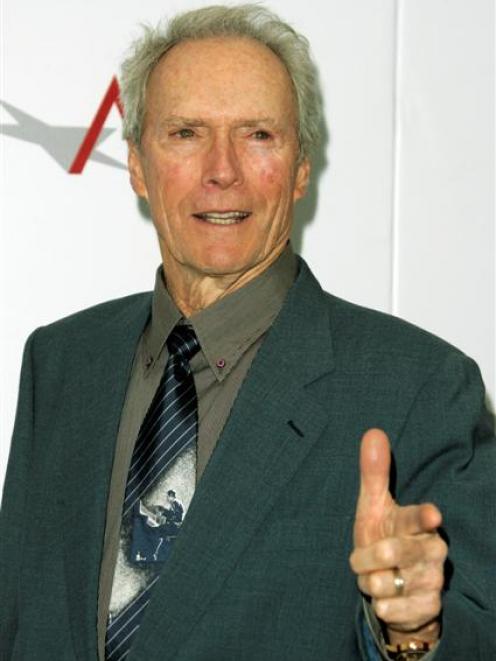 Boldest example of the stardom matrix . . .Clint Eastwood arrives for the American Film Institute awards luncheon in Los Angeles earlier this month.
We are watching a lithe, beautiful assassin packing serious heat and a supreme sense of cool as she teaches a nervous young man how to shoot.

The serenely confident assassin, aptly named Fox, embodies all that is predatory, ruthless and lethally sexy.

But as we watch Fox, the antiheroine of last summer's hyper-violent action flick Wanted, we are also watching Angelina Jolie, whose off-screen persona as humanitarian activist and mother is every bit as strong as the fictional one.

And the ability of viewers to accept those two ideas simultaneously turns out to be crucial to the audience's satisfaction and the film's success.

As Fox ruthlessly dispatches bad guys from screeching cars or speeding trains, it doesn't matter that we might have seen the woman recently playing her speaking at the Council on Foreign Relations or taking her children to school.

Clearly, when it comes to Jolie, we'll take both. Welcome to the matrix of stardom, that mental space we navigate every time we encounter our biggest stars on the screen.

These are stars of mega-wattage, actors who despite their acting talents are long past being able to melt anonymously into their roles.

They are the superstars whose off-screen lives we follow in an ongoing narrative that can be every bit as riveting as their movies.

That ongoing "real-life" narrative forms one of the struts of the stardom matrix, which is propped up by a delicate balance among the stars' off-screen identities, their on-screen characters and the audience's own projections.

Superstars' performances succeed not despite that awareness, but precisely because of it.

(No, this isn't the same as typecasting. The matrix allows for casting against type, often with surprisingly delightful results. And yes, the matrix is like The Matrix, to a point.

The stardom matrix isn't simulated as much as psychological, the hidden code being the almost subliminal way we apprehend sometimes competing, sometimes complementary personas.)

To consider the past year in movies is to behold fascinating, in some cases cautionary examples of the matrix of stardom.

Why did we accept Angelina Jolie in Wanted but not Changeling?

Why did Robert Downey jun triumph when Nicole Kidman failed?

How is Brad Pitt managing his matrix in The Curious Case of Benjamin Button?

How is Clint Eastwood going meta with the matrix in Gran Torino?

And can Tom Cruise's matrix be saved?

The matrix is strongest when the stars' fictional characters harmonise with their off-screen selves that we think we know from their public appearances and interviews.

That's why Jolie's matrix operated so smoothly in Wanted, where her tough on-screen character jibed with the bad-girl persona of her Lara Croft and Billy Bob Thornton days.

Her newer incarnation as a global healer and broody mom only heightened the cartoonish glee of watching her character Fox run amok.

But we didn't buy Changeling, in which Jolie played a real-life woman whose son was kidnapped and murdered, and who was forced by police to accept an impostor as her little boy.

Though her performance was lauded, audiences have largely stayed away.

Why? The matrix is askew. She's simply too strong for us to believe her as meek and mousy. Not our Angie!

Viewers loved Iron Man in part because Robert Downey jun, whose battles with drug addiction had become the stuff of tabloid fodder, so deftly addressed and dispelled our images of him.

We watched Downey have his vodka and drink it too in a portrayal of a hard-drinking playboy that dovetailed with his past indiscretions.

In the Hollywood parody Tropic Thunder, Downey's playfully self-referential performance as a super-Method actor poked fun at his own vaunted reputation.

It is still questionable whether Tom Cruise will succeed in reinventing his matrix, with the audience's still-vivid memories of bizarre appearances with Oprah Winfrey (he jumped all over her couch) and the Today show's Matt Lauer (he called him a "glib putz" on air).

Fat, bald and bespectacled, Cruise presented a loathsome physical and moral specimen as a movie mogul, and the gambit worked.

As a form of career jujitsu, there's nothing like a self-deprecating, unflattering performance to win back estranged fans.

But Tropic Thunder was really just softening up audiences to accept Cruise in his most crucial role this year, in Valkyrie, about a plot to assassinate Hitler.

Cruise plays a courageous German military man, the kind of heroic, physically daring role that viewers once would have accepted him in without hesitation.

Now that he has done parodic penance in Tropic Thunder, now that he has apologised to Lauer, the only question is whether film-goers will be able to enter Cruise's matrix with confidence one more time.

Because a matrix can collapse. Just ask Nicole Kidman.

When we watched her trying to stop a cattle stampede in Australia, the suspense was not whether she would stop the cows but whether her forehead would move.

Kidman is beautiful in the film, but she doesn't click.

Part of the stardom matrix relies on actors being "relatable," embodying the audience's fantasies but also, as Marlon Brando once noted, providing viewers with "reflections of themselves".

(Brando understood the matrix, even if he didn't always navigate it adroitly. The matrix isn't new; back then it was just called the studio system.)

It's difficult to think of the last time Kidman reflected anything but her own icy strangeness, whether on screen or in publicity appearances in which Kidman, the wife of New Zealand-born country music star Keith Urban, talks about the joys of Tennessee and tag sales.

One star who has done some fascinating pre-emptive work on his matrix is Brad Pitt, playing a man who ages backwards in The Curious Case of Benjamin Button.

As if to anticipate the day when his fans won't forgive him for getting older, Pitt presents that image to them now, via prosthetics and makeup, so they can get used to it.

And as he gets younger, the 45-year-old Pitt slyly reminds them of the golden boy they first fell in love with in Thelma & Louise.

Pitt also manages to quietly tweak the off-screen story that has threatened to define him since his 2005 divorce from Jennifer Aniston.

Like all stars working within the matrix, Pitt has created a character of himself in "real life," a character that, while not entirely fictional, is every bit as manufactured and managed for public consumption.

Perhaps the boldest example of the stardom matrix at work is Clint Eastwood's corrosively self-referential performance in Gran Torino, in which he simultaneously celebrates and subverts a career spent playing the outlaw Josey Wales and Dirty Harry.

Eastwood has mischievous fun with the matrix in Gran Torino, turning it into a vertiginously self-referential hall of mirrors in which Kowalski snarls and spits his way to uneasy redemption.

That is, we're watching Clint Eastwood play an almost pathologically isolated, aggressive man whose very idea of what it means to be a man probably derives from watching too many Clint Eastwood movies.

Kowalski is merely the latest riff on a role that Eastwood has been defining over a lifetime.

His characters have never begged to be liked; here, Eastwood seems to be daring us to still love him.

Whether the audience will still love him after Gran Torino, it will still recognize the kind of gutsy move that has earned Eastwood the 30 years' worth of goodwill he's so audaciously risking.

More than any other star this year, the 78-year-old actor has proved willing to shake up his own matrix.

Instead of being trapped by audience expectations about his persona, he has been liberated by them.

Leave it to Dirty Harry to push the matrix to its meta extremes, just to the verge of blowing it up entirely.