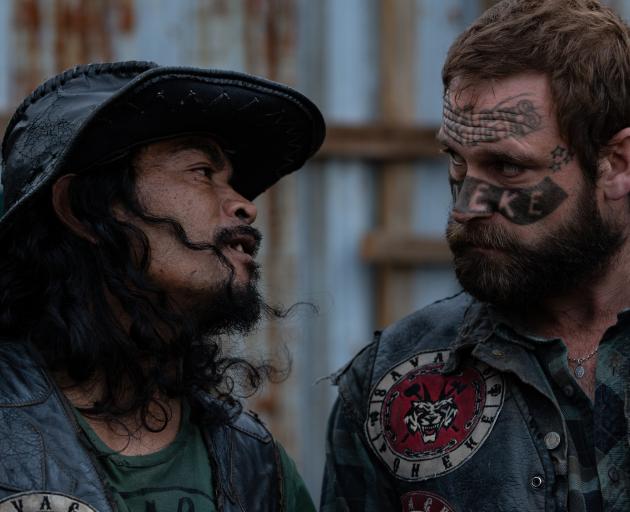 Alex Raivaru (left), as Tug, and actor Jake Ryan, as Damage, in a scene from Savage. Photo: Supplied
When Yvette Reid went to cast the film Savage, she wasn’t just looking for actors, she tells Tom McKinlay.

There’s a palpable authenticity about the cast of new New Zealand film Savage.

It speaks to the lengths to which casting director Yvette Reid and director Sam Kelly went to assemble their actors.

Indeed, Reid continued the search for some actors after she was meant to have finished. She’d had a baby at the time and maternity considerations were meant to have been paramount.

But they had yet to find the perfect player — despite searching the length and breadth of the country.

"They just hadn’t found the boy and so I was a little bit naughty and put out a casting call and got some photos sent to me."

She was given the OK by the producer to audition them.

"And then we found Lotima."

The film follows Moses and Danny from the moment they meet in borstal in 1965, through to their time as gang kingpins in 1989, top dogs in the Savages. It is set across three time periods, meaning three times the usual work for the casting director finding actors to play the roles at each point in the movie.

Writer and director Sam Kelly was determined the film would have the ring of truth in telling the story of the abuse and deprivation that first alienates young men, then drives them into gangs, Reid says.

It is past time when you can put fake tattoos on an actor and call them a gang member, she says.

"We did audition some people who had never acted before — never even thought of it until someone on Facebook tagged them into our casting call — who were great, who were amazing."

In fact, thousands of people replied to a casting call that specified no previous experience and no front teeth required.

Most films don’t go to quite such lengths when casting, Reid says.

"But then with other films it is not so important they have such an authentic look to the people, in order for them to be believable in that role."

This is a film about people who have grown up tough, lived hard lives and wear the scars and carry the demeanour that brings.

And anyway, the most enjoyable part of the casting game is turning up new talent.

It wasn’t just about finding the gnarliest collection of individuals out there.

"Even though we needed the guys to have that tough exterior to be believable gang members, in order to be an actor you need to have quite a high EQ, an ability to empathise and put yourself in somebody else’s shoes."

That proved easier for people who had put some distance between themselves and the gang life, Reid says.

"I did audition some people who had just got out of prison or recently left gangs and were trying really hard to turn their lives around. So the idea of being in the film was great but being in the film pretending to be a violent, intimidating person was not a safe space for them. I could kind of see that in the room on occasion."

In the end, though, Reid was really happy with the range of people who were cast.

"Creedence Phillips, he plays Dregs, he’s Mongrel Mob in the Mt Maunganui-Tauranga area, and he was amazing and a lovely guy, great to work with. And he has an agent now and is really keen to get more acting work."

It was a two-way street on set, Reid says, as the professional actors — yes, there are plenty, including lead Jake Ryan — had to learn how to behave in a gang setting and those cast from the community were learning how to act, full stop.

"Either way there was a lot of learning that was going to have to go on and both sides would be helping each other with that.

"That was the cooliest combo for me, the fact that we got to marry those two worlds and that they worked so well together."

Reid too learned a few things.

"I have had some emails in the last couple of years from people who are gang members and who went through borstal, who say ... ‘I’d love to tell you my story’. And the things they went through in those borstals were horrific. ... If you were to show everything no-one would stay in the cinema — you’d get up and go."

The film itself makes the nature of the abuse clear, without being unnecessarily explicit.

"The main thing for people to walk away with is to realise ‘we’re people’ — they are a result of their experiences. Unless you have had all their experiences you can’t say you wouldn’t be the same."