Stuck in a perfect world 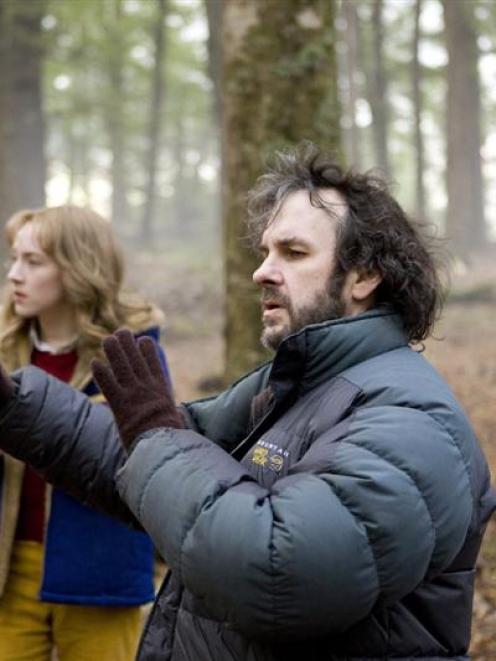 Saoirse Ronan (left) and Peter Jackson during the making of The Lovely Bones.
Peter Jackson has created a dream world, Rachel Abramowitz, of the Los Angeles Times, reports.

After young Susie Salmon is murdered by the local paedophile in The Lovely Bones, she ends up in a place easily mistaken for heaven, but what she discovers is that this magical terrain is actually an in-between state, "a place she's caught in until she can resolve the issues of her death", says co-writer Phillipa Boyens.

"This in-between world is a 14-year-old's idea of what an ideal world can be."

Boyens, along with Fran Walsh and director Peter Jackson, is part of the Oscar-winning troika that wrote Jackson's epic Lord of the Rings trilogy, and now the three return, with Jackson directing, to bring to the big screen Alice Sebold's best-selling novel about Salmon, played by Saoirse Ronan (Atonement), who watches her family grapple with her death from her perch in the hereafter.

In Sebold's novel, this vision of the afterlife is presented comically - Susie's dream world consists of a 1960s suburban high school, much like the one she would have attended, and she lives in a duplex with her room-mate.

Jackson's vision is a dream-like landscape filled with startling, otherworldly imagery, such as a giant ship in a bottle, much like the ones Susie built on Earth with her father, or a gazebo - where she was supposed to meet her crush, Ray - now in a foreboding lake of water, with the moon turned into a clock.

"One of the things that Pete wanted to do early on was invest this place with a sense of mystery. It's her secret desires," Boyens says.

"She's dragged her subconscious desires from Earth into this place, but she's also dragged the darkness and what happened to her."

"There's an iconography to the story that was very useful," co-writer Walsh adds, noting a recurring image of "the blossoming of the flower".

In the book, Susie's killer, Mr Harvey (played in the film by Stanley Tucci), is "associated with growing geraniums", and the film-makers used that idea but changed the flower to the more dynamic-looking camellias.

"Susie doesn't understand what it means. The audience doesn't either, but these things will and do make sense. It's the language of dreams. That's what we were trying for," Boyens says.

The startling images - shot by Jackson's fellow Oscar-winning Lord of the Rings cinematographer Andrew Lesnie and crafted by production designer Naomi Shohan - are a melding of computer imagery and the startlingly beautiful vistas of the South Island of New Zealand.

"She's running on a beach, which is a real beach in New Zealand," Boyens says.

"That lake is at the top of a mountain in the South Island. They helicoptered up there."

"It's the idea of being trapped in a perfect world," adds Walsh, pointing to the snow globe metaphor that opens Sebold's book, in which Susie pities the lone penguin locked in his plastic paradise.

"Susie's in her own version of the snow globe."