Teaming up for the big game 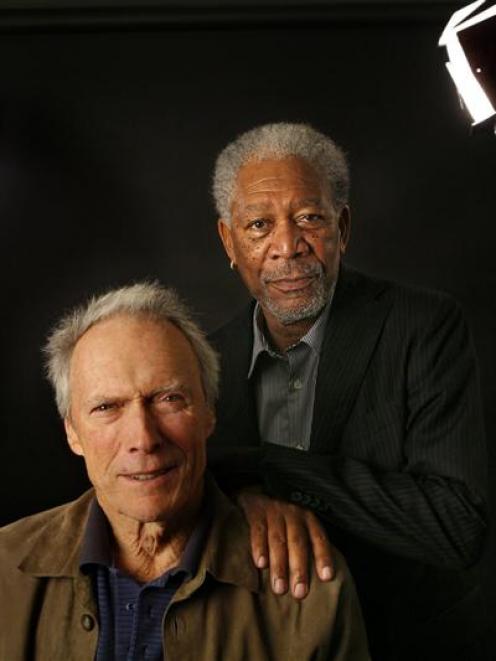 Clint Eastwood (left) and Morgan Freman. Photo by the LA Times.
It's a story well known in New Zealand. Now a couple of fabled United States actors are telling the rest of the world. Reed Johnson, of the Los Angeles Times, reports.

Tough guys - the old-school variety, that is, as opposed to today's preening pumped-up action heroes who yell out for a digital avatar when the going gets sticky - don't bark their thoughts in drill-sergeant cadences.

They speak them in low self-assured tones, befitting their muscular résumés.

Tough guys, at least those of a certain age, can be very mellow cats, sitting in the bar of the Carlyle Hotel, listening to jazz and munching peanuts.

That's where Clint Eastwood (79) and Morgan Freeman (72) were found on the occasion of our interview, the former attired in casual-wear, the latter decked out in a trim pinstriped suit, his long legs stretched across the seat of a corner booth.

Collectively, in the course of distinguished careers, they've played geriatric astronauts and battle-scarred Secret Service agents, no-name cowboys and a San Francisco cop nicknamed "Dirty" who taunted criminals he'd cornered at the business end of a .44 Magnum (Eastwood), as well as ruthless pimps, kick-butt high-school principals, a cool-under-fire president staring down a killer asteroid and the almighty himself (Freeman).

Last seen together on film putting a buffed Hilary Swank through a brutal regimen in Million Dollar Baby (2004), they reteamed for Invictus, a drama about a landmark South African rugby tournament, a film directed by Eastwood and starring Freeman in a different sort of tough-guy role: Nelson Mandela, South Africa's benevolent, but steely, first post-apartheid president.

"I liked him as a person the first time I ever met him because he was a fan of The Outlaw Josey Wales," Eastwood said.

"With Morgan Freeman, it's just a pleasure to watch every scene, every nuance."

"Working with Clint is like every actor's dream who knows anything at all about what he's doing," he said.

"A lot of actors think that they want strong directing.

"I can never quite figure out what that means.

"I don't want strong directing, except from the writer.

"And then I don't want the writer writing emotional reactions."

Invictus is their third joint outing, and award-season hopes at Warner Bros are running high.

They first paired up on Unforgiven (1992), galloping towards bloody revenge as ageing unreconstructed outlaws with a deep-seated bond.

"And the fact that they don't talk about the bond is what makes it good," Eastwood said.

The film earned him an Oscar for best director; it also won the best picture award.

The movie hauled off the Academy Award for best picture as well as Oscars for best director, lead actress (Swank) and best supporting actor (Freeman).

Ask them what makes for good film-making, and these strong silent types will turn downright loquacious.

An eye for spotting talent and knowing a good story.

Above all, perhaps, the will to hold fast to one's core convictions.

Those also rank among the principal themes of Invictus (the Latin word for "unconquered"), which takes its title and philosophical cues from an 1875 verse by British poet William Ernest Henley that concludes with the lines: "I am the master of my fate: I am the captain of my soul".

Mandela has said that the poem helped sustain him spiritually during the 27 years he spent imprisoned at Robben Island after being convicted for his anti-apartheid activism.

"How can a man spend 27 years in prison, then come out and forgive his jailers?" Freeman asked.

Because "they forgave him too.

"He was convicted primarily not because he was treasonous in his speech, but he was head of Umkhonto we Sizwe, which was the Spear of the Nation," the military wing of the African National Congress.

"He was a terrorist, as far as they were concerned," Freeman said.

"But he understood how to work kindness."

Indeed, Invictus quietly posits the radical idea that empathy, reconciliation and forgiveness can accomplish more in life than any amount of macho posturing or bullying violent behaviour.

Set mainly in 1995, the screenplay by Anthony Peckham recounts a pivotal event that unfolded during the intense opening months of Mandela's presidency.

The country still was struggling to master the abrupt transition from a society based on apartheid, or legally enforced racial separatism, to a colour-blind "Rainbow Nation" (in Mandela's formulation), in which all would feel welcome.

Meanwhile, South Africa's fledgling democracy was shaky, and many people feared civil war might break out.

Although blacks largely regarded the team as an odious legacy of the former white-minority ruling class, they ended up embracing the Springboks and cheering the team on to a stunning upset victory in the final against New Zealand's ferocious All Blacks.

To achieve his national unity ends, Nelson also had to inspire the Springboks players to stretch beyond their customary mediocrity.

He did this in part by forging a friendship with team captain Francois Pienaar, played by Matt Damon.

The film thus becomes, among other things, a study in leadership styles.

Yet while Invictus chisels its way through several profiles in courage, one hovers over the film: that of wily charismatic Mandela.

"He has some kind of brilliance that we don't know about that would make him take a long-shot bet and take big swings at the bat, and make things happen," Eastwood said.

"And he didn't seem to let anything get in his way.

"He just did what he felt was right."

Freeman's humanising portrayal of Mandela attempts to allow the extraordinary but flawed man to step out somewhat from his long shadow.

The actor had plenty of personal observation to draw on: He met Mandela in the early 1990s and has remained in touch through the years and considers himself a friend of the man black South Africans affectionately call Madiba, a sort of grandfatherly honorific.

"He's easier to play for me than it would be to play Clint Eastwood, whom I also know and have studied really closely," Freeman said in a voice suggesting the verbal equivalent of a wink.

"Because he isn't anything special outside himself, you know what I mean?

"Not himself. He's not on any pedestal.

"When I talk about him, this is one thing I remember him saying: He can't forgive himself for his failures, as a father, as a son.

"So that's very informative in terms of who the man is.

"Yeah, he responds to people, but he doesn't strut."

Freeman also brings to the role an imposing knowledge of southern African regional history, politics and culture, which he honed while shooting his directorial debut, Bopha! (1993), starring Danny Glover as a conscience-stricken South African police officer.

Invictus was shot on location in Cape Town and Johannesburg.

The hard part was finding a script that didn't sprawl all over Mandela's entire life.

He finally found it in an adaptation of John Carlin's book Playing the Enemy: Nelson Mandela and the Game That Made a Nation.

"I always felt that Morgan was the ideal guy and should play Nelson Mandela, even before there was a script," Eastwood said.

"It was kind of a conversation piece around the world.

"But nobody ever came up with it."

The only point about Invictus on which Eastwood and Freeman differ is whether South Africa's extraordinary, albeit still incomplete, racial and social rapprochement could offer a lesson for the US.

Eastwood, grimacing, registered his doubts about the current state of the union.

"Everybody's divided, and everybody talks about going across party lines and doing this and being this," he said.

"And we're fooling each other.

"You're talking to kind of a disenchanted guy.

"And if a third party came along and they did the right thing, I would certainly be right there with 'em.

"That's what attracted me to this story, because this is about somebody who moved beyond that c . . . ."

Freeman, taking all this in, offered a more upbeat assessment.

"I think in one position, one place in our minds or in our souls or in our psyches or whatever it is that makes us Americans, we're mired somewhere in the Dark Ages in terms of race," he said.

"But on a completely other level, we're not at all.

"We have completely transcended all of it.

"We are a completely integrated multiracial multicultural society.