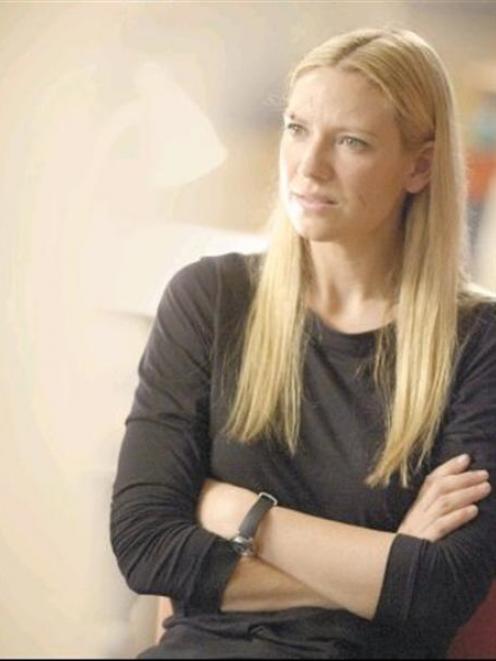 The low-slung motel looked like the sort of place Norman Bates might open as a north-of-the-border expansion of the old family business.

The roadside sign promised "TELEPHONES" in every room, but the brownish-orange carpeting and peeling paint were nothing to call home about.

The radioactive Russian cosmonaut in the parking lot, however, was something you don't see everyday.

"Who comes up with this stuff?" asked a smirking Joshua Jackson, one of the stars of the series Fringe, which returns on Thursday with the premiere of its second season of conspiracies and codes, parallel worlds and evil corporations, mad scientists and con men.

"Seriously, who are these people?"Jackson was waiting for the camera to start rolling again on a bright, crisp afternoon during an on-location shoot for a mid-season episode of Fringe.

Nearby, the show's other stars made idle chit-chat or had their makeup checked while a quartet of extras outfitted in FBI haz-mat suits practised their task - wheeling around a shiny metallic casket with ominous radiation stickers and assorted pseudo-scientific warnings in Russian.

Well, everyone involved hoped they were pseudo-scientific warnings.

"Can we get a translator and find out what this writing means, specifically?" asked Jon Cassar, director of the episode and an industry veteran with 59 episodes of 24 on his resume.

"Maybe it says `Do not open until Christmas' or `Watch The Simpsons on Sunday night'."

"The second year is much tighter," says Blair Brown, who plays the mysterious Nina Sharp, who may or may not be the villain of the show.

"The writing is wittier, more complicated, but also there's clarity to the stories and character.

"And we are all speaking with quite different voices. The rhythm of show is clear now."

Early on, Fringe was neither fish nor fowl (nor was it amphibian, like those strange frogs in the opening sequence).

The show possessed the same trench-coats-and-autopsies ethos as 1990s sci-fi show The X-Files, but it was also informed by more recent, purer procedurals, such as CSI: Crime Scene Investigation and even Bones, which teams a federal agent and laboratory oddballs but with far more flirting.

Lance Reddick, a tall, lean actor whose withering scowl is known to viewers of The Wire and Lost , portrays Phillip Broyles, the federal agent who supervises the "Fringe Division", which investigates teleportation, telekinesis and, well, anything that would have been filed under the letter "X" in Fox Mulder's basement office.

Reddick said as cast members found their characters and the writers sharpened their intentions, Fringe became its own series as opposed to a well-polished collage of other shows.

"We found who we were in episode 10, the episode where Olivia got kidnapped," Reddick said.

"We were trying to hedge our bets and trying to be too many kinds of shows at once.

I'm not saying we got rid of the procedural element because each episode still is on a case - a case in terms of the quote-unquote police work - but it's not formulaic, not like the early episodes.

What keeps the show most watchable is the fact that it is character-based."

Those characters have kept critics on the side of the show even when Fringe left viewers rolling their eyes or scratching their heads.

John Noble, in particular, has been a sensation as the kooky, scene-stealing Dr Walter Bishop, who was extricated from an mental hospital to help solve the mysteries of fringe phenomena, which are becoming more frequent as part of a worldwide pattern that is a key thread in the show's larger tapestry.

Critics have been as uniformly kind to Anna Torv, who plays FBI agent Olivia Dunham.

In person, Torv is much more reserved than her two lead co-stars.

"I'm all serious; they have all the fun," she said with a wink of her buttoned-down character but perhaps referring a bit to herself as well.

She said the job of working on a creepy sci-fi show does have its perks however: "The other day Olivia got to eat worms.