Game companies back with the glitz 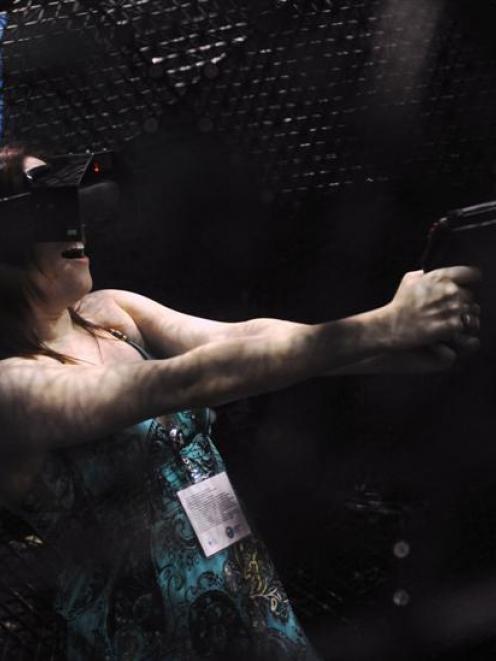 An attendee tries out the 360 Virtual Ventures' Virtusphere.
The Electronic Entertainment Expo shrank into the shadows in 2007, after some game companies sobered up from the wretched excesses of previous shows with their ear-splitting demos, scantily clad models and million-dollar parties.

This year, publishers are throwing caution overboard and plunging back into spectacle mode.

Think of the exuberance as the industry's way to shake off the recession torpor that has inflicted more damage on game sales than a space Marine in Halo, with United States sales down 11% in the first four months of this year, and a stomach-churning 26% in April, according to market search firm NPD Group.

Although E3 did not officially begin until last Tuesday, the week's festivities began the previous Sunday night with Microsoft's literal circus performance by Cirque du Soleil for its Project Natal game technology.

On Monday night, Activision Blizzard put on a bash at the Staples Centre featuring a performance by Usher.

However, the main attraction for game fans was the stuff on display at the official show in and around the Los Angeles Convention Centre.

Limited to industry professionals and the media, attendance was less than 50,000, roughly the same as last year.

Some trends to watch for:

Following in the footsteps of Guitar Hero, a number of music games will launch with new controllers.

A start-up called First Act will show off an actual guitar that can be played as an instrument or used to control a game called PowerGig: Rise of the SixString.

Another start-up from Calabasas called Music Mastermind will show off an app that lets players hum a melody that the software converts into notes played by a variety of digital instruments.

And MTV is expected to show off new controllers for the latest sequel to its Rock Band franchise, including a keyboard.

Return of the shooter

For the last few years, game companies have devoted much of their attention to drawing casual players with new types of games.

Now, there is a renewed focus on fighting for the big spending, mostly young and male hard-core players who love new ways to blow things up.

While Activision will launch the seventh sequel to its annual Call of Duty series, Electronic Arts is reviving Medal of Honor, which launched the World War II action genre, and bringing it into the present-day conflict in Afghanistan.

Epic Games will show off a new science-fiction action game called Bulletstorm that promises "over the top action moves".

Microsoft's Halo: Reach will be the last version of that long-running series from its creators at Bungie Studios.

Sony will take another stab at making its Killzone franchise as big as the dominant Halo with Killzone 3.

And iD Software, creator of Quake, will show off a long-in-the-works post-apocalyptic shooter called Rage.

Even Nintendo, best known for family-friendly titles, is going after the hard-core demo with a sequel to its dormant Metroid franchise titled Other M.

The industry is taking advantage of the internet more rapidly than traditional Hollywood.

In fact, it will be hard to find a big new title at E3 without some online component.

None are as huge, however, as Star Wars: The Old Republic, a massively multi-player online title from LucasArts in which millions of players can interact in a game set thousands of years before the famous film trilogy.

Meanwhile, Lego Universe, developed by NetDevil, is aimed at drawing kids into the genre with one of their favourite toy brands.

Several new services, including OnLive, InstantAction, GaiKai and GameStreamer, are promising to deliver high-quality games entirely over the internet with no discs required.

All will come up against skeptical gamers eager to see if the services work as promised - without the kind of connection hiccups that can ruin "twitch" games.