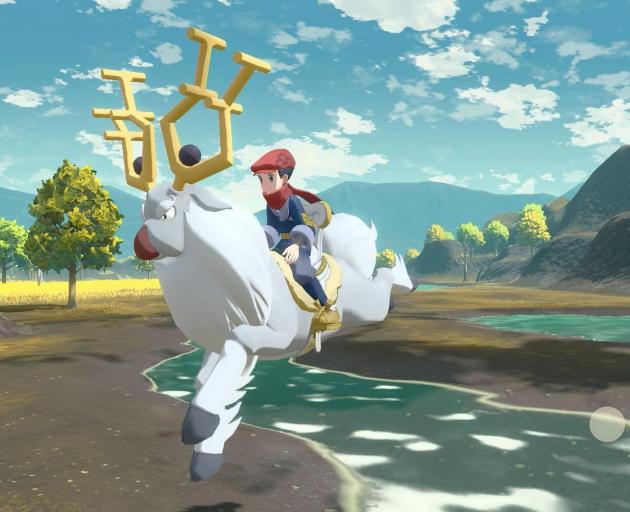 From: The Pokemon Company

That should be self explanatory, it is a video game. Video games should be fun.

But somewhere in the 18 years that I have been playing Pokemon, the games became joyless.

Swept up in temporary gimmicks, a lack of agency and a structure that held your hand, Pokemon lost me.

I returned to the old times, playing the Gameboy Advance and Nintendo DS games on my lunch break, but the magic had gone. Pokemon felt like just something to do, rarely ever something fun.

But Pokemon Legends: Arceus is fun.

The game strips the formula down to basics. Your job is to catch, battle and train pokemon to assemble the world’s first Pokedex, a scientific record of each and every pokemon in the historic Hisui region.

To do so you’ll need to catch a lot of them — hundreds, even thousands. But that is all part of the fun.

No longer are you trudging around in long grass, playing out each and every battle. Instead you are given agency to capture Pokemon in a variety of ways, whether that be sneaking up and throwing a pokeball at their back or luring them in with a tasty treat you crafted from plants around the area.

You are more than welcome to take a more chaotic approach and run around throwing pokeballs at everything and seeing what you catch.

Never before have I felt compelled to fill a pokedex. My replay of FireRed last year had me pulling my hair out in frustration when I learned the postgame content required me to catch 50 different Pokemon. 50!

But in Legends: Arceus catching Pokemon is the focus, and the fast paced and diverse style finally makes me want to catch em’ all.

You’ll also be fighting Pokemon, but the upgrades to the combat system remove a lot of the sluggish and painful elements that plagued the system before.

No longer are battles simply a back and forth. The addition of fighting styles and a turn order allows you to tactically plan out attacks, sacrificing power for a second turn or betting it all on one strengthened blow.

There are many quality of life improvements, from changing nicknames and movesets on the fly to revamping the tedious EV and IV system that dictated a Pokemon’s stats in former games.

The Pokemon featured in the game feel carefully chosen to fit naturally into both the setting and the art style, and many feature updated forms or evolution paths that add a bit of excitement to each new discovery.

There are also huge Pokemon, called alphas, that activate a child-like ‘‘big monster cool’’ part of my brain. I want to catch every Pokemon and I want to catch them as big as possible.

As you progress you’ll unlock new rideable Pokemon, allowing you to climb mountains, cross the ocean and soar through the sky, which opens up the explorable areas even more and keeps you coming back to old zones to see what else is hidden away.

Throughout the game you’ll be helping the people of the Hisui region, who, lacking a pokedex, know next to nothing about the creatures around them.

There are plenty of other things to do as well, from dressing up your character to capturing the perfect shot in the photo studio. Nothing makes me want to complete a side quest more than more clothing options.

The setting and story are reminiscent of the 2006 Diamond and Pearl games, which were remade last year. Combined with the new gameplay style, the game feels like both a breath of fresh air and a love letter to older games.

The main story missions are mostly simple and repetitive, and the boss battles play like a comically easy Dark Souls boss, but that was rarely why I was playing the game.

I was playing the game because I wanted to catch Pokemon.

And I was catching Pokemon because it was fun.

A word I hadn’t associated with Pokemon for a long time.