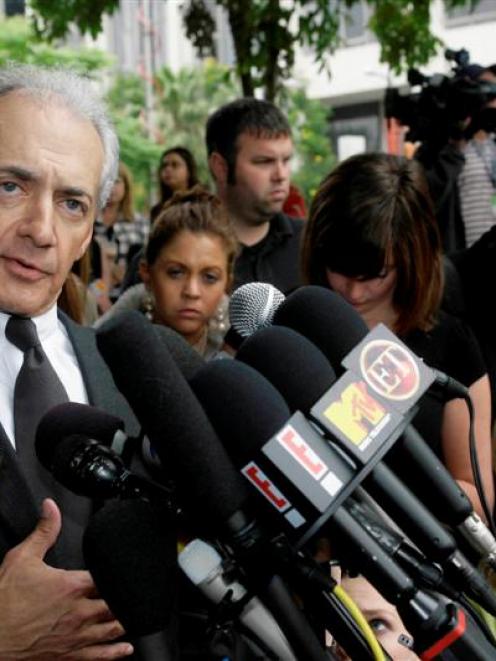 Mark Vincent Kaplan says the media interest in Britney Spears has saved him up to $1 million. Photo by AP.
Kevin Federline's attorney can't complain about the intense interest in his client's child-custody battle with Britney Spears.

He doesn't grumble about the television trucks and news reporters swarming the courthouse every time there's a hearing, or the paparazzi who hound the pop princess every moment there isn't.

And he's certainly not opposed to the TV reports, tabloids and Web sites that have documented every shred of the case that has consumed him for the past 18 months.

After all, the attention has saved his side some major cash.

"If I had to hire an investigator or investigators to provide me with the intelligence about what's going on, where they are, how are they doing," said Mark Vincent Kaplan, "it would be north of half a million to a million dollars ... as opposed to buying People magazine for $3.95 on Thursday morning or going on TMZ."

On May 6, the 61-year-old attorney emerged from Superior Court in Los Angeles where, for the first time in months, there was positive news to report about the former couple's custody tug-of-war: Spears was to have longer visits with her children.

The change, he said, was "recognition of the progress that has been made, a progress in structure and stability."

Days later, he sat down with The Associated Press at his high-rise office near Beverly Hills, California, letting on that those inside the case were viewing it through the same prism as the rest of us.

"Everyone who had a big toe in this case at every level followed what was going on by looking at the web sites," he said.

Spears has always been an irresistible media target, but the 26-year-old's split from Federline launched a series of antics that amplified coverage of her life.

The pop star appeared in public without underwear, shaved her own head at a salon and beat a car with an umbrella. She checked in and out of rehab, got into fender-benders, inexplicably spoke with a British accent and made a paparazzo her personal companion.

Twice she was rushed by ambulance to local hospitals, drawing hordes of helicopters each time.

"No other case has had the media addiction and frenzy that surrounded this case and these people 24-seven," he said. "There's never been anything like this, and there probably won't be for a while."

Each bizarre episode formed a new wrinkle in her custody dispute, and each twist prompted a new round of news reports. The press swarmed whenever Spears was allowed to see 2-year-old Sean Preston and 1-year-old Jayden James, and she was not averse to trotting the tots through known paparazzi hot spots.

In January, after her second hospitalization, Spears' visitation rights were suspended completely; her father, Jamie Spears, legally took over her personal and financial affairs in a conservatorship - a legal designation normally reserved for cases involving the elderly and infirm.

But in the ensuing months, she has avoided the harsh spotlight, instead spending time with family and even finding success in a cameo role on television's "How I Met Your Mother."

The scene at the May 6 hearing was so low-key as to be almost anticlimactic. The tide had apparently turned, not only for Spears, but also for the horde that was feeding off months of high drama.

It was a long time coming.

While the frenzy may have abated, it hasn't completely dissipated, in part because the case is continuing in open court rather than before a private judge, where celebrities often choose to settle their private affairs. Kaplan says that's happening for reasons he can't discuss.

One of the effects, however, is an evolution of Federline's public image - from the guy who caused the downfall of America's pop princess, to the more stable, responsible parent in an ugly situation.

"I think when the media saw that here's a guy who stepped up to the plate, not just because he had to but because he wanted to ... I think they gained a respect for him and that really turned them around a lot," Kaplan said.

"It was at that time that I knew that this was someone that I believed in who was taking on a cause that I believed in," Kaplan said. "I realized that, in order to achieve the goal that he had regarding custody, that we couldn't get from point A to point B without passing right through the center of the American dream."

With A-list resources, Spears has employed a revolving door of representation, including four family law firms and some 15 attorneys throughout the case, while Kaplan and his partner, Jim Simon, have been the only two fighting for Federline. Spears was forced to pay most of his legal bills, and as of last month, Kaplan was still due $343,834.

When Federline, who has two other children from a previous relationship, won sole legal and physical custody of Sean Preston and Jayden James in January, it was a victory for Kaplan & Simon, LLP. And it was merited, said Connoly Oyler, a veteran Los Angeles family law attorney who is not involved in the Spears-Federline matter.

"In Spears' case, with the emotional breakdown that she had, that's a legitimate reason for one parent to say, 'I want sole legal and sole physical (custody), because the other parent is not physically or psychologically able to take care of the children,'" he said.

Despite the overabundance of drama and media, the Spears-Federline case does share one thing with other custody disputes, Kaplan said: It's a battle over the welfare of children who don't grasp what's going on around them.

"The bottom line is you've got two kids ... who don't know and don't care and should never have to care about who their parents are," he said. "They just want to be safe and secure, nurtured and bonded with their parents just like any other kids."

Kaplan said he's proud of what he and Simon have accomplished for Federline. The case is arguably among the most significant in the attorney's 34-year career, and Kaplan said it has inspired personal satisfaction and professional growth.

"Very few lawyers get the opportunity that this case has presented on every possible issue you can think of," he continued. "Even fewer lawyers recognize the opportunity, and even a smaller percentage of those have the (guts) to go for the opportunity."

Of course being around celebrity has perks of its own.

"It's made it possible to not have to make reservations at a restaurant," he said, "but that too shall pass."