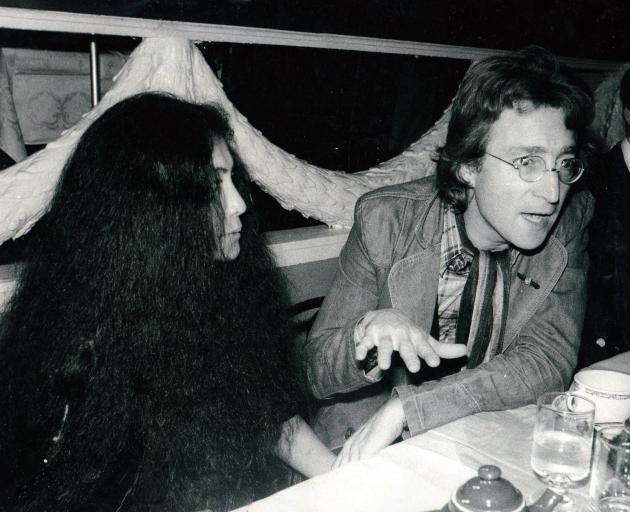 Yoko Ono and John Lennon in New York City. PHOTO: GETTY IMAGES
It was a courtroom drama with two towering protagonists. In one corner stood a record mogul with a history of violence and Mafia links who was notorious for stealing musicians’ work. In the other corner stood a Beatle.

The battle between John Lennon and Morris Levy, the boss of Roulette Records and inspiration for a ruthless music mogul in The Sopranos, played out over several months and culminated in 1976 in New York’s district court.

It attracted little attention at the time, but now the lawyer who represented Lennon at the hearing has told the inside story of the case, revealing details of how his client prepared for the trial and his determination to stand up for fellow musicians who had been cheated out of their royalties.

Jay Bergen, who was a trial lawyer in New York City for 45 years, said that was one of the reasons Lennon did not want to settle.

"He wanted to try to put an end to some of these really bogus lawsuits and a pattern of managers, publishers and record companies who stole royalties from their artists, particularly the black artists."

Levy was notorious within the music industry and beyond: he beat up a policeman, causing him to lose an eye, but the criminal case disappeared mysteriously from court records before being brought to trial.

He was a "business" associate of Vincent "The Chin" Gigante, the reputed head of the Genovese crime family, and inspired the character of ruthless record label boss Hesh Rabkin in The Sopranos.

Next month, Bergen is publishing Lennon, the Mobster & the Lawyer: The Untold Story, which draws on thousands of pages of trial testimony and notes. They were stored in his garage and, returning to them recently, he realised that "Beatles fans would love reading the testimony" because itwas a largely "untold story".

"I have all of the transcripts, and I spent hours and hours with John."

Bergen’s copious notes record Lennon telling him "I want to be rid of him. I’m tired of these phoney legal cases. I want to put a stop to them ... I don’t want to do any deals with Morris. He wants to cheat me like he’s cheated other singers and songwriters."

The case was sparked after Levy claimed that the Lennon and McCartney song Come Together infringed the copyright on Chuck Berry’s You Can’t Catch Me, owned by Levy’s publishing company, Big Seven Music.

It centred on a few words from the lyrics, despite different connotations.

To stop the case going to court, Lennon had agreed to record three of Levy’s classic songs on his Rock ’n’ Roll oldies album, on which he had been working.

As Levy kept pestering him, Lennon gave him "rough mix" recordings, telling him "they’re not the final version of my album. I might have to delete some crummy tracks".

To his dismay, Lennon was cheated. Levy released them as an unauthorised record, Roots, claiming that they had a verbal agreement.

The clash led to a lawsuit and countersuit between them.

Bergen remembers telling Lennon that the judge was a classical music lover who played the harpsichord.

"We’ll plan your direct testimony so it’ll be a tutorial on the Beatles. It’s important that he knows what you and the other Beatles have accomplished."

"It’ll be easy for me to communicate with him about music. That’s wonderful that he plays the harpsichord," Lennon replied.

Lennon threw himself into preparing for the trial, giving a testimony that detailed his creative process. He spoke of having "a pretty good reason" for choosing each song on the Rock ’n’ Roll album.

He dismissed the unauthorised record as "shoddy", arguing the Beatles "would not let something that looked or smelled like this be anywhere near the public".

On August 10, 1976, the final judgement dismissed the claims against Lennon, awarding over $400,000 in damages against Levy and his company to both Lennon and Capitol/EMI.

"Many executives, artists and managers feared him. His underhand methods and mafia connections were well known. Yet John Lennon had shut him down.

Levy was later indicted on extortion charges and sentenced to 10 years in prison. He died before beginning his sentence.