Boss back, but not to his best 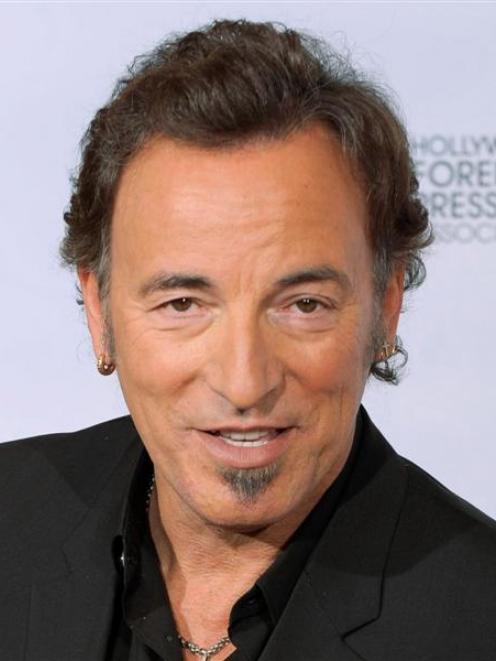 Hear me out, ye who would argue Beatles-Dylan-Marvin-Brian Wilson-Who-Pink Floyd-Stones: those artists might have made superior individual efforts, but none has used the long-player form more powerfully over a career, not only to establish a world through song, but to inhabit an enduring persona.

A string of hit singles alone wouldn't have made Springsteen the bard of America's slide from industrial-era swagger into service-economy anomie.

He needed the track-by-track architecture of albums to flesh out characters, relate each to the other, extend metaphors and build a palpable, detail-strewn landscape through which they could travel.

The album format also has allowed Springsteen to build a sound, both with his stalwart E Street Band and in more minimalist projects.

But the album era is over.

Working on a Dream, Springsteen's 16th studio album, is not merely a response to this fact.

Working on a Dream rejects the finer points of literary-minded album rock and aims for the instant effect of a string of hits.

It's a charmingly quixotic move; barely anyone has hits in these dark days of the music industry's decline, and especially rockers over the age of . . . how old are the Jonas Brothers?

So give Springsteen credit for even trying.

But the enthusiasm he and his team bring to these tracks doesn't redeem them.

The best thing that can be said about Working on a Dream is that it's boisterously scatterbrained, an exhilarating but minor work.

Only a great artist could make an album that's at once so stirring and so slight. This is the Boss, after all; he can wring meaning out of a tea-towel.

And he's obviously enjoying himself, recalling the radio hits of his youth and applying their glitter to his template.

But he gets lost in the idea of pop, forgetting to attend to the little details that pump blood into his best work.

There's a lot of variation on Dream, as befits a foray into the singles game.

Outlaw Pete is Southern rock done up with symphonic pomp.

If there's a model for this music, it's Girls in Their Summer Clothes, the best song on Magic, Springsteen's previous album.

Brendan O'Brien's organising hand contained the floridity of the E Street Band, and Springsteen, trading in his troubadour's drawl for a crooner's open throat, found the plain-spoken truth in pop's sentimentality.

Several songs on Dream aim for the same exquisite mood as that one, and occasionally - on love songs This Life and Kingdom of Days - Springsteen and crew come close.

But they're just as likely to overdo it.

Queen of the Supermarket, the album's low point, illustrates the consequences of over-flavouring a song. Roy Bittan's meditative piano opens the track, which has Springsteen moving among the aisles stealing glimpses of his grocery-bagging Beatrice.

Had it stayed that spare and mellow, the song might have produced chills.

Instead, disco strings, mounting backing vocals and pounding drums turn it into a Broadway number.

It's The Wrestler, the bonus track that won a Golden Globe for its appearance in the film of the same name, that most clearly realises Springsteen's undying gift.

Tacked on to this shiny package, the song is old-school Springsteen: a terse ballad about a beautiful loser, simply arranged around acoustic guitar and modulated keyboards, that gently builds into a secular hymn.

It's the kind of song that says more than its words convey because the listener knows it's part of something bigger.

Somewhere - in this case, in a film, but also in the other songs Springsteen has written that give a different bruised face and gritty voice to the same man - the story continues.

Springsteen might be bored of being their champion, but nobody serves them better, even still, than he.